Travelling around the Philippines with kids 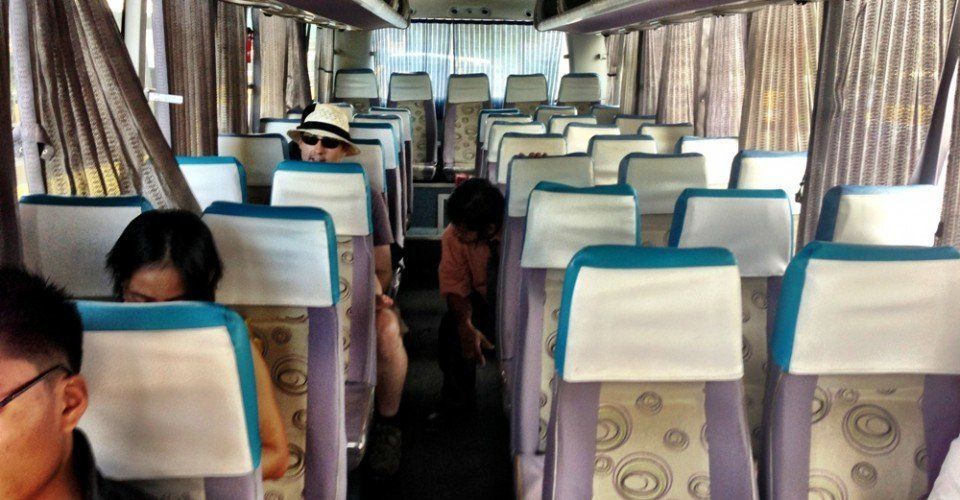 We had lots of fun in the Philippines trying out the local transportation.  Thankfully, it was as easy as we hoped!  This information is from our experiences primarily travelling round the island of Panay.  Panay sees a lot of tourists, thanks to Boracay, so it wouldn’t surprise me if things may be a bit easier and nicer here than some of the other islands. 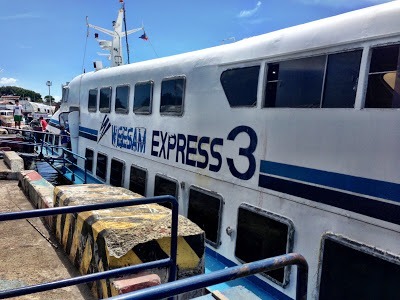 The boat we took from Iloilo to Bacolod

Porters were readily available at bus/van terminals and piers which made things a lot easier for us.  They would often just rush in, going for our bags (to help, not steal), so if you don’t want paid help, you may have to be quite firm with them.

There are lots of budget domestic flights in the Philippines with some crazy cheap seats, so flying is definitely a viable option.  Most involve flying through Manila/Clark or Cebu though.

On this trip we flew three different budget airlines:  Air Asia, SEAir (part of Tiger Airways) and Cebu Pacific Air.  They were all fine.  Cebu impressed us by playing a game onboard!!  They also get a gold star as they moved us out of the check in line, straight to a desk and then escorted us through the airport to the departure gate!! Yay Cebu!

One thing to note is that most, if not all, airports in the Philippines have departure taxes that have to be paid at the airport for both domestic and international flights.  Don’t be caught out by this (we were)!!  They ranged from 150 – 450 pesos per person for us, and infants were sometimes charged too. 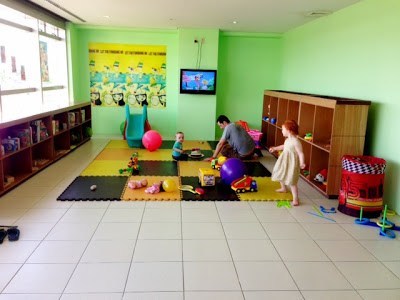 There are two options in Panay when travelling between cities – taking a bus or van.  The vans are supposed to be faster, but pricier.  In our experience, I dont think there would have been much of a time difference.  Neither vehicle stopped much and was fast when it did. You can also hire private vans.  We did not enquire about this but from reading online, you are probably paying around $100 for a journey.

My suggestion would definitely be to go with the buses where possible though.  Sooooo much more comfortable.  They were cheaper, a/c, comfortable and had luggage compartments.  On the Caticlan – Kalibo – Iloilo route, they also showed english movies and have free wifi, although I think some of the Roxas – Iloilo ones might have too.  If it did take longer, it was worth it for the extra comfort.  There is no room in the vans for luggage bigger than a small backpack.  We had to purchase a seat for our suitcases.  It was much less hassle catching a bus.

Boats are obviously very common in a country made up of over 7000 islands!!

We took boats between Caticlan-Boracay and Iloilo-Bacolod.  It was very easier to do, we felt safe and comfortable.  There were terminal fees, although this was included in the Iloilo-Bacolod ticket price.  Luggage was annoying, but there were people there to help you with it.  You weren’t allowed to have luggage in the seating areas.  On the small boats that went to Boracay, they went on top of the boat (not sure what happens when it’s raining!).  On the fast ferries, they went just outside the seating areas.  It did not seem all that secure to me. 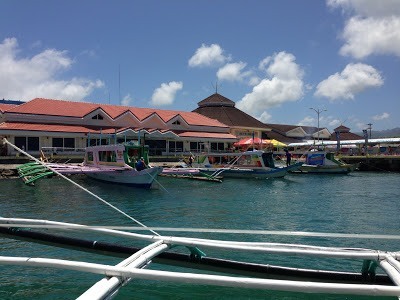 Caticlan pier with boats waiting to go to Boracay

This journey required a tricycle to the ferry, a ferry ride, a bus, a van and then another tricycle!

The tricycle ride back to the ferry seemed a bit more adventurous this time, when I had to ride side saddle on the motorbike behind the drive.  It spooked me a bit really as I am terrified of motor bikes.  Anyway, all’s well that ends well!!

The ferry back to Caticlan and the bus to Kalibo was all the same as the way over.  You can read more about that here: Getting to Boracay

On arrival in Kalibo, we were told there were no buses to Roxas, only vans.  This seemed to be true as there were vans everywhere, but we couldn’t see any buses.  This was a disappointment, as the buses were so nice and we worried how squished we would be in a van.  Anyway, someone helped us get down the road a little way with our luggage where we boarded the next van bound for Roxas.

The van wasn’t as cramped as we feared.  The four of us shared the back seat with another man.  We had our backpacks squished at our feet, our pram was in the small area behind out seat and the suitcases took up a seat (which we had to pay for).  It was far less cramped than ones I have caught elsewhere in the world.  The journey was bumpy though.  It would not have been good if you get motion sickness, especially sitting at the back like we were.

The journey was reasonably painless and 1.75 hours later, we had made it to Roxas City.  Not that it looked like a city.  More like a small town.  There were lots of tricycles on arrival (unfortunately no taxis).  We thought we would have to hire two, as they were smaller than the ones in Boracay – only one seat which didn’t even fit both of our adult butts.  This was not the case though as they managed to squish us all and our luggage in this one: 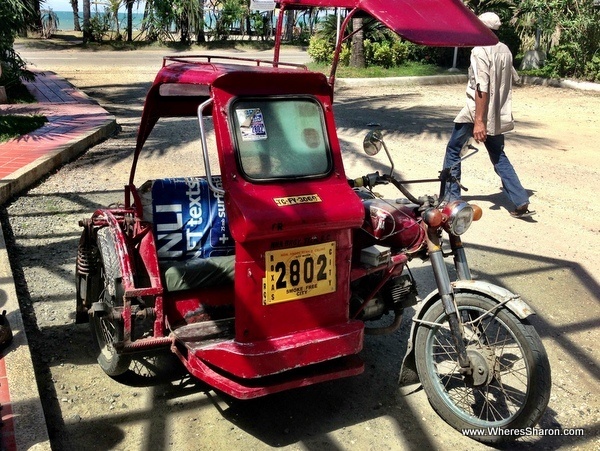 What we managed to squish of us, a driver and our luggage into

It was not very comfortable, and the journey was painful. S was so close to losing it that I was worried that she would have a big tantrum and knock the guy off his motor bike or something and we would all crash!!

We stayed at San Antonio Resort in Roxas City which was excellent value and right across the road from the beach and yummy seafood shacks. Here are the latest prices.

Read more about our time in Roxas City.

Practical Information
Tricycle to ferry in Boracay 100 pesos
ferry to Caticlan – adults   125 pesos (including terminal charge)
bus to Kalibo – adults 107 pesos
van to Roxas – adults 120 pesos, our suitcases were 120 pesos too since they took up a seat
Tricycle to San Antonio – 150 pesos
Our kids were free for everything

This journey was much simpler.  Just a tricyle, bus then a taxi.

We could have taken a van, but we decided on a bus due to the reasons listed above.

The buses were unfortunately not as nice as the ones we caught to and from Caticlan, but they were still good.  They didn’t play videos, and they had 5 seats across the row instead of 4.  It was more comfortable than the vans though, and it never completely filled up so we had seats for the kids. 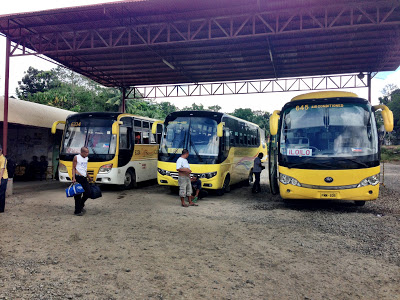 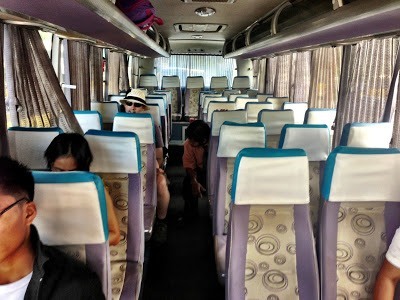 They seemed to leave very regularly, and we had no problems getting on one.  There were people who helped us with our luggage (for a tip of course) at the “terminal”.

The journey was fine.  Bumpy at times, especially towards the end.  We were finally less than 30km from Iloilo and we had to make a big detour due to something being wrong with a bridge.

We were very very happy to find taxis on arrival in Iloilo, the first ones we have seen in Panay – all the other towns seem to have tricycles and thats all.  Tricycles are fine for short journeys, but they are trying for longer ones.  There can be a lot of dust in the air which makes them unpleasant.  Plus, we are squashed on them.

The taxi was great and 15 minutes later, we were at our hotel.  Yay! Read more about Iloilo.

We stayed at the Day Hotel in Iloilo which was conveniently located above a shopping centre – check out the latest prices here.

Bus was 168 pesos per adult, our kids were free, but they also charged us a 20 peso luggage fee.  I think this may have been a con though.  It took about three hours

Taxi was 250 pesos.  I wouldn’t be surprised if this was a rip off but only so much you can do with all of us and our luggage

Philippines wrap up and how we are all going 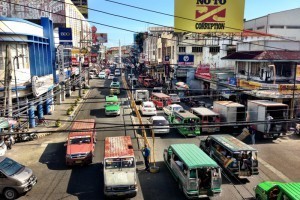 We enjoyed our time in Iloilo very much!! It really isn't that exciting a place.  I think our enjoyment more came...
Copyright 2013 Jupiter Premium Magazine Theme
Back to top