Things to do in Manila with Kids during Holy Week 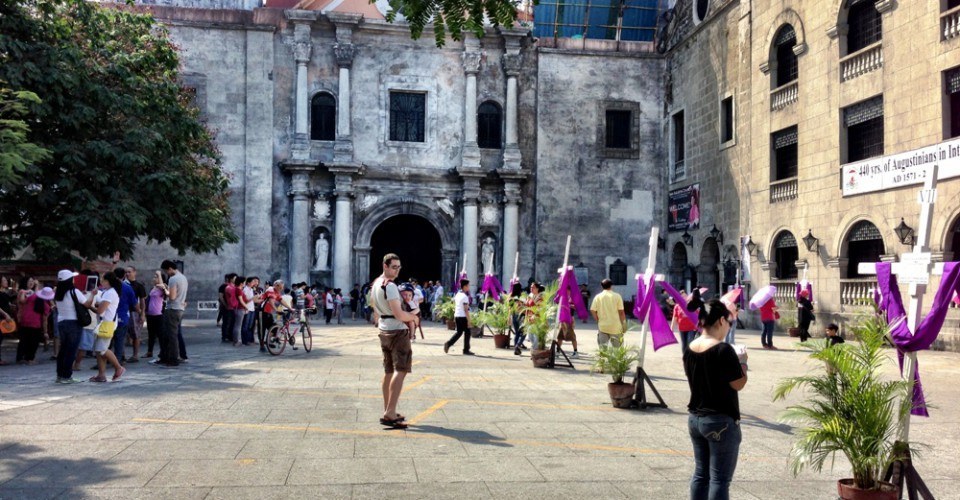 Manila is a big city with a big reputation. 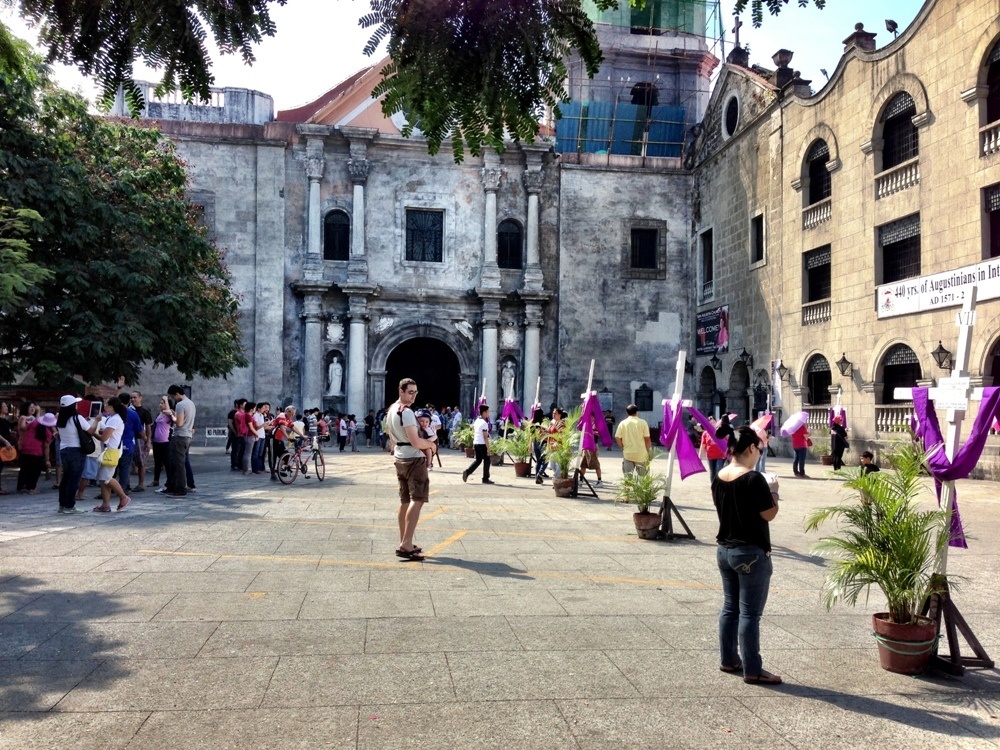 San Agustin and stations of the cross (and J and Z)

This megacity was not somewhere I have ever been keen to visit, and I probably would have been quite weary about our time here, if it wasn’t for the fact that it was Holy Week and I was worried everything would be shut while we were there (the two biggest public holidays of the year in the Philippines are Maudy Thursday – the day we arrived – and Good Friday).  Thankfully, everything wasn’t shut, the city wasn’t completely empty, and even better – I didn’t waste time worrying about being scared!!

J had hoped to make it to a crucifixion ceremony in a nearby town on Good Friday.  In this ceremony, people are actually crucified for a few hours and it is a big event.  He was still not feeling well enough to go that far though. Instead, we visited the following…

Things to do in Manila with kids 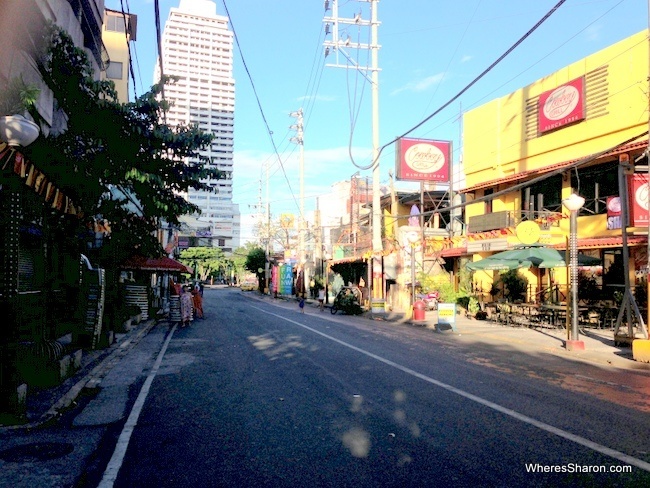 Street near our hotel

This is the area where we stayed.  It is meant to contain the bulk of Manila’s tourist infrastructure, although you wouldn’t know it!

I didn’t find the area pleasant at all, although it was quite shut up while we were there.  It was smelly with lots of garbage. It is very difficult to walk around with the kids.  I don’t think it would be possible with the normal amount of traffic (things are meant to be pretty dead at the moment due to Holy Week). 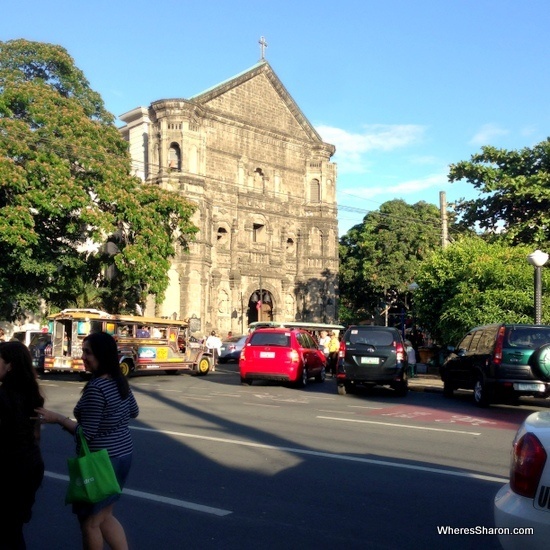 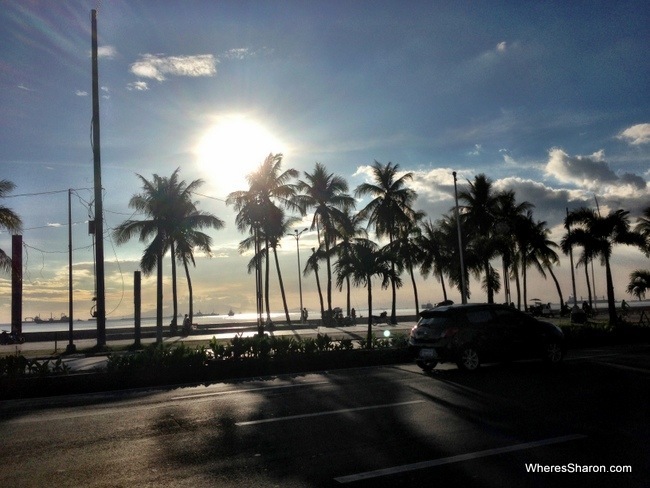 Intramuros was founded in 1571 by the Spanish.  It is a walled city with a big fortress and is a different world to surrounding Manila.  There are big, impressive churches, buildings, cobblestone streets, plazas and government buildings.  I felt like I was in Latin America, rather than Asia, when we were there.

It would probably have felt more like Spain, if not for the rubbish and smell, which was less in this area, but still around.  The area was destroyed towards the end of WWII, but was rebuilt. 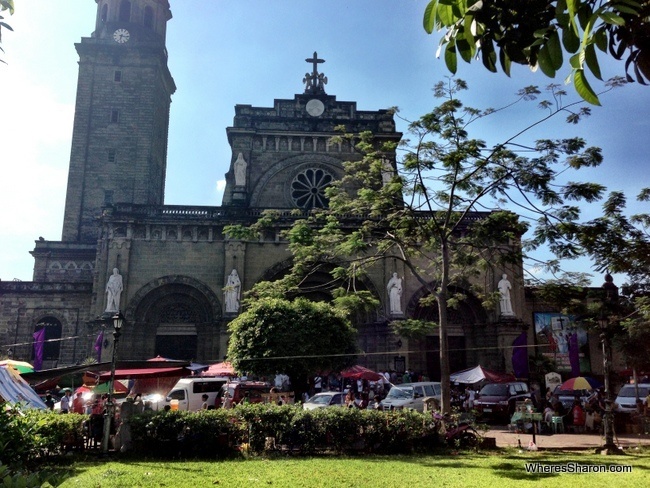 Manila Cathedral – only built in 1951, although you wouldn’t know it! 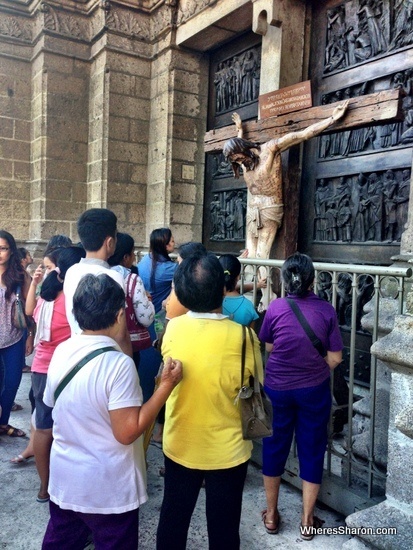 Manila Cathedral – the closest we go to ti

It is a pretty area, and Good Friday was a great time to come!  One of the streets was sealed off to vehicles and full of little stalls. There was a festival atmosphere, and it was a great place to wander.

We also visited San Agustin Church which was lovely.  It is the one building that survived WWII.  It was the kids’ first time in a church, and S loved it and didn’t want to leave.  There was meant to be a procession later, but we didn’t know what time and couldn’t hang around all day anyway unfortunately. 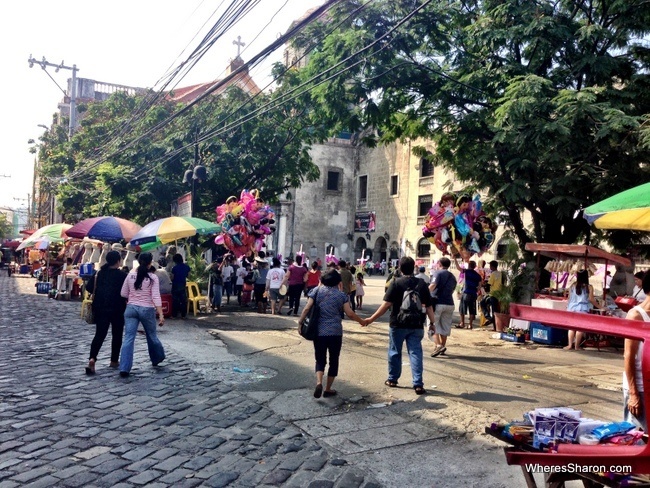 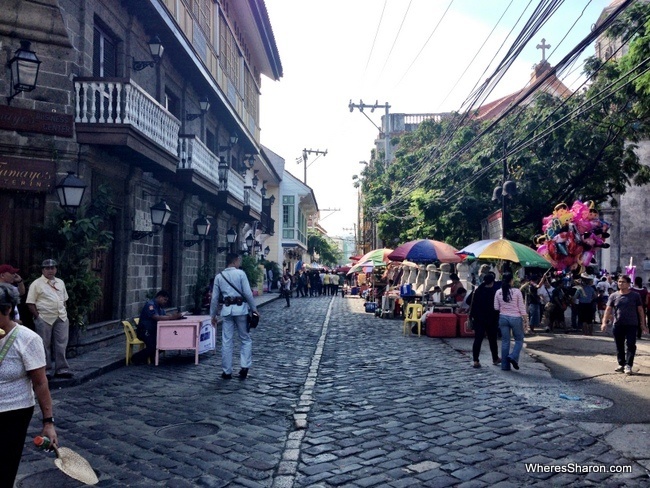 The street with the festival

Outside the church, I bought S a big Dora balloon.  While I was doing this, a whole crowd surrounded us wanting pictures of S.  It is not the only time it has happened, but the first time I have taken a picture back!  It is quite overwhelming when we get this much attention.  It can feel like we have to keep moving all the time.  Otherwise, someone wants a picture, and once one person starts, everyone else wants to join in.  People are always polite about it, but in some ways that is worse, as it makes it harder for us to ask them to leave us alone!! 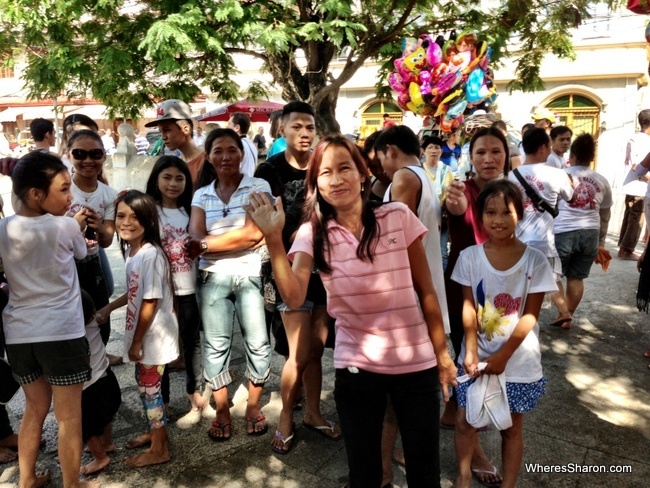 Just part of the crowd that wanted S’s picture

We also explored some of the top of the walls.  I would have loved to walk around more of this. 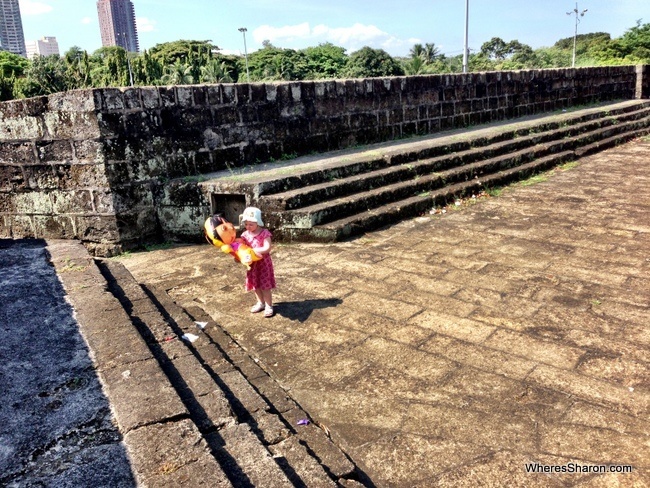 Dora and S the explorer 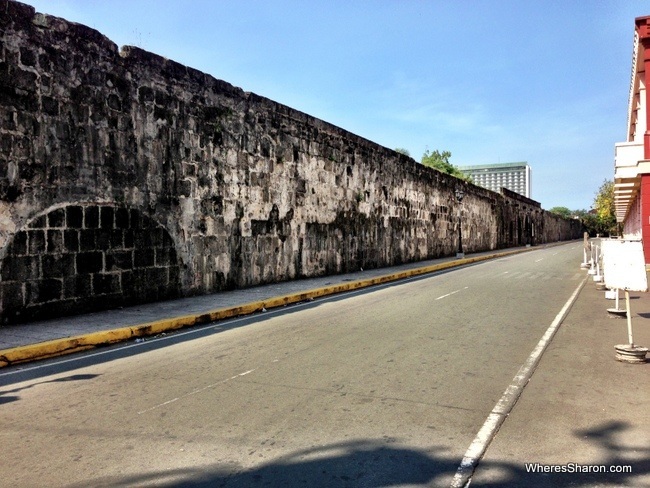 Next to Intramuros is Rizal Park, so we also checked this out.  A lovely big park which also took me temporarily out of Manila’s seediness.  There was also a festival like atmosphere here.  There was even a little train taking kids around.  For some reason, it wouldn’t stop for us though, so we nearly had a toddler meltdown.  Lucky Dora was there to save the day!! 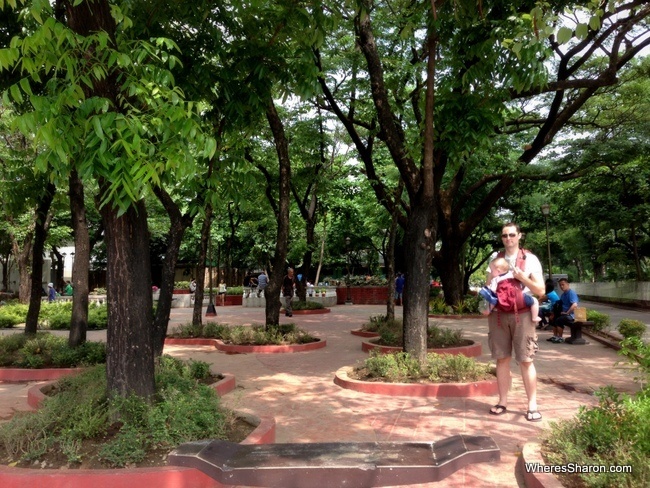 The majority of restaurants and shops were shut.  However, plenty were also open.  Mostly this was just 7/11s and fast food chains though.  The streets were pretty empty, except for people sitting around staring and making me feel uncomfortable!!  In the evening, they did fill up around the Bay of Manila area of Malate.  There were taxis, tricycles and pedicabs everywhere.  Intramuros is definitely recommended for  a Good Friday activity. 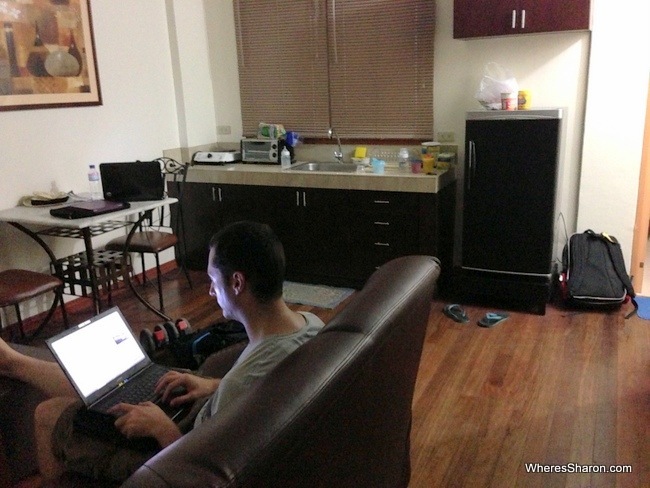 We stayed at 1775 Adriatico Suites which is basically an apartment building.  I have mixed feelings about our stay here.

One the one hand, it was excellent value.  Both of the apartments we stayed in were great.  It is in a very central location in Malate.

However, there were two dramas during our stay here.  Firstly, the airport pick up we arranged through them did not pick us up as promised.  We eventually got a metered taxi and then were told we still had to pay for the hotel one.  They gave a whole different story about how we had to ring for the pick up which was not what they had told us in the detailed instructions via email.  There is also actually no way to ring unless you have a mobile.  I argued the point, and the lady said she would check with her boss.  We never heard another word about it.

The second drama was when we were told that we were being too loud on the floors only 15 minutes into being in our room.  Three of us were playing with laptops/ipads and Z was crawling around…. what the hell, a crawling baby is too loud?  The next day, they told us they kept getting complaints so we needed to move rooms.  They were polite and promised a bigger better room.  We didn’t want to move, but we just wanted the hassle over, so we agreed.  Then they tried to move us into a much smaller room and didn’t even offer to compensate us for the difference in price between the two rooms.  I argued and eventually it worked out.  So annoying though, and not how I want to spend my limited time in Manila.

Practical Information
About $60 a night for a deluxe apartment – Check the latest prices. 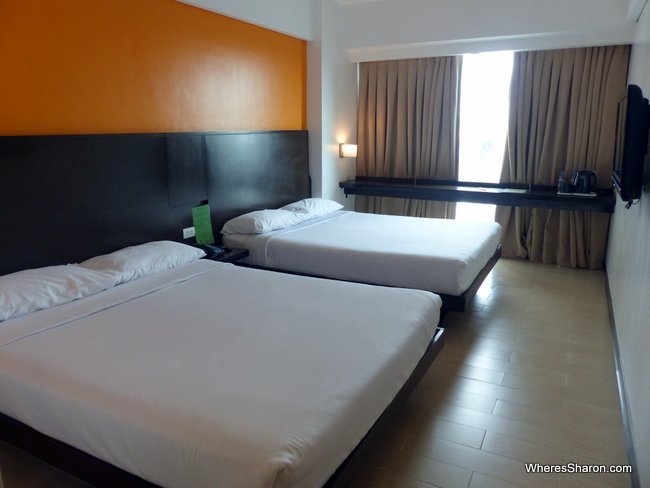 Our room at the Remington Hotel

We have since had an overnight stopover in Manila. We stayed at the Remington Hotel which is basically across the road from the main airport (NAIA).

It is very convenient as it’s not only close but located in Resorts World Manila so there are plenty of shops, restaurants and entertainment. There is also a free shuttle between the airport and the hotel.

We stayed in a standard room which is simple but more than adequate. We had two double beds, cable TV and wifi. We checked out at 2am for our flight and they had breakfast waiting for us.

Practical information
We paid about $110 for a standard room including breakfast – Check the latest prices here.

Other options for best accommodation in Manila

We have heard great things about these hotels:

We self catered in our apartment (we found a nearby supermarket open on the Thursday) or ate at a nearby Jollibee (which is like a Filipino McDonalds but it sells more than burgers).

Taxis, tricycles and pedicabs are everywhere.  There are also horse and carriages!! We had no problems getting taxis to use the meter, so we didn’t even bother with the other forms of transport.  It is very easy to get a metered taxi from the NAIA airport.  I wouldn’t bother with the much more expensive coupon cabs. 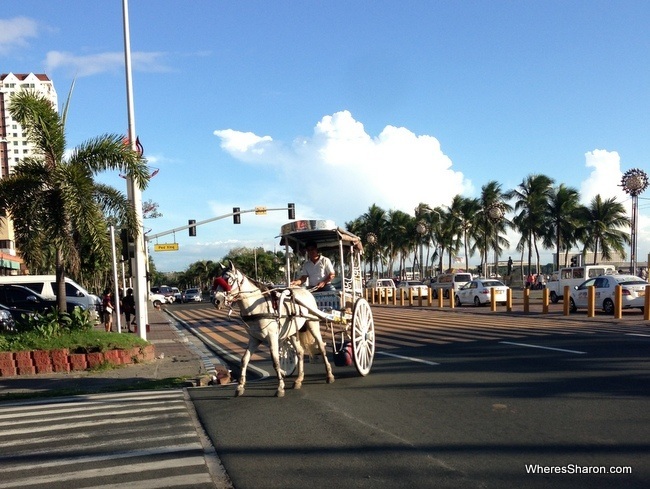 Horse and carriage anyone?

We paid for a private car transport to Clark through our accommodation, as we were unsure how else to get there, except through Philtranco buses which don’t run often and were at the wrong time for us.  It was an expensive 3800 pesos (nearly AUD$100), but there were no other options with everything tourist related shut.  It took about 1.5 hours and was a very smooth journey.

Clark airport was just as boring as it had been when we first got to the Philippines.  What was very annoying was that they had a nice upstairs part, but the only two flights that were leaving for the next few hours, were leaving at basically the same time and both stuffed at one gate, downstairs in a basement like area!! It was ridiculous.  Both flights started boarding at the same time and it was quite a mess!  It was like we could choose for ourselves whether to go to Taipei or Singapore. I really don’t know how that makes sense. 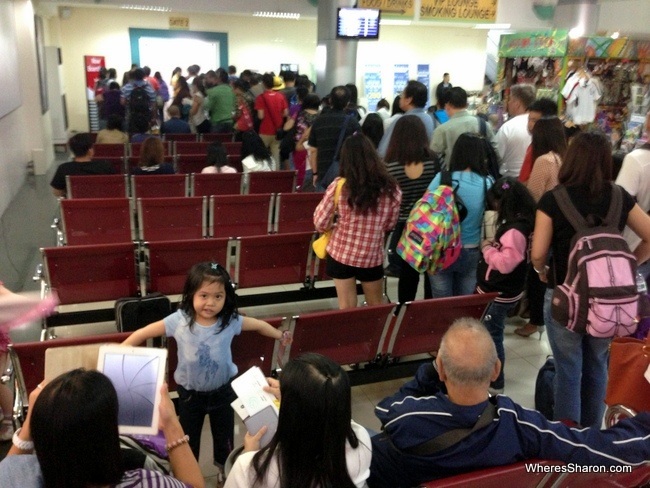 The only two flights to be leaving Clark in the next couple of hours were squished into this area and boarded at the same time!!

Definitely choose Manila NAIA airport over Clark, if you have a choice.  You can read more about travelling around the Philippines.

I can’t say I enjoyed Manila.  The streets are a bit like a garbage tip – and we were in a tourist area.  It smells of urine and garbage, and I was frustrated with our accommodation. There are way too many people hanging around on the streets for me to feel comfortable.  One even grabbed me when I was by myself. Intramuros was a nice area to walk around, but even that had some rubbish and smell.  Even with all this, I was happy to be back in a big city.  I am definitely a city slicker!  I would just prefer my big city time to be Bangkok or somewhere else!!

In conclusion, it was ok for a couple of days.  It was not horrible, like some developing country capitals I have been to in Latin America.  Just unpleasant.  I would much rather be elsewhere in the awesome Philippines than spending my time here.  However, if you are ever in Manila, it is definitely worth checking out Intramuros.

You can read more articles about our travels in the Philippines here. We visited some fabulous places like Boracay and Bohol.

What are your best tips for Manila?

Disclaimer: This article contains affiliate links. This means that if you make a purchase after clicking on one of these links that we may receive a small commission at no extra cost to you. Thank you 🙂

Cheap Things to Do in Tokyo...

Our Guide to the Best Things to Do in Moalboal 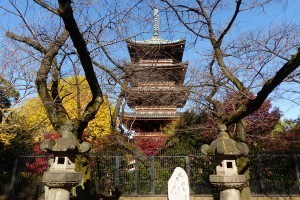 Cheap Things to Do in Tokyo...

When it comes to “brand value” and generating food and cultural trends, few countries can match Japan. It would have...
Copyright 2013 Jupiter Premium Magazine Theme
Back to top