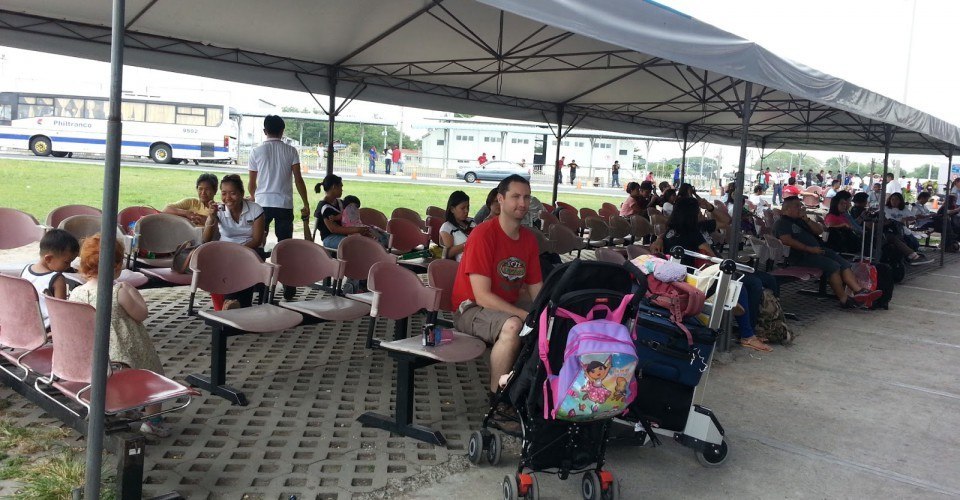 It was to be the biggest journey of our trip.

Saturday afternoon, we were flying Bangkok – KL.  Then we had 12 hours in KL, before flying out at 6:45am the next morning to Kalibo, Philippines via Clark airport (near Manila).

It wasn’t going to be fun, but we were well organised and everything was sorted… well so we thought.

Wrong hotel bookings, fully booked hotels, broken pram and suitcase and no working ATMs were all in our future…

It started off well enough when we were lucky enough to find a station wagon taxi outside our hotel as we were leaving who offered a better price than we expected to the airport.  It then went downhill when he drove like a rally driver.  Really not fun while holding onto two kids in a seat belt-less back seat. 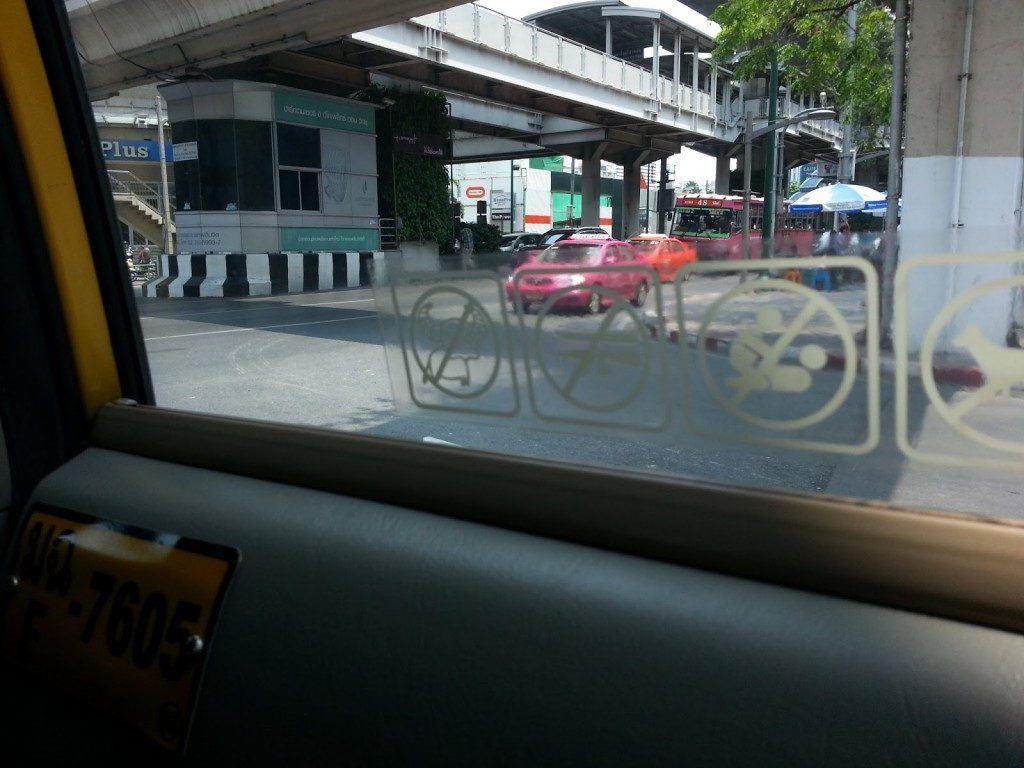 Weird sticker in the cab

We did get there in good time, checked in and waited for our flight which was full, but departed on time and all was good.

We arrived in KL ahead of schedule and were soon out looking for the tunes airport shuttle.

There is one hotel close to the LCC terminal in KL, where we were transiting.  It is a tunes hotel which is a cheap hotel, run like a budget airlines.  Everything that can be considered an extra is.  So things like a towel and a/c come at an extra cost.  Anyway, despite being budget, being the only hotel at LCCT, it was quite pricey.  We had ummed and ahhed about booking it as it was a lot of money for what amounted to a very budget hotel, especially as the rooms are only doubles and super small, so we would need two.  We ended up deciding to book it, as with only 12 hours in KL and flying out so early, we wanted as much sleep for the kids as possible.

Eventually, we caught the shuttle and arrived at the hotel.  The arrival was quite unnerving, as lots of people were standing around staring, and I didn’t feel comfortable at all. I waited at the reception for awhile, even though I was the only one there, and there were four staff behind the counter.  They obviously didn’t care at all.

Finally, I was assisted, and this is where things turned very very bad.

Even worse, they were fully booked 🙁 🙁 🙁

They were not at all helpful or even nice about it, although they did end up letting me use the internet.  Given they were doing nothing and we obviously had two very young, tired kids and had just made a stupid mistake, it would have been nice if they had actually helped.  I just wanted to cry.

Instead, I got online and looked at what was available.  We had bought a Malaysian sim card the previous week, and I planned to ring some hotels.  Of course, it said we were out of credit.  Not sure how as I haven’t used it.  It was too late to book online, so I wrote down the address of one of the only places that were available within a 20km radius (KL itself is a lot further from the airport) and we headed back to the terminal, hoping maybe there would be a hotel booking desk.  There wasn’t.

No one at the airport could help us, so we bought a coupon to get a taxi to a hotel’s address I had written down that had availability online.

We get there.  It looks mega dodgy, but whatever.  By this point, its only going to be for 7.5 hours and  we’re desperate.

It turned out they were booked out :-/

A hotel please, any hotel…

Thankfully, our taxi driver was very helpful and we went on what felt like a wild goose chase trying to find more hotels.  He didn’t have much of an idea himself where they were, and it felt like we were in the middle of nowhere.

I think we got knocked back at three before we finally found one.

It was after 9pm and we were so bloody relieved.  It was a tiny basic room, but they added a mattress to it (which didn’t fit completely but we wedged it in) and could just fit the travel cot and our bags as long as we completely blocked the door to the room!  Anyway, we were much relieved.  It had been a terrible few hours. 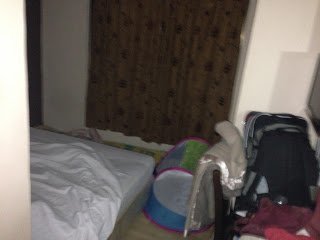 We got the kids straight to bed.  We had been lucky in that they were absolutely fantastic through all the drama.  It was a late night for them, especially after no nap for S and only a short one for Z.

It was a pretty restless night for me.  Z called out regularly, and I was stressed that we wouldn’t wake up (we needed to be up just after 4am).  I was also very annoyed with myself.

We were also annoyed to find that the one handle on our new suitcase was broken.

An early start back to the airport

The early morning wake up went fine, thankfully.  Although S was pretty bloody annoyed about getting woken up and did her best to wake up everyone else in the hotel in protest.  Our taxi driver from the night before was there right at the agreed time (he had offered to pick us up for an inflated price).   We arrived at the airport in plenty of time, but it was full of people and the lines were so slow that we barely checked in on time.  We were stressed at this point as it had taken us ages to get through immigration and security when we had flown from this airport to Bangkok, and we didn’t have enough time for that this time. 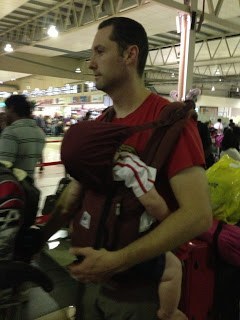 It all worked out ok though, except when I was getting the pram off the escalator…

A wheel got stuck in the side and when i wedged it out, it stopped the escalator and whatever the pram version of a hubcap is, went flying off the wheel :-/

The wheel is also bent out of shape.  Thankfully, it all works fine, but it added to my very over tired, world is against me mood.

We had another long walk to the plane.  LCCT is really quite ridiculous.  It’s more like being at a massive bus terminal.  We thankfully only had a ten minute walk on the tarmac to the plane this time
(compared to 20 minutes the night before).  Soon enough we were onboard our nearly full flight and jetting off to the Philippines!

Air Asia only flies in and out of the tiny Clark airport, two hours outside of Manila, and this is where we landed.

The flight was about 4 hours and quite boring.  Boring is good with two little ones though.  All of us managed some sleep, except S who was entertained by the ipad the whole trip (geeze the ipad is awesome!!).

I was surprised by how tiny the airport is.  I thought it used to be a major international airport, but unless they teared a whole heap of it down, I doubt it.

After a long line up to get through immigration, we had our next drama.

None of the ATMs worked.

Fabulous.  New country, new currency and we couldn’t get any.

We begged the officials stopping people from going back into the arrivals area to let us back in, so we could visit the currency exchange places on arrival.  Thankfully, we were able to exchange some emergency ringitt this way.

We had lunch and waited outside in the seating area for check in to open for our next flight. 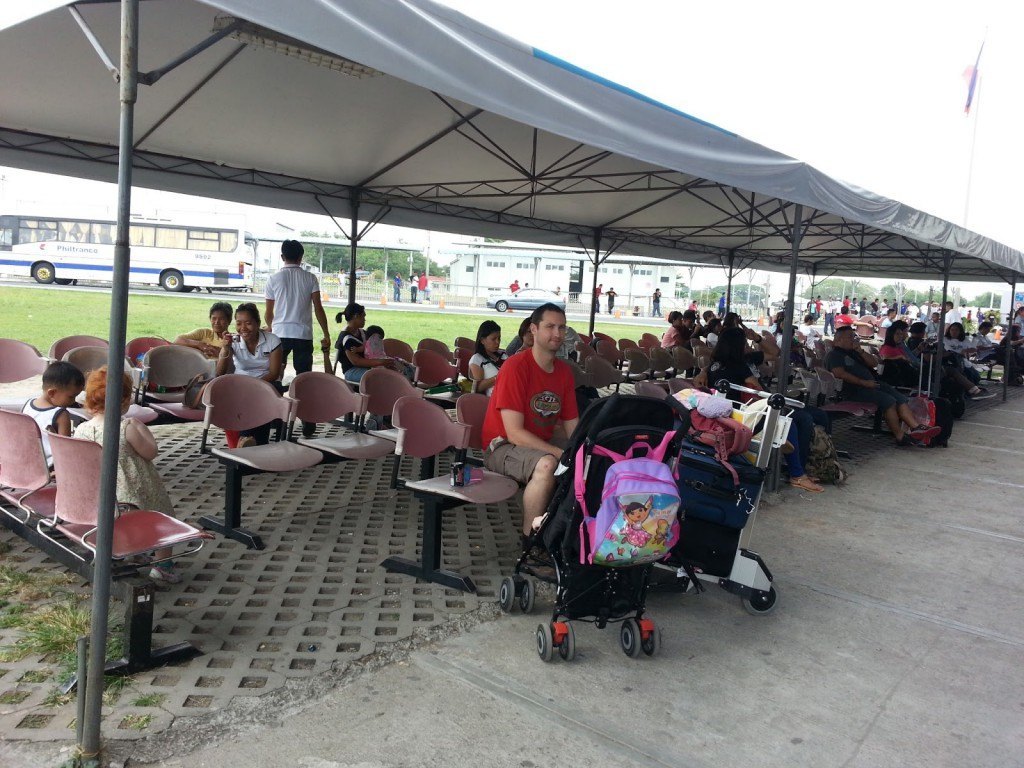 We had four hours between flights, and this really wasn’t a great airport for a transit.  It wasn’t bad either though.  Everyone was so easy going, that we hoped this was an indication for how the Filipinos would be as a whole during our trip.

After eating lunch, I went searching for a diet coke, and was so so happy when I found a pepsi max.  I’m addicted to pepsi max.  I was missing it after not being able to find it in Malaysia and Thailand.  Suddenly, I was so happy and excited to be in Philippines, and I felt that it was a sign that everything would be ok now and our luck would turn 🙂 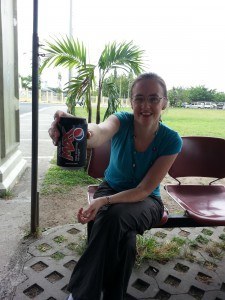 Everything was going to be all right 🙂

It seemed it did.  Except for when we realised there was a departure tax and we had to go all the way back around and try to get into international arrivals again to exchange more money!!

I talked for awhile with some friendly locals, although it got a bit annoying when they got very full on with wanting photos of S.  People wanting photos of the kids is very normal so far on this trip, but when people want S to pose or want her on their lap or something, it gets frustrating.

Our flight to Kalibo went smoothly.  There was hardly anyone on the plane, so we had two rows to ourselves and even arrived early!  The flight in had great views of that part of the island of Panay (where we were going).  From the air, it looked so lush and green and quite awesome!

Practical Information
Bangkok – KL was about $417 for four of us (Z on lap), luggage, meals, seats, etc on Air Asia
KL – Clark was $266 for the four of us (Z on lap) and luggage, extra charges, etc on Air Asia
Clark – Kalibo about an hour and $90 for the four of us, luggage etc on SE Air (Tiger). There was a domestic departure tax of 150 pesos per person (for everyone, including kids and babies) payable only at the airport after checking in.
Bangkok airport taxi was 400 baht

We ended up staying at Sai Holiday Hotel in Dengkil from RM65 + RM10 for extra mattress. Fine for a stopover.  Coupon taxi was RM68 to Dengkil, plus we paid RM20 extra to driver to thank him for driving us around.  He picked us up again the next morning for the steep price of RM80.  It took about 25 minutes to get to the LCCT.
The tunes hotel was about $60 per room (we got two so i wasted about $120 🙁 )

We actually got a great rate on Aussie dollars at the exchange place at the airport.  The rate on our credit card is only slighty better and given the fees we are getting hit with at ATMS (plus the problems with finding ones that will work for us), taking cash from home is definitely a good alternative.

Thailand wrap up and how things are going overall

365 days of Christmas at the Sampaguita Gardens Resort 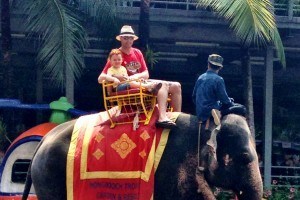 Thailand wrap up and how things are going overall

Thailand was, of course, awesome. We loved our time here, and it was great to get back to Bangkok, as well as visit some...
Copyright 2013 Jupiter Premium Magazine Theme
Back to top