Flying long haul with a baby and a toddler – how painful is it?

One of the things I feared most about this trip was the long haul flights.  Would the kids stay up all night?  Would they scream?  Would we have to sit next to an unforgiving stranger? Would I be able to go to the toilet?! 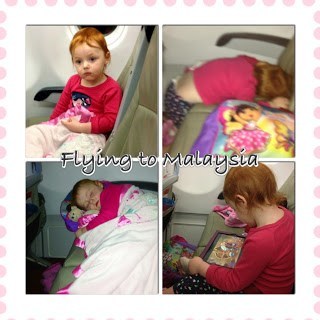 I love S’s sleeping style in the second pic

We flew from Melbourne to Kuala Lumpur, a flight of about 8 hours, at 1:25am.   I was hoping that flying at this time would make things smoother than when we went overseas with S and flew during the day (it was bloody horrible!!).  I know that when I caught flights pre-kids that I had been pleasantly surprised by how kids seemed to all sleep on late flights, and I was hoping it would be the same for ours!

The kids were perfectly behaved after we got them up at about 11:15pm to leave home.  Navigating the airport was absolutely awesome. There was hardly anyone around at that time, and we barely waited at all for anything.  We got there 1.5 hours before the flight and this was about perfect to do everything and have a short play at the kids play area which was thankfully right next to the gate.

Air Asia was awesome in that they actually came and told us that we could go to a special priority boarding “lounge” (really just a sectioned off area at the gate) as we had young children. This was great.  We got to board without dealing with lots of other people.  Usually, I try to board last, but given the time of night and how tired we all were, there seemed no reason to wait.

The plane wasn’t full, and we got our wish of having two rows of three by the window to ourselves.  We took a kid each and settled in. My biggest complaint about the flight is that they kept the full cabin lights on for soooo long!!!  Bloody hell, it was 1am, we didnt need them on for two hours, and then they turned them back on again 3.5 hours later.  S couldn’t sleep at all with the lights on and Z was hard work.  It was also too cold for me to sleep. 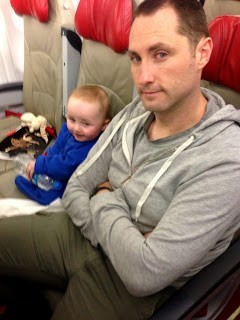 Despite not sleeping much, S was an angel.  She was so excited and happy to be going on holidays, that it was kind of fun!

So yeah, it was fine and I worried for nothing.  In fact, the time went so quick that in some ways it was the least painful flight I have ever taken! We even arrived 20 minutes ahead of schedule.

It was still dark when we arrived and only 6:20am.  Everything went very smoothly.

Everything was going so well, that we decided not to get a cab to our hotel, but caught a bus the hour into the center of Kuala Lumpur. It was also hassle free, and I actually really loved it.  It is a massive relief to see that it is not only possible for us to travel round with the kids, but actually not that big a deal.

At arrival at KL Sentral (main train station), we caught a cab to our hotel.  Things went downhill momentarily here when S collapsed into an exhausted tantrum as I wouldn’t put her in the pram (as we were just going between a bus and a taxi 100m away).  It was all ok though.

So yeah, it was surprisingly no dramas.  I would definitely choose this flight time again.  That’s not to say it was easy, but I have had a far harder time taking them both to the supermarket by myself than what I did on this journey!!  In fact all up, I’m surprised and shocked to say it, but today has been one of the best days of my life.   Travel is my passion, and I am enjoying sharing it with my kids so much, especially S who suddenly seems so grown up and is loving it 🙂

Practical Information
Air Asia Melbourne – KL cost about $700 for all of us, including seat for both kids and 2 bags.  Bargain!!!  Bus to KL Sentral, RM8 for adults and RM4 for kids.  I imagine both our kids would have been free, but I bought S a ticket as I don’t need a nearly 20kg kid on my lap!!  Coupon taxi to Berjaya Times Square Hotel cost RM25, but I think they ripped us off.  They were so helpful with the dramas we were having when S basically totally collapsed on the ground and wouldn’t move, that I wasn’t going to argue.
Current exchange rate: AUD$1 = RM3.15