Haiti side trip: Things to do in Cap-Haitien 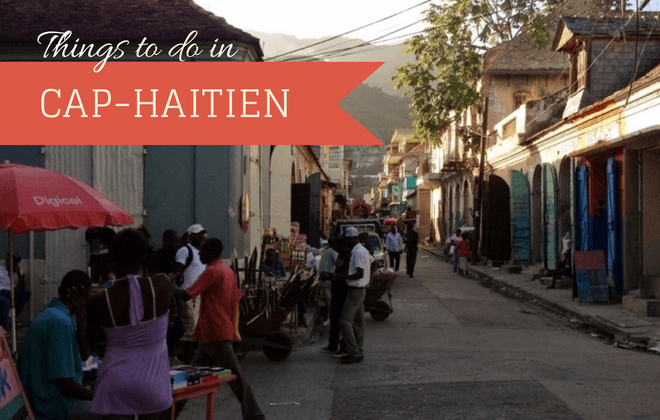 Cap-Haitien is Haiti’s second largest city and the capital of Northern Haiti.  It has some great attractions for tourists and is easy to reach from the Dominican Republic.  It is a world away from Port au Prince.

After visiting the major attractions of the Citadel and Sans Souci Palace, I set out to find out what to do in Cap-Haitien.  I tried to do two jobs first – buy stamps for a postcard and find an internet cafe to let Sharon know that I was ok.  An internet cafe was nowhere to be found, and the post offices was unsuccessful as well.  I found it, but the stamps were large and I couldn’t fit enough on a postcard to send it to Australia!

Cap-Haitien is a pleasant place.  A few narrow streets were blocked off with burning refuse, but otherwise the streets were busy. Most buildings in the centre seemed to be two or more stories in a lot of different styles. There were some abandoned and collapsed buildings, but they were few and Cap-Haitien looks to have escaped any trouble from the recent big earthquake.

The most striking thing about walking around was the people, especially the school kids. Many had bright uniforms which contrasted sharply with their skin. And girls had hair full of matching ribbons and bands which looked stunning. Everywhere there was a lot of activity and people going about their business.

Things to do in Cap-Haitien

This is the top thing to do in this area and you can read all about it in my article here.

One of the more interesting things I found while walking around was the Iron Market, the Marche au Fer. It is named after the market in Port-au-Prince which is under an iron pavilion. The Cap-Haitien version is also in an iron pavilion, but I first had to wade through blocks of people selling all manner of stuff in the road leading up there. There was only a narrow path unobstructed by stalls and sellers and lots of people were trying to get through. 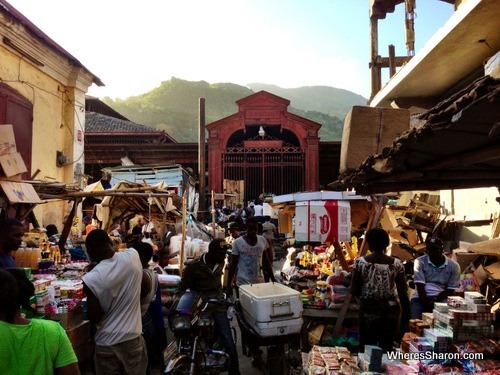 The busy streets around the Marche du Fer.

It was warm outside and packed with people and produce. The pavilion was incredibly humid. While outside there tended to be fruits, vegetables and other dry goods for sale, inside had a lot more meat and seafood, as well as everything else you could think of buying. It was even more packed than outside, with sellers everywhere. It was quite dark, with shafts of light coming through the roof and it was quite photogenic, but the smell – especially from the meat – was so strong I couldn’t stay for long.

Out on the other side it was somehow even more crowded. It seemed I had struck the start of rush hour as people were busy buying for the weekend. I kept passing different things for sale, all manner of food, stereos, batteries and bike parts. 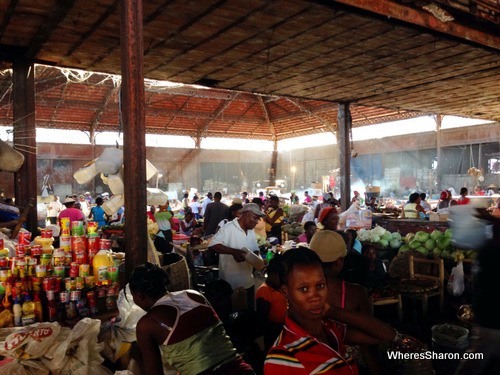 Inside the busy Marche du Fer

After leaving the market I continued to wander around town. I passed the Hotel Roi Christophe. The city’s oldest building has been a hotel for a very long time. So long, in fact, that Henry Christopher actually worked there, starting in a waiter, well before becoming a revolutionary leader and finally King. The hotel was later named in his honour.

Heading south I came across the Place d’Armes in front of the Cathedral, between rues 18 and 20. In addition to the large Cathedral the plaza is dominated by monuments to two other key revolutionary leaders: Toussaint Louverture and Jean-Jacques Dessalines. Toussaint was the leader in the initial slave revolt that ousted the French, but never declared independence, instead seeking a settlement with the French. When they French re-invaded and re-imposed slavery it was Dessalines who led the Haitians to independence and freedom.  He expelled the French for good in 1804, declaring independence and declaring himself Emperor at the same time.

These days the Place d’Armes seems to be Cap-Haitien’s natural meeting place. With the day winding down there were lots of people gathering round the square, or just hanging out enjoying some shade. It seemed like a nice place to end my exploration of Cap-Haitien and Haiti. 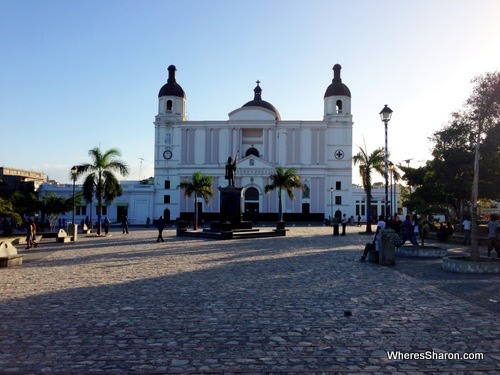 Looking across the Plaza d’Armes at the Cathederal.

Even though I spent just a short time in Haiti it was an interesting experience. It was certainly a big contrast to the Dominican Republic. Despite all the warnings I read online about Haiti, I found no cause for alarm in Cap-Haitien. Things were orderly and I never felt unsafe or suspected much crime. Damage from the earthquake seemed non-existent making the north and Cap-Haitien a good place to experience Haiti without worrying about the worst case scenario painted in many travel advisories. So while the normal precautions would still be needed, the parts of Haiti I saw were no more dangerous than elsewhere on Hispaniola.

The people of Haiti, at least those that I encountered, were generally helpful if reserved. There’s far less English spoken than in the Dominican Republic, and my basic French could only help so much, but when approached people did their best to help me, and some went considerably out of their way. My guide at the Citadel aside, none did it for anything in return. And money changers aside, I never felt overcharged or felt like I was asked to pay more than anyone else.

If I had any advice it would be to change money on the border, rather than in Cap-Haitien (unless you use a bank) and consider paying for things in US dollars when it is an option, as it worked out cheaper than the conversion into goudes.

You can also read my first impressions of Haiti.

Do you have any questions about visiting Haiti?

A visit to London’s theatreland 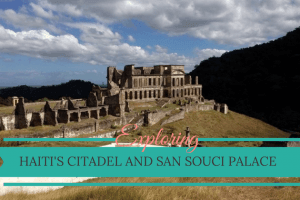 There are two big attractions in this part of the world - the UNESCO listed Citadel and Sans Souci Palace.  I was determined...
Copyright 2013 Jupiter Premium Magazine Theme
Back to top