The Port Arthur Historic Site is one of the early settlements in Australia.  It was established in 1830 as a penal station to get timber using convict labour.  In 1833, it became punishment station for the worst convicts.  Repeat offenders were sent here from all over Australia.  If you want to explore Australia’s convict past, I don’t know of a place better to do this than the Port Arthur Historic Site. 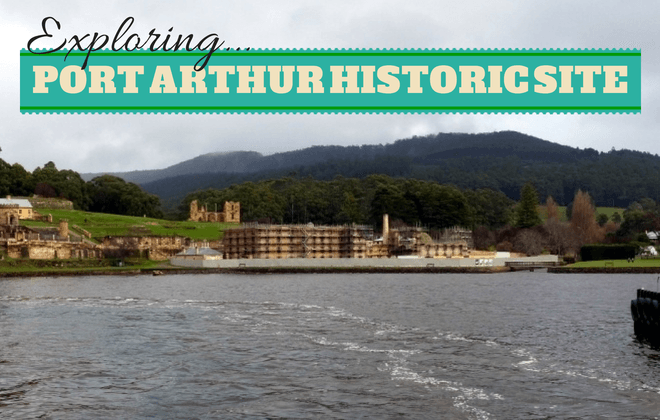 The Port Arthur prison system included many buildings which can be visited today, such as the silent prison and the British Empire’s first juvenile prison at Point Puer.  In addition to the old prisons, asylum and other buidlings directly associated with the convicts, you can also get a taste of how the military and free men and families lived in Port Arthur by visiting old homes and gardens.  It is a very extensive site.

I visited the Port Arthur Historic Site many times growing up, but I had not been in a long time, so I was excited to visit again and share it with J and the kids.

Things to do at Port Arthur Historic Site

Any visit to the Port Arthur Historic Site should start at the Interactive Centre.  When purchasing or collecting your tickets, you are given a card.  In the Interactive Centre, this card tells you which (real) convict you are and then you basically follow a path to see what your fate would have been at Port Arthur.  It is an interesting way to present the information, and I was happy to find that I was a convict that managed to escape!

The Interactive Centre is a good way to introduce yourself to the broader history of Port Arthur and put the rest of your visit into context.  We actually visited the Interactive Centre last as we rushed for the next walking tour.  With hindsight this was a mistake, and I suggest you start here even if it means taking the next tour. 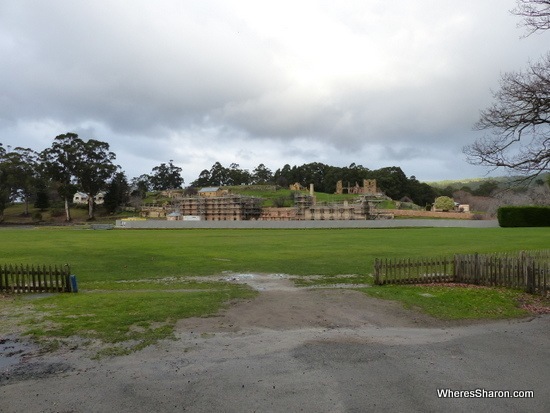 Included in site admission is a 40 minute walking tour. It is a great introduction to the site before exploring more in depth.  We did find this tricky with the kids, and I missed most of the tour while I kept them entertained.  I should have taken more food to keep them busy, so I could have listened too.

This is also included in the site admission.

It was hard to see much thanks to the bad weather while we were there, but the commentary still made this worthwhile. It was better than the tour for us in many ways as the guide talked over a PA system, so the kids could chat without disturbing other people or us.  The guide talked about why Port Arthur was established there and why it made a good port as well as some good (and not so good) escape stories.  We also learned about Point Puer – a small island just off the coast of Port Arthur where the first boys’ prison was established in the British Commonwealth. 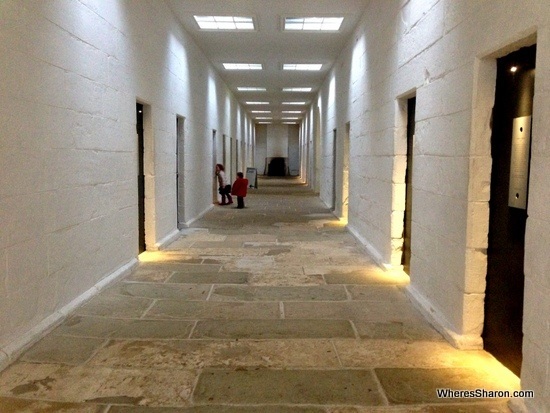 S and Z check out the cells in the silent prison

The site is reasonably large and quite extensive. There are over 30 buildings to explore.  Some are in ruins and some are well restored.  There are old prisons, guards quarters, houses and an asylum.  I particularly enjoyed the silent prison, since it is still standing and well restored.  I find this the easiest part to walk through and have some (very minor) understanding of what it must have been like for inmates here.  You can see and explore many cells as well as the terrible solitary confinement cells.  You can even see how they managed to go to church without viewing each other.

There were free tours at some of the buildings, and everything was well sign posted, so it was easy to learn a fair bit by yourself.  Additionally, you can also do more extensive tours.

We did not do this, but it is also possible to visit Point Puer and the site of the boys’ prison on a tour by boat from the Historic Site. 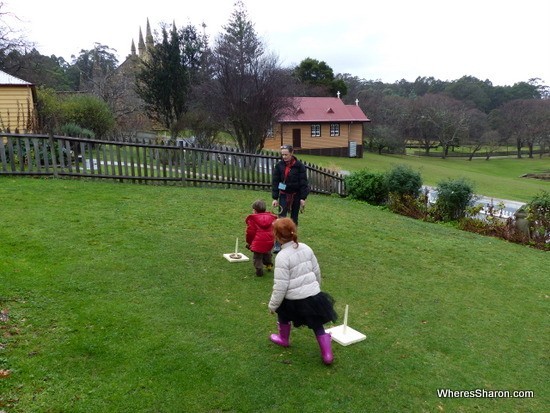 A game of quoits

Thanks to the school holidays, there were a range of activities on offer.  If we had been able to stay longer, the kids could have made convict bricks amongst other things.  There were also some old style games out and we had fun playing quoits.  It was a great way to break up the visit for the kids.

It is impossible for me to think about Port Arthur without feeling the dread and terror that I felt back in 1996 when 35 people were murdered and another 19 injured at the Port Arthur Historic Site and surrounds. I couldn’t believe something like this had happened an hour and a half from my home in the quiet state of Tasmania.  I was in my final year of school and I have never seen an event that is not directly related to people hit them so hard.  I guess this is not surprising, Tasmania is a small place.  I did not know anyone that died, but I knew a lot of people that knew someone.  There are not many degrees of separation.

It is not talked about at the site – if it hit me hard 95 kilometres away in Hobart, then I am certain it hit this tiny community very hard.  There is a memorial garden at the site of the old Broad Arrow cafe which was destroyed after the shooting spree.  I paid my respects.

My biggest recommendation is to definitely visit for a whole day or give yourself time over two days to visit the site (the entry pass allows this).  We only went for half a day which was a mistake.  It felt like we ripped ourselves off as we had to rush around everywhere.  I also definitely recommend starting with the Interactive Centre. 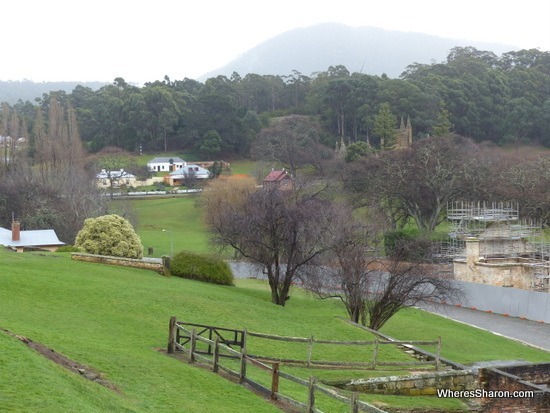 We visited on a cold and wet day.  It no doubt would have been more enjoyable if we had had clear skies.  However, it was still worthwhile to visit in this weather, so I wouldn’t let it deter you.

We took our stroller and had no problems pushing this around the site, although we would usually leave it outside the buildings.  It is such a big site, that we definitely found it worthwhile.

Check out current prices on the Port Arthur Historic Site website.  We had the basic bronze pass.  Our kids were free. 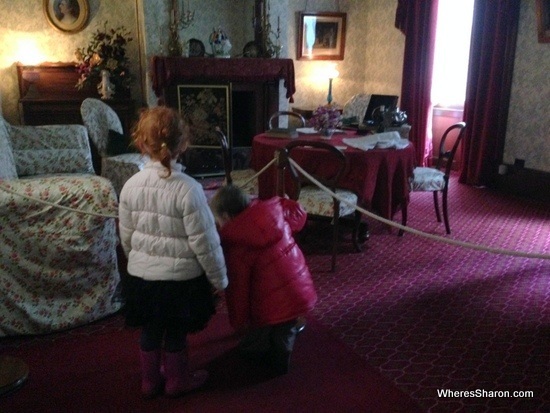 Checking out the Commandant’s House – a second before Z ducked under the rope and ran to the couch!

The kids were bored by the walking tour, but they were happy to run around the site despite the weather.  They particularly liked checking out the houses, especially if they were furnished as family homes. S loved to talk about how the kids lived.

This is a fabulous, well presented site chock full of information.  I love how the basic entry ticket includes the boat ride and introductory tour as usually I would be too cheap to buy these types of things and they do add to the experience. 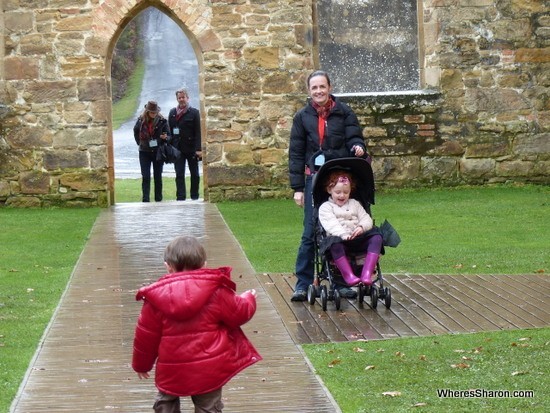 Checking out the church

It is an interesting site, but also one that I have always felt has a bad, heavy air.  A lot of suffering occurred here and I think you can feel it.  However, that is all part of the experience.  Port Arthur Historic Site does an excellent job of showing some of the beginnings of Australia, both the good and the bad parts, and it should be a must visit on any trip to Tasmania.

Check out more things to do on the Tasman Peninsula while you are checking out Port Arthur.

Need more inspiration? Check out my guide to the top 25 things to see in Tasmania – the ultimate bucket list! This attraction made the list.

We were guests of Port Arthur Historic Site but, as always, my views are all my own.

Have you explored Australia’s convict past?