Things to do in Melbourne: Events and Festivals

As I write this post, there are helicopters flying overhead, the excited hum of people and a warm sun beating down through my bedroom window.  Even sitting up in my bed, I feel like things are happening and I am part of something.  This is one of the main things I love about Melbourne – There is always something going on! 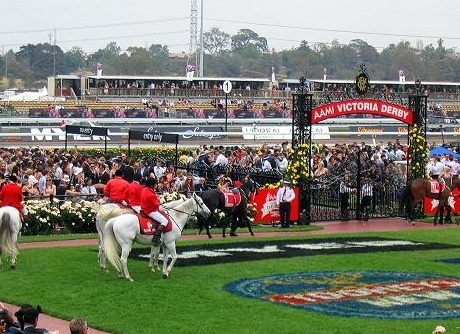 This blog post is all about one of the best things to do in Melbourne – attend an event or festival.

There is a ridiculous number of events and festivals in Melbourne, so you can probably find something on at whatever time of year that you come here.  Alternatively, you might want to plan your trip so that you can hit something that particularly interests you.  It is also worth keeping in mind that during the biggest events, such as the Australian Open and Grand Prix, you can expect accommodation to be much harder to find and more expensive.

At the moment, it is spring racing carnival time.  The helicopters I am hearing are shuffling people to the track and providing TV footage of one of the biggest racing days of the year.  Even if you have no interest in horse racing (like me), the Spring Racing Carnival is lots of fun.  Its all about hats and champagne, rather than betting and horses, although of course having a little bet can be fun too.  We are lucky enough to live opposite the race course which is why I get to feel like part of this day, even though I am not going this year.

Below is just a snapshot of some of the annual events that are on offer.  You can find more events on the Visit Melbourne website (and many others).  Occasionally you can get really lucky, and there can be an even bigger event on.  I was lucky enough to attend the Melbourne Commonwealth Games which was just amazing.

One of the four tennis grand slams is held at Melbourne Park every January in the lead up to Australia Day.  It’s a fun time in Melbourne with the Fed Square/Yarra River area having a more party like atmosphere than normal. 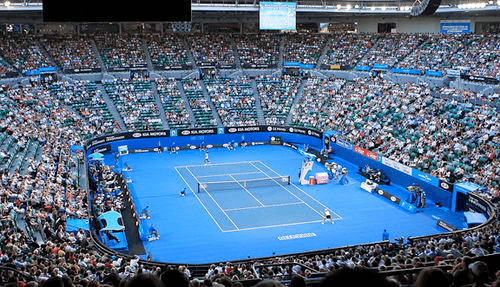 One of the top gay and lesbian art and culture celebrations in the world, the Midsumma Festival takes place in various locations around Melbourne.`Its major event is a carnival by the Yarra River.

Many suburbs have their own street festivals, but St Kilda’s is the largest and arguably the best.  Half a million people can make their way to this bayside suburb for the free music and activities on this day.  It is huge and lots of fun.

This fabulous 7pm-7am festival is a must attend in Melbourne. The city comes alive with hundreds of thousands of people with art, music, film, fashion and other events sprinkled around the CBD. Read our review of White Night Melbourne.

Victoria’s fabulous food and wine is showcased at this festival with over 250 events around the city.  Our favourite events are the food and wine ones outdoor along the Yarra River.  If you are in Melbourne at this time, you really should check out their schedule of events and try to attend something.

Held over the labour day weekend, Moomba is one of Australia’s largest free community events.  It is held around the Yarra River and there is a parade, carnival, fireworks and many water events.  This is a great one to attend with the kids – with many kid activities, a very awesome parade, kids’ rides and we all enjoyed watching the Birdman Rally – where adults wear stupid costumes and try to “fly” off a platform!! 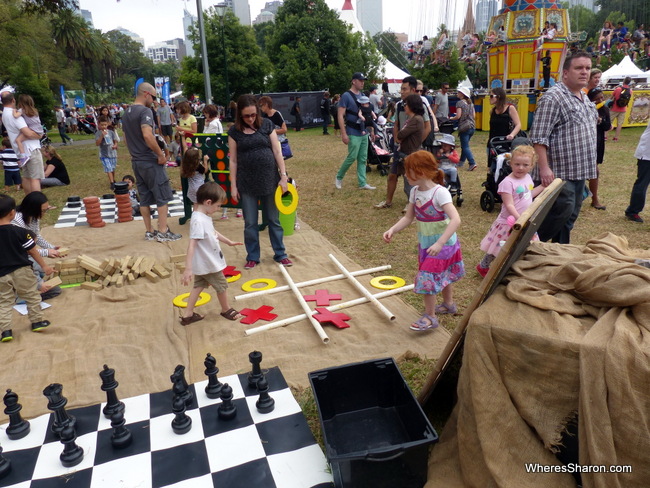 Playing some games at Moomba

One of the biggest events on Melbourne’s calendar is the Australian Grand Prix.  It is held at Albert Park Lake, although it can be heard in many parts of the city.

The largest fashion event in Australia, the Melbourne Fashion Festival is intended to excite people about fashion and showcase the latest trends.  There are many events over the week that this festival runs, and even if you don’t enjoy fashion, they can be lots of fun. 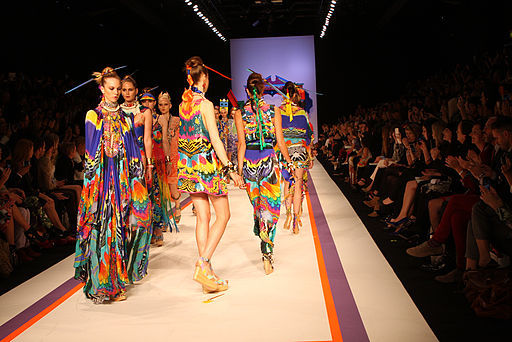 Melbourne is home to the third largest comedy festival in the world. It runs for nearly a month with a zillion comedy acts around the city.  It caters to all budgets, and it is easy to get tickets for most events.  If you are in Melbourne at this time and have a sense of humour, you should go to a show.

Buddha’s Day celebrates the birthday of Sakyamuni Buddha, the founder of Buddhism.  It is a colourful festival with Buddhist ceremonies, many art and craft activities for the kids, offerings and an Asian vegetarian food fair.  It is a different and very worthwhile celebration at the heart of the city. 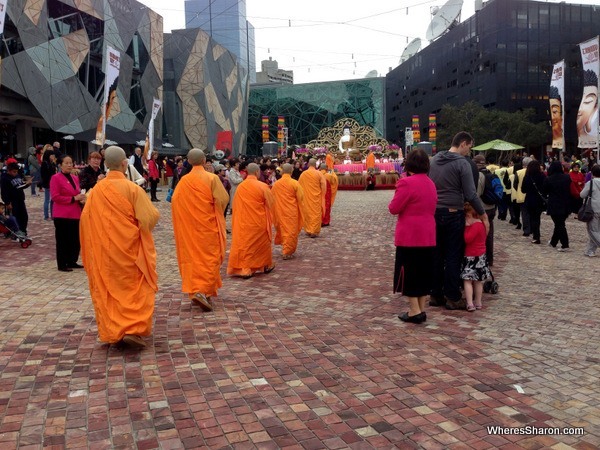 The largest film festival in the Southern Hemisphere is held for three weeks during winter.  Many films from around the world are shown around the city.

The Australian Football League Grand Final is always held in Melbourne on the last weekend in September.  There is a fabulous atmosphere in the city in the lead up to the Grand Final and on the day.  On the Friday beforehand, the Grand Final Parade is held in the CBD.  You can watch the match on the big screen at Federation Square or in just about any pub in the city. 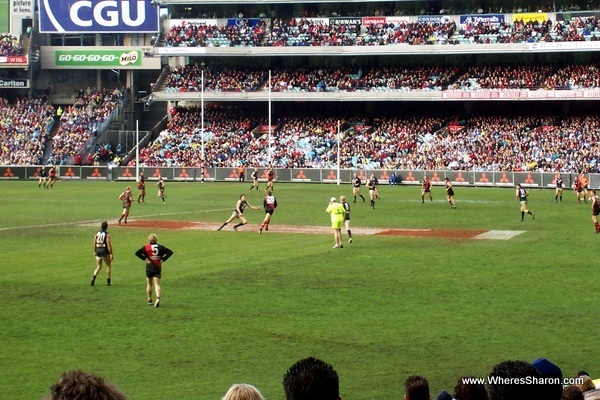 The Show is held in the September school holidays and is an excellent event for children.  There are amusement park rides, show bags, animals, shows, many events, handicrafts and food and wine attractions. Every evening, there are fireworks. It is lots of fun but can get quite pricey.

During children’s week, there are free activities all over the city aimed at children 0-8.  They are usually run by local councils, so council websites can be a good source of information for this.  We have been to several of these, and they are fantastic.  Our favourites are the Hobson’s Bay children’s week picnic and the event held at the Melbourne Museum. 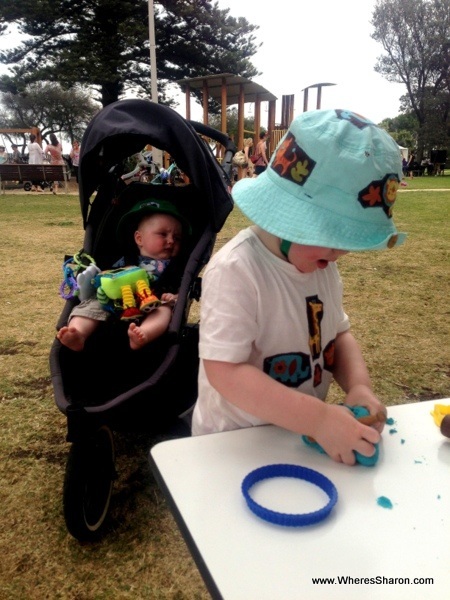 The Spring (horse) Racing Carnival runs over two months with the main events being held in late October/early November.  The main event is the Melbourne Cup on the first Tuesday in November.  It is known as the “race that stops a nation”, it is also a public holiday in Melbourne.  It is lots of fun to dress up and go to an event.  People do get quite dressed up with hats common.  It is also fun to watch all the people begin the day dressed up and looking great compared to the end of the day when they are messy, dirty and drunk  😉

Cricket is always quite popular in Melbourne, but the boxing day test at the MCG is an institution.  For a taste of Aussie culture, this is a good one to attend.

Melbourne’s main event is centered on the CBD and is very popular.  There is live entertainment and fireworks around 9:30pm as well as at midnight, so this is a good one if you have kids you want to get back to bed before midnight.  The events are spread throughout the city, so it’s worth checking the latest event schedule to find the best place for you.

There are many, more events and festivals around Melbourne.

What is your favourite event or festival in Melbourne?