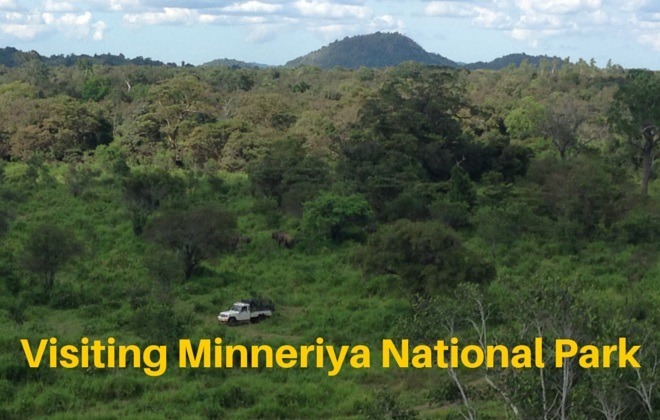 When I first started researching Sri Lanka and what there was to see there, I was surprised to find out that going on a safari is a common activity. There are many national parks with great wildlife on offer and many have safari options. I had always thought I’d have to go to Africa to go on safari.

None of us had ever gone on safari, and we were excited by the idea. I researched many parks and decided Minneriya and Kaudella were the best options as they are very accessible from Polonnaruwa which was a place I already wanted to go. They are also renowned for their elephant populations. Since elephants are bigger, I figured this would work far better with the kids rather than squinting to catch sight of smaller creatures.

Minneriya and Kaudella are neighbouring parks. The guides work out which one to take you to based on where the elephants are currently located. We explored Minneriya, although we also drove through Kaudella. 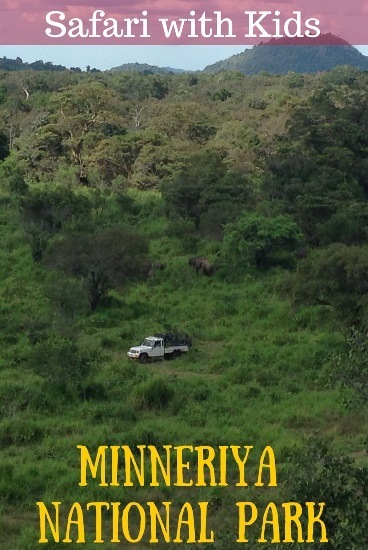 We booked our tour through our accommodation, Manel Guest House. It was easy to organise and we booked in for the following day. The tours run at 1:30pm for 5 hours as apparently the afternoon is the best time to see elephants.

We were picked up early by our driver and jeep which consisted of an open air back with a bench down each side. There was a cover over the top which the driver kept on for the ride out there. It took about 45 minutes each way to get to the parks.

On arrival, the driver bought our tickets and we drove in. I was shocked by how many jeeps we were surrounded by. There seemed to be a never ending stream. We saw far more tourists in this park than we have the rest of the time we have been in Sri Lanka in total. 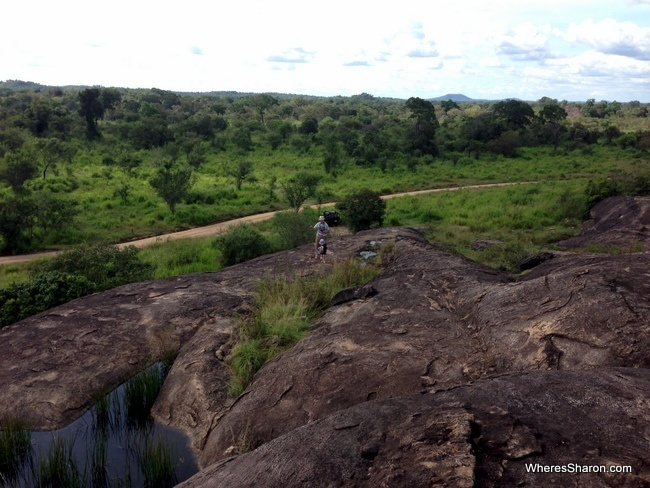 J and Z climbing up the rocks

We started by stopping at a hill of rocks. The driver told us it was too early to see elephants and we could have good views at the top. In hindsight, I think he was just acting as a lookout for other drivers.

Not to matter, the climb was fun and it was great to see the kids get into it. The view was fabulous and we discovered a herd of about 7 elephants on the other side which was just awesome. It was great to sit there watching them although they were soon surrounded by jeeps as our driver directed them to the spot from the hill top. 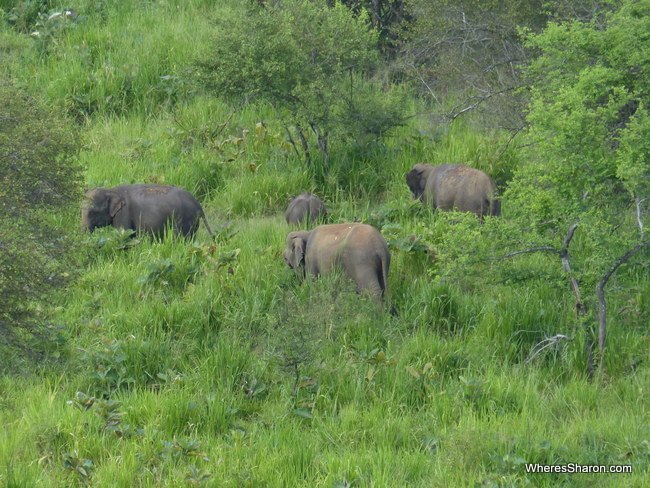 The elephants from the hilltop

We soon joined them. This was the main group of elephants we saw in Minneriya park which was a shame. It was hard to enjoy this part of the safari as we were surrounded by a crazy amount of other jeeps and foreigners. It was hard to feel like we were actually seeing the elephants in the wild with a zillion other people around us, many of which looked like they had come straight from a pool and hadn’t even bothered putting proper clothes on. 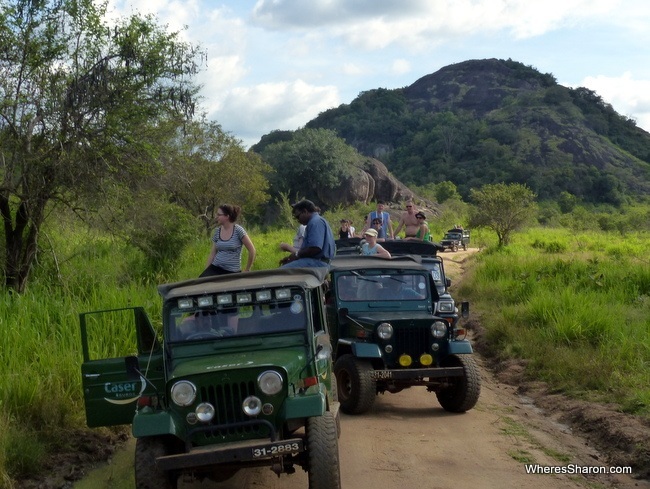 The best part came later when we came across a solo elephant and just had to share him with one other jeep. That was just magical. This time I did feel like we were experiencing him in the wild. 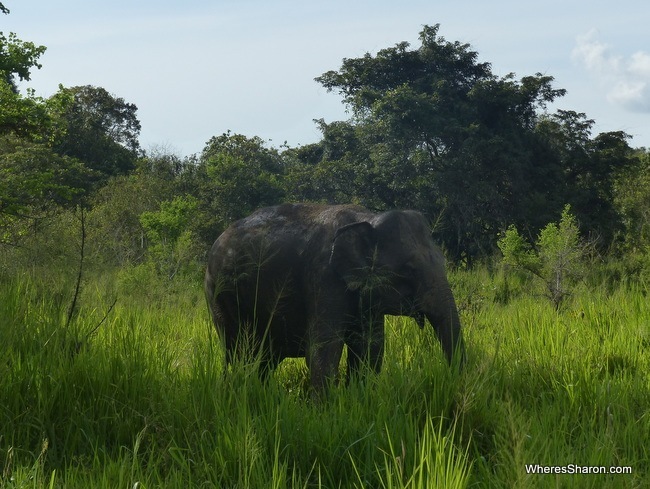 Our magical elephant – no zoom used on the camera for this shot.

We also saw eagles, a peacock and monkeys.

The drive around Minneriya was rough going. It was comfortable enough in the jeep but we were bouncing around a lot. The kids thought it was awesome and said we were on a roller coaster.

We then drove through some of Kaudella National Park which was quite pretty but we did not see much. 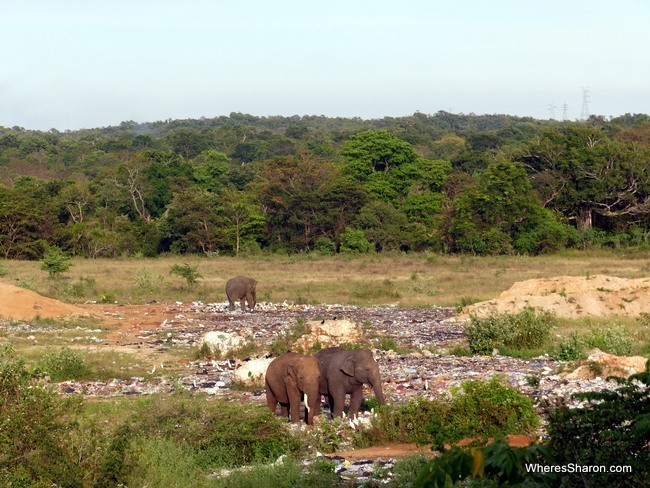 Some of the elephants at the tip

At the end of the safari we went by a tip where there was a whole lot of elephants going through the trash. It made me sad initially, but then when I thought about it more, I realised this is probably what’s going to happen when there are wild elephants.

The kids had a great time – thankfully! I had worried they would be bored and whiny as it was a long time and finished after they would usually be in bed (we are still not completely in Sri Lankan time). It did help a lot that we shared our safari with two fantastic Brits who were great with the kids. 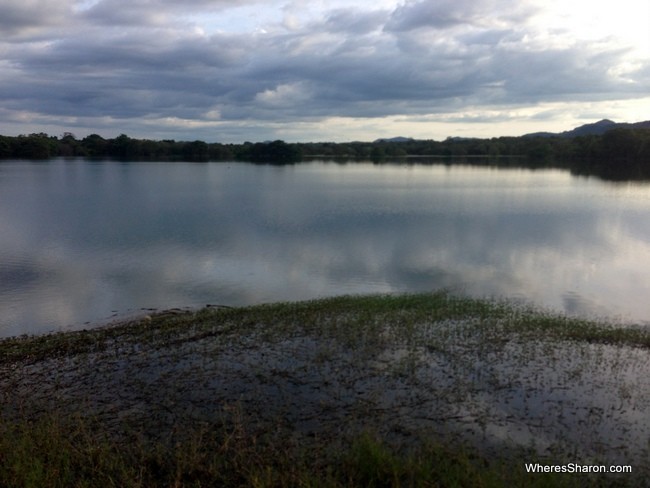 They did not care that much about the animals. They found driving around in the jeep exciting, climbing up the rocks and talking to the other people fantastic though! S did talk a lot about the safari at Werribee Zoo in Melbourne that we have done many times and to be honest, they seem to enjoy that far more than the real thing.

In saying all of that, I would still recommend it as a family activity and I imagine with older kids it would be even better. We had a lot of fun doing it together.

We loved having the Sri Lanka safari experience and it was great doing it with the kids. However, a lot of the time was spent driving around in the heat. We did not see much and I don’t really know if safaris are for me.

Overall, despite all our complaints, we did really enjoy this safari and I am really glad we did one in Sri Lanka to see another side of this great island. I am not rushing to do one again though.

Read the full details of our stay in Polonnaruwa, the jumping off point for Minneriya National Park as well as the ancient city of Polonnaruwa. You can also read our full Sri Lanka travel guide.

You may also enjoy reading about going on safari in South Africa here.

Have you been on safari? Were you surrounded by other tourists?

Quick Guide to Places to Visit in Polonnaruwa 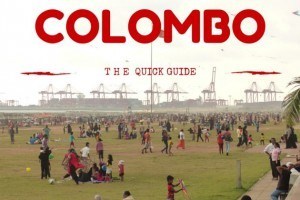 We started our Sri Lankan adventure in the biggest city, Colombo. This city completely surprised us. It's clean, pleasant,...
Copyright 2013 Jupiter Premium Magazine Theme
Back to top