We started our Sri Lankan adventure in the biggest city, Colombo. This city completely surprised us. It’s clean, pleasant, and there are some fun things to do in Colombo. Although there are no real must visit attractions, it is a nice place to visit and spend a couple of days. We are certainly not sorry that we visited this lovely city, and we would recommend it to anyone visiting Sri Lanka.

Below, you will find our quick guide to Colombo to help you work out what to see, where to stay and how to get around. 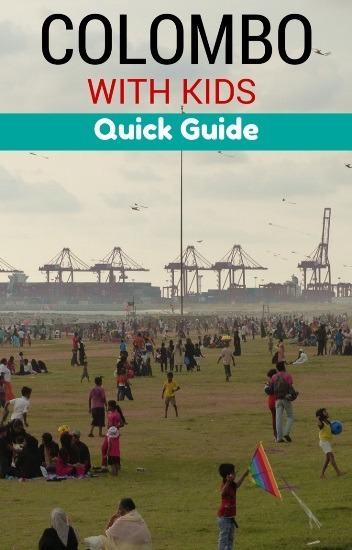 Top things to do in Colombo

If you are wondering what to do in Colombo, this list of Colombo things to do is a good place to start! I’d say that there isn’t really any must-do Colombo attractions. Just a list of places of places to visit in Colombo which are nice places to explore and hang out. 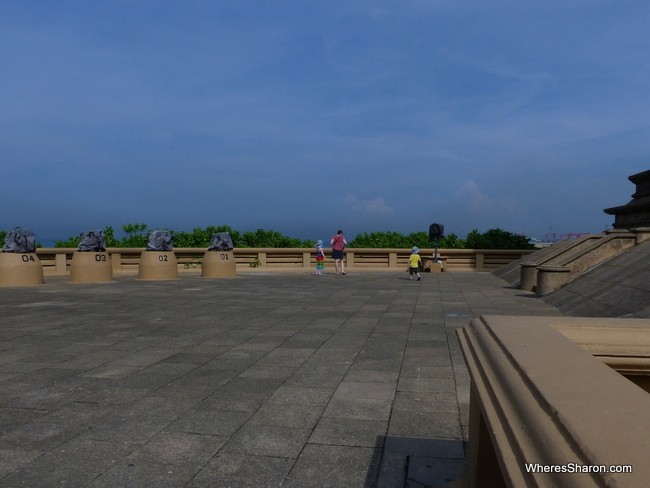 This is the natural place to start exploring the places to see in Colombo.

This area of Colombo was previously a fort with the sea and a moat surrounding it. Today, there is no fort but there are plenty of grand colonial era buildings mixed in with modern buildings and relatively quiet streets. This is a nice area for a wander.

We enjoyed climbing up the steps to the base of the Old Galle Buck Lighthouse, exploring the interior of Central Point and Sambodhi Chaitiya made for quite a sight. However, I must admit that I was a bit disappointed. I had expected an actual fort and the area was quite low key, although it was nice. However, I think with the right expectations, a walk here would be a nice way to see more of Colombo. 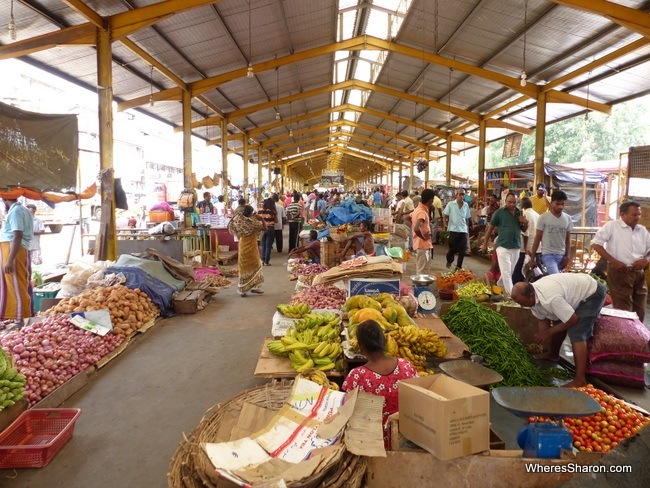 Federation of Self Employees Market

Next to the Fort is the market district of Pettah. A bustling area chock full of markets as well as the main train and bus stations. This is where we started our time in Colombo and we were excited to head back and explore it some more. This is one of the best places to visit in Colombo if you want to do some shopping or surround yourself by locals and get lost for awhile.

It is also the place to see a mixture of Sri Lankan ethnic groups with a mixture of religious buildings. We just explored the markets and it was fun. There were lots of different goods, and we picked up some yummy (and cheap) fruit. The Federation of Self Employees Market is a good place to start. 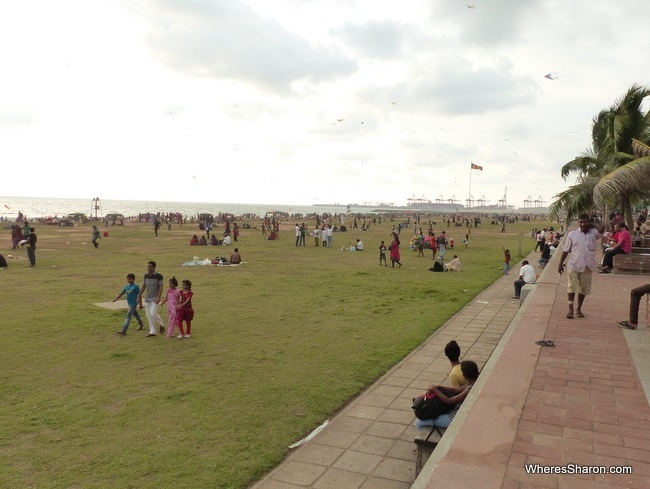 This was one of our best things to do in Colombo with kids.

Basically, Galle Face Green is a big open park area on the water front just south of the fort. In the evenings it is full of locals (especially families) having fun and chilling out. There are lots of kites flying, ball games and bubbles – the latter was particularly a hit with my kids.

The waterfront is lined with food stalls including tables and chairs. It was great to sit here and eat and people watch as the sun set.  We highly recommend it! 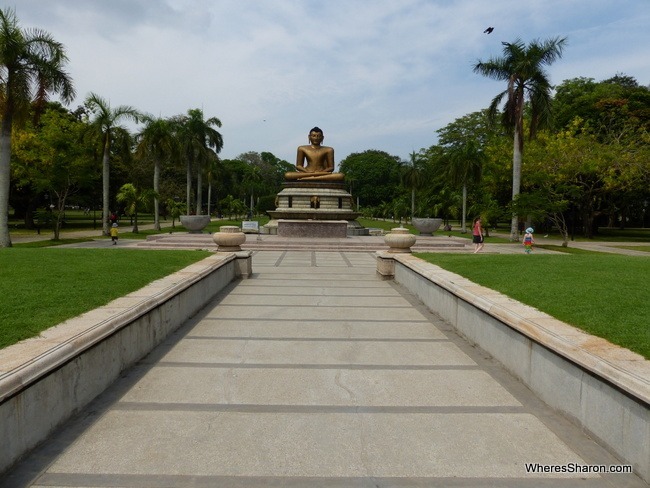 Colombo’s biggest park is another worthwhile attraction in Colombo, especially if you want to check out the National Museum or chill out for awhile. 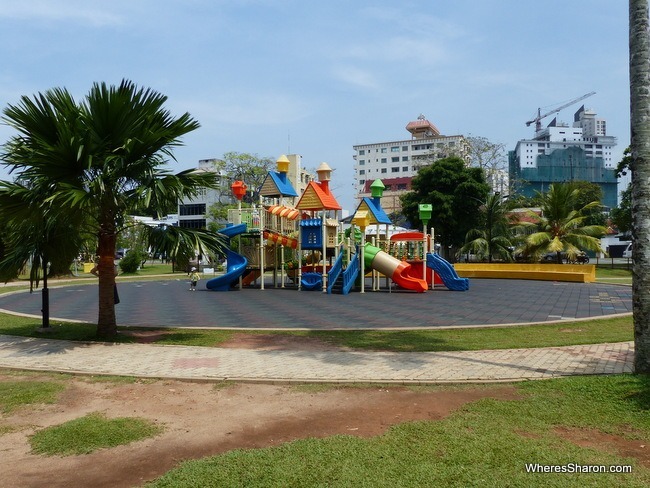 The National Museum is located across the road, and we would definitely have visited this had we had time. 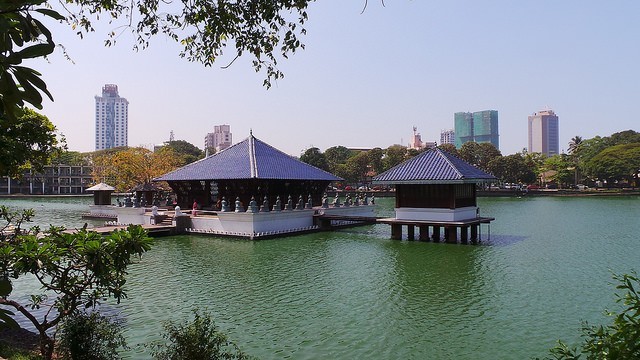 Beira Lake is located just south of the main Fort and Pettah areas. Here, there is an island, park, playground and temple.

There are some fabulous choices in Colombo. We were on a tight budget so were very happy to find the Ocean Studios Apartments which was the best hotel in Colombo for us. 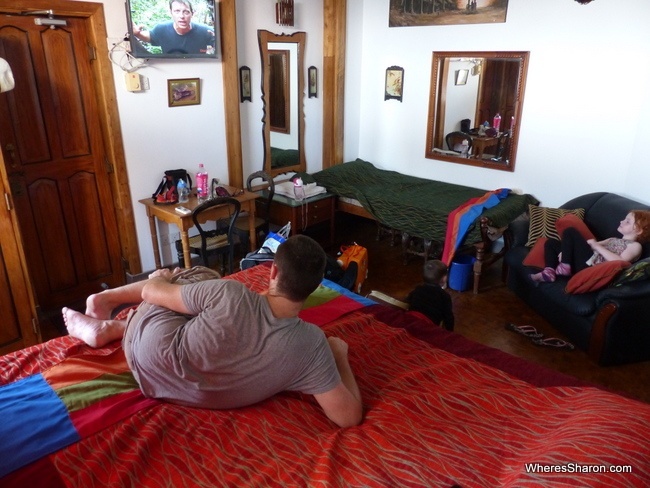 Our room at Ocean Studios Apartments

These apartments are in a great location just off Galle Road and near Kollupititiya station. We had a triple studio apartment which had a separate kitchen (although this wasn’t equipped so we couldn’t have cooked), couch, table and chairs, single and queen size bed. It was an absolute steal for only AUD$66 (Colombo accommodation is not cheap). Some of the apartments also have balconies and ocean views. There are cheaper options if you don’t require a triple.

You can read more about Ocean Studios Apartments and see the latest prices here.

When we returned to Colombo for a final night at the end of our Sri Lankan adventure, we stayed at the Shalimar Hotel.

We picked this hotel as it was a great price, had great reviews and was conveniently located across the road from the Maradana train station. Since we were only in Colombo one night, location was key for us and this definitely ticked that box. 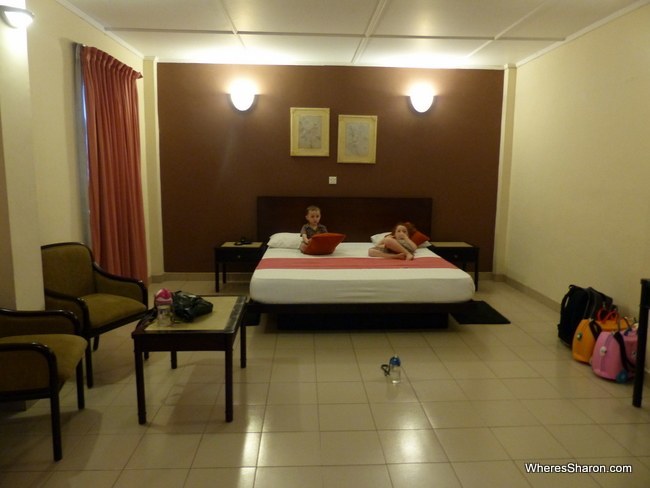 Our room at the Shalimar Hotel

We had a massive room with air conditioning and cable TV. The room had a king bed. There is also a great restaurant at the hotel which is cheap, filling and had some of the best food that we had in Sri Lanka. This was a very easy place to stay.

You can see the latest prices for Shalimar Hotel here. We paid about 5,100 rupees including all charges.

If you are happy to stay outside of Colombo in exchange for some peace and relaxation combined with a beach front location, then I recommend The Sands. 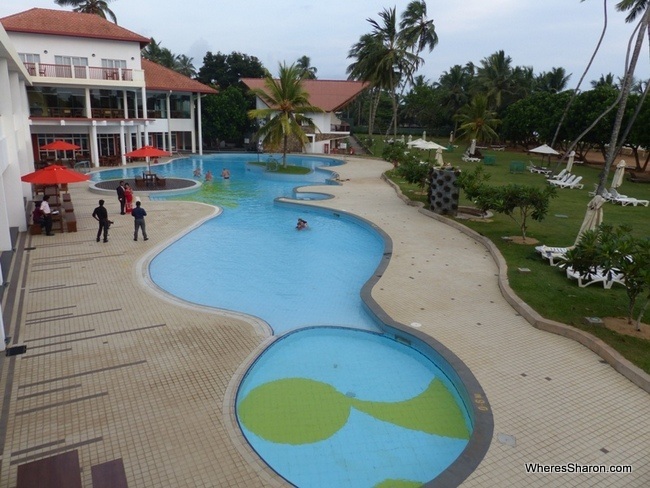 The pool at The Sands

This hotel is just outside of Colombo and is a lovely option for visiting Colombo on a day trip. It’s an easy drive from the airport and is also located near a train station. There are many facilities here including the best pool for kids that we have experienced. You can read our full review or check out the latest prices here.

Some other options are:

Where to eat in Colombo 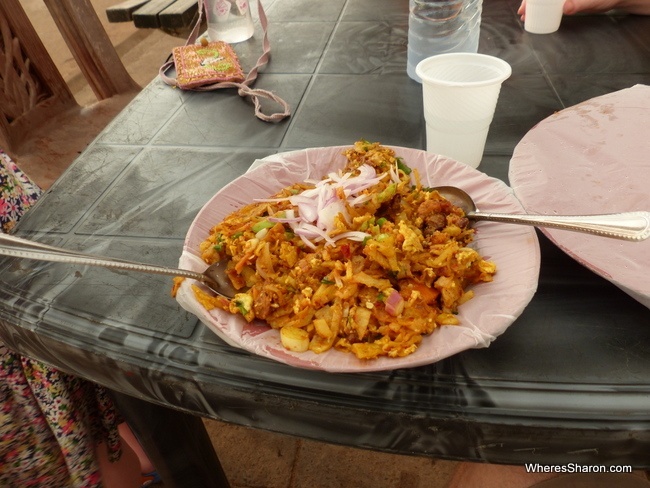 If there was one thing that worried me the most about visiting Sri Lanka, it was a possible lack of food. Our guide book and some of the blog posts I read talked about how hard it could be to find places to eat and that we would need to be eating in our hotels. Thankfully, food was not a problem at all in Colombo.

We never really had to seek it out, there was always something around. We had a great first meal at Nana at Galle Face Green and I definitely recommend a dinner or two here. It was cheap and easy by the ocean with a great atmosphere. The Pettah region was just full of snacks and food, and even at Viharamahadevi Park it was easy to have some lunch.

As expected, being a vegetarian is super easy in Colombo.

There are flights from many places, especially in Asia, to Colombo. We caught an ultra cheap flight from Kuala Lumpur which took just over three hours.

Once you arrive in the country, it is quick, cheap and easy to get to the Fort area. A bus from the airport is only 110 rupees each (no kid discount). As you exit the airport, turn left, keep walking to the end and then go right. The buses are up over to your left – very easy to find. People moved so we had seats together without us asking and we were at the central bus station in less than 40 minutes. You can also take a cab but it costs a lot more.

From elsewhere in the country, Colombo is naturally a hub and it is easy to get here from just about anywhere. There is a reasonable train network which is centred on Colombo.

There are four main ways to get around Colombo – trains, buses, rickshaws and taxis. 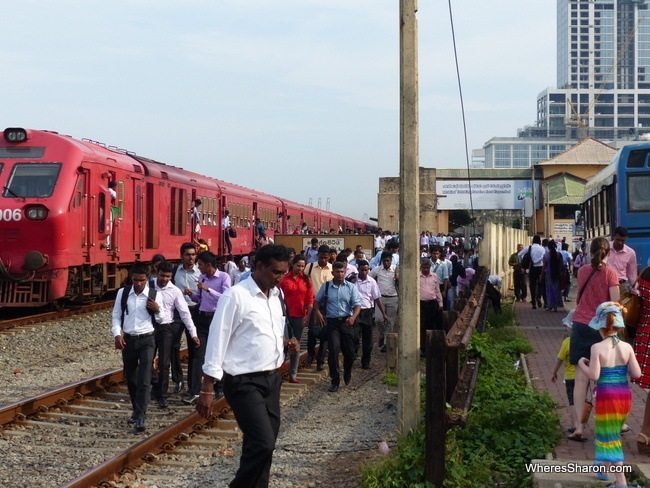 Our local train station in Colombo just after the train arrived

Unfortunately the train network is limited and not frequent outside of peak hour so, despite staying close to the station, we were not able to make much use of this. We did take one and it was lots of fun. The train was mega full when it pulled up at our station in Kollupitiya, so we were initially worried. However, most people hopped off at this stop and people moved so the kids had seats. It was very easy and super cheap at 30 rupees for the four of us (about AUD$0.30!).

I have a warning though. The platform at both ends of our journey was nowhere near high enough so we had to climb up and down ladders with a bit of a jump! It is not something I would want to do with young kids and luggage.

Rickshaws are far more prevalent than taxis. Many have metres, not all will use them although we actually found that we were better off negotiating beforehand. We were able to get reasonable prices (usually about 150 rupees for places we went) and then they went right there instead of driving round like they didn’t know where they were going. 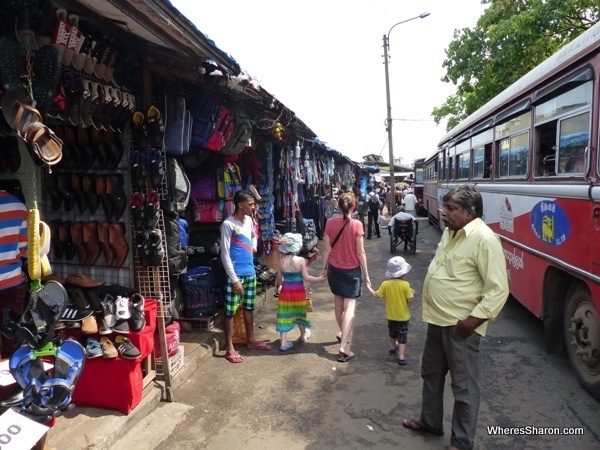 Exploring the markets in Pettah

Colombo is a great city to visit with kids. We were impressed by the playgrounds we came across, the footpaths and how friendly people were to our children (although sometimes too friendly – they were touched a bit too much at Pettah). We got a few stares but nothing like the crowds that gathered round us when we visited the Philippines thanks to S’s red hair.

The kids also had a good time. Everywhere we visited they were able to explore and just be kids.

I was worried about the food, but there were enough food options around that we were able to find items that they liked and were not too spicy. However, do be warned that most food is spicy so double check before buying if this is an issue for you.

We had a AUD$110 a day budget in Colombo and we came in about $10 under this which we were impressed with since our hotel cost about $67 a night.

Transportation was cheap, although it did add up a bit. We paid between 100-300 rupees per ride (AUS$1-3) on a rickshaw, but we caught quite a few of them. Food was also very good value and we were able to eat for about $2 per meal. It’s easy to find snacks from about 20 rupees.

We loved Colombo! I am not sure exactly what I expected, but it wasn’t what I found. I think because I have heard Sri Lanka described as “India lite” that I expected a less full on version of an Indian city, but it did not remind me of India at all. In fact, I don’t think I have ever been to a capital of a developing country that is just so damn pleasant.

There are nice wide streets and footpaths (better footpaths than many developed countries), I barely noticed any trash, and the streets were not crowded at all. People were helpful, we were barely hassled and I started to understand why so many people love Sri Lanka.

Our favourite thing to see in Colombo was definitely Galle Face Green. It was great to hang out here and just enjoy the experience of being in Sri Lanka.

All in all, we had a great experience and we will no doubt come back to Colombo during our three weeks in Sri Lanka.

You can also read about our next stop in the amazing ancient city of Polonnaruwa or check out our full Sri Lanka travel guide.