Our Guide of Things to do in Sandakan

Sandakan is a lesser known but nonetheless fantastic destination in Borneo, Malaysia. It is popular primarily because of the famous Orangutan Rehabilitation Center located in Sepilok. Sepilok is its own town located about half an hour from Sandakan, but there is so much more to see in Sandakan itself.

Sandakan is an important site for history and many will be familiar with the Sandakan Death Marches in World War II.

We flew from Kota Kinabalu to Sandakan and had a fabulous time here. Although we only spent a short time there, we could have spent longer. There are some great attractions around Sandakan.

Below you will find a list of what to do in Sandakan to help you plan your trip. 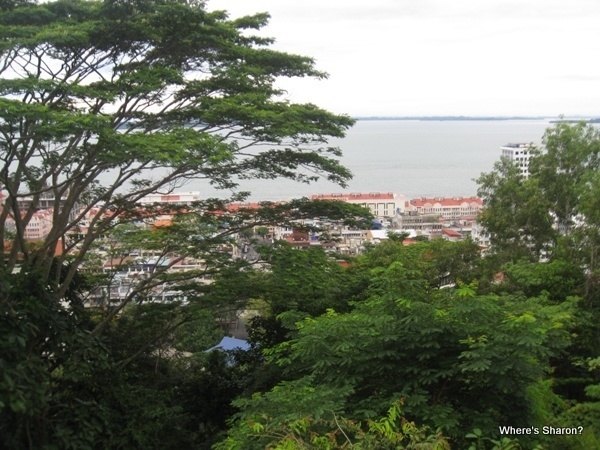 Views of Sandakan from the lookout

Things to do in Sandakan Borneo

For many people the Sepilok Orangutan Rehabilitation Center is the main reason to come to Sandakan – it is probably the best known Sandakan attraction and one of the few places to get up close to orangutans. 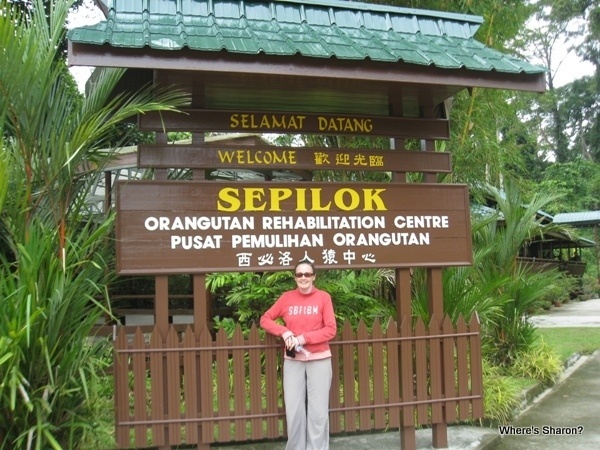 It was then off to the feeding platform for the morning feeding time. They put food out for the orangutans that have been released back into the wild twice a day. It is variable how many orangutans show up and sometimes there isn’t any. So it’s not guaranteed that you will see one. We didn’t have to worry for long that we wouldn’t see any. On the jungle walk to the feeding platform, we saw quite a few swinging around in the trees. Very cool!

At the feeding platform there were quite a few people. The food was put out and it didn’t take long for one to appear. It went on for about 30 minutes and about 6 different orangutans came out. It was awesome!! A couple of them approached from the walkway that we were standing on so you could see them very close, other ones swung in. Amazing stuff and I enjoyed it a lot. 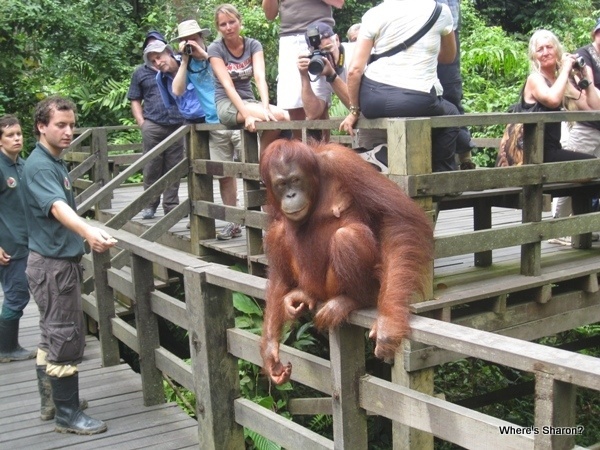 I first saw the Gomangton Caves on the series Planet Earth – but it is not one of the Sandakan things to do for the faint hearted. With cockroaches on the ground and over two million bats filling the cave, this natural limestone cave system is certainly a sight to see.

The caves are located southwest of Sandakan and are open all year round. I recommend wearing some high quality shoes. If you come to the caves at sunset, you will see the bats flying out of the cave. This is a pretty creepy site but fascinating nonetheless.

The Sandakan War Memorial Park, funded by the Australian Government, is situated just outside of Sandakan. It is the site of the Japanese POW camp where many Australians and British POW’s lived (and died) in hell. It was also the starting point for the infamous death marches. By September 1944 there were 1800 Australian and 600 British troops here. 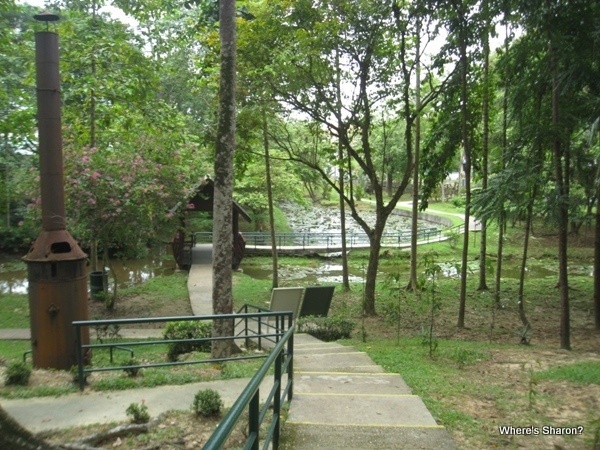 Of these, only 6 Australians survived and that’s because they managed to escape. Nearly 1/8 of Australian casualties in the Pacific part of World War II died here. There’s an exhibition hall with lots of information and accounts from the few survivors.

As you can imagine, it’s incredibly depressing and moving – and definitely worth the visit.

The House of Agnes Keith

The house not only gives a great feeling of history but it is located next door to the Sandakan English Tea House which is the perfect way to spend an afternoon.

Sandakan is not the best place to go for a shopping trip, but it does have a mall. The Harbour Mall is the only real shopping mall in Sandakan and has some western brands.

The best shopping in Sandakan is probably the local produce! The markets were huge and it was interesting to see the different variety of foods sold in Sandakan. 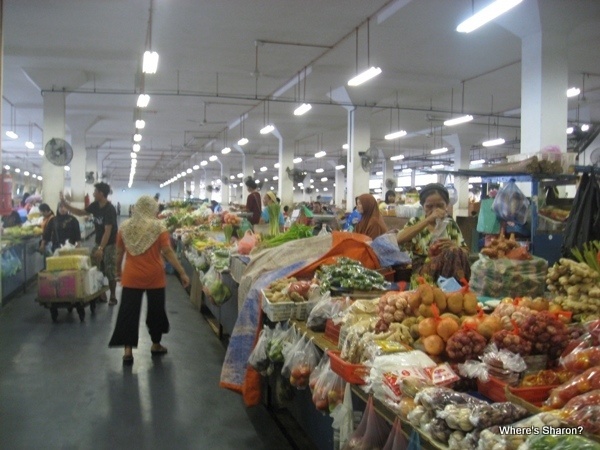 Turtle Island is both a popular spot to visit and stay. It takes about an hour and 15 minute boat ride from Sandakan to get to Turtle Island The Island is exactly that… an island of turtles! The only official agency for booking trips to Turtle Island is Crystal Quest – and note that it is not cheap. In addition to the cost of getting there, there is also an entrance fee and camera fee so decide if you really want to go.

There are tour groups that offer basic accommodation to stay on the island. You can also snorkel here and enjoy a day by the beach.

The island is definitely a great place to visit but whether it is worth the cost is up to you.

The Best Hotels in Sandakan Malaysia

We stayed at the Ibis Styles Sandakan Hotel. It was inexpensive and quite nice actually! Our room was right on the waters edge with views over the harbour, and was well located in the downtown area and breakfast was included. 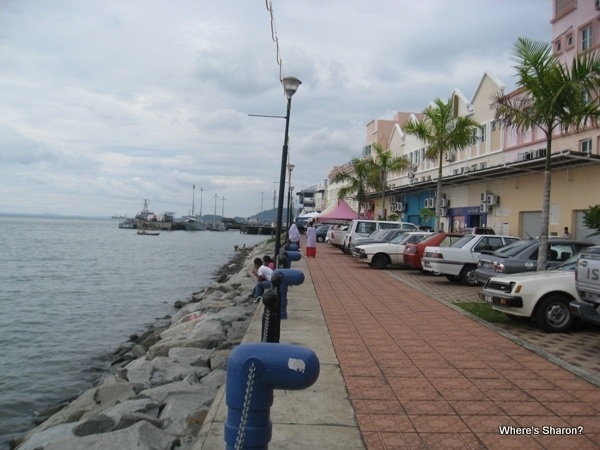 Waterfront in front of our hotel

It was an easy walk to local restaurants and was comfortable and clean. We chose the double room which provided enough space for a short stay.

Sandakan has other great hotels to suit any budget. Here are some other options to consider:

Nak Hotel Sandakan – The Nak Hotel Sandakan is the best hotel in Sandakan in its price range and is a great option for travellers looking for budget Sandakan accommodation. The hotel has a rooftop bar with beautiful harbour views, free WiFi in public areas and is located nearby to the central bus station, Agnes Keith’s house and the ferry to Turtle Island. Click here to see the latest prices.

Borneo Sandakan Backpackers – For backpackers, Borneo Sandakan Backpackers is the perfect budget hotel in Sandakan. Rooms are airconditioned with free WiFi, are clean, comfortable and offer value for money. The location is perfect for exploring Sandakan, located close to the central bus station. Bathrooms are shared and the hotel has a luggage holding service. Click here to see the latest prices.

Find a Sandakan map below of the attractions listed above to see how sparsely things are located.

A popular entry point to Sandakan is from Kota Kinablu. We flew to Sandakan mainly because we found ridiculously cheap flights there – it was $5 return!!

There are also direct flights from bigger cities too, with Air Asia flying from KL to Sandakan direct daily.

Much like the rest of South East Asia, Sandakan is cheap. This makes getting a taxi a cheap and convenient way to get around. It is also the best way – Sandakan does not have the most developed public transport system.

Your other option is to get a bus. Buses depart to major attractions from the central bus station, and tickets are cheap. Buses are old and are not usually air-conditioned and mostly for the locals, but they are definitely a cheap way to get around.

To get to and from the airport, you can also choose to take a minibus. We decided to do this on the way back to the airport. This turned out to be an excellent choice. It was a lot cheaper than a taxi and a lot more fun!

We enjoyed Sandakan a lot and could have spent a couple of days there.

Just driving around Sandakan is interesting with lots of buildings to check out including a big slummy area of stilt houses over water. It is definitely a contrast to the bigger modern cities of Malaysia where you can see a different way of life for the locals.

Although the attractions are great to see, I would say to stick to a just a couple of days. Although Sandakan is great – it does lack attractions and there is so much more in Malaysia to see.

You can also read our guide to Kuching and about our time in Kota Kinabalu.

Have you been to Sandakan? What was the best part?

Disclaimer: This article contains affiliate links. This means that if you make a booking after clicking on one of these links that we may receive a small commission at no extra cost to you.