17 July, 2018
This post may contain compensated links. Find more info in my disclaimer.

The Berkshires in Massachusetts are known for their fall foliage, but there are even more kid-friendly things to do during the summer months. 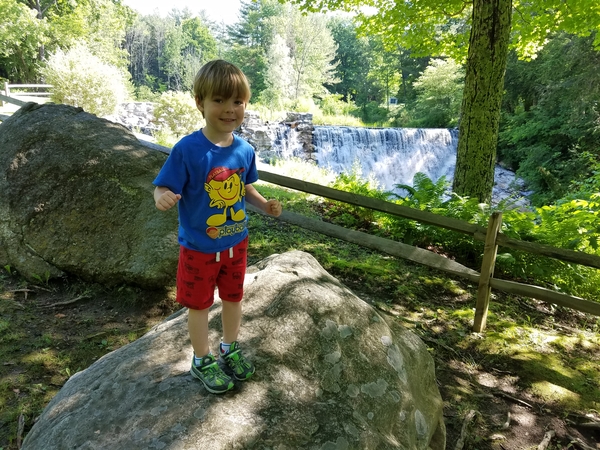 When people think of the Berkshires they mostly think of the quaint area around Lenox with it’s famous outdoor music venue, Tanglewood. But a bit further north is a growing area for art and tourism. Major draws include Mass MoCA, an innovative modern museum set in a huge, repurposed factory building complex, the Williamstown Theatre Festival which is a hot spot for big name actors who want to spend a summer doing theater off-Broadway and Mt. Greylock, the tallest mountain in Massachusetts and a visual landmark across Adams, North Adams and Williamstown. Mt. Greylock is famous for it’s yearly Columbus Day weekend hike, the Greylock Ramble, which is a popular way to experience the foliage in October. The mountain was also recently unveiled as the secret location of J.K. Rowling’s American wizarding school, so you can expect some sort of merchandising related to that soon.

We visited family in the Berkshires in late June and were blessed with some beautiful summer days. On our first morning in North Adams, we woke early and decided to stop by the Natural Bridge State Park. We spent about 45 minutes exploring the waterfall, the natural bridge and the surrounding sites, so it was good for a brief stop. There was a fair bit of information about glacial erosion and the history of the park as a white marble quarry. 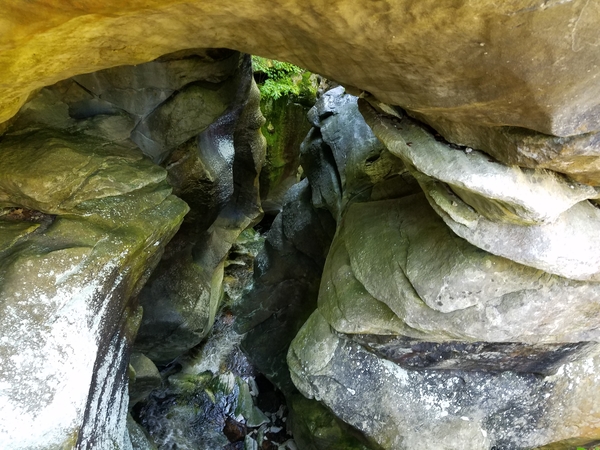 River under the natural bridge

There are few affordable hotels in the area, but one of the best options is the Holiday Inn Berkshires, which is centrally located in downtown North Adams and just two blocks away from Mass MoCA. Mass MoCA is a particularly great museum for young children. Some modern art museums have a large installation or two, but Mass MoCA specializes in large-scale exhibits that take advantage of the unique building complex. The largest room is a full 1/4 mile in length to give you a sense of the size of the place. 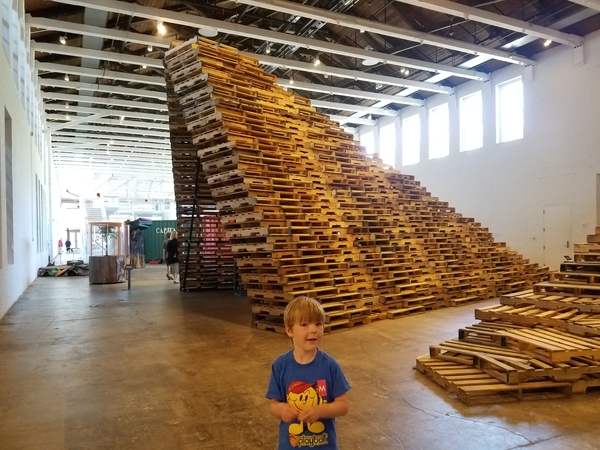 One of many installation exhibits in Mass MoCA

Our three-year-old loved the large open rooms, the outdoor areas and of course Kidspace, an area for children to create their own art. 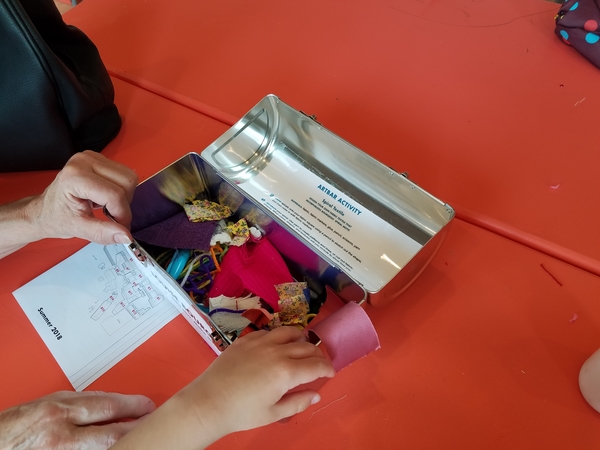 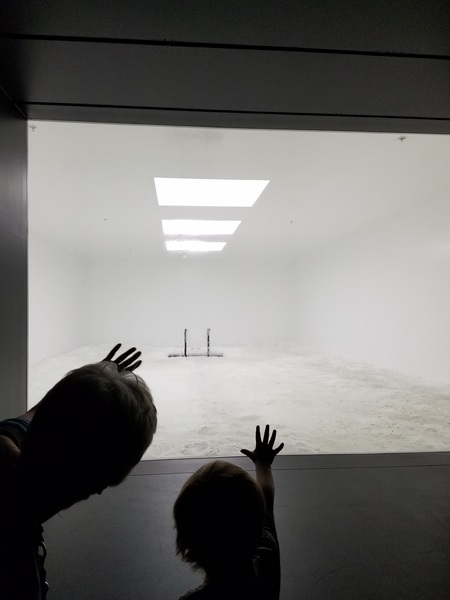 If you really like art, there are tons of things to do in North Adams and Williamstown. Just down the street from Mass MoCA is the Berkshire Artist Museum, set in a converted church, while the biggest museum in Williamstown is The Clark Art Institute. The entire area is full of galleries and local artists, many of whom have studios in the nearby Eclipse Mill Artist Lofts. There has been a trend in the Berkshires to repurpose existing infrastructure for new uses, which gives the Berkshires a unique atmosphere. These old mill towns are being revitalized as art and tourism communities while retaining and celebrating much of their history and natural beauty.

North Adams was once home to textile mills, paper mills and stone quarries. To support those industries, train tracks led from North Adams to the bigger city of Pittsfield, but when the mills closed the trains stopped and the tracks fell into disrepair. However, the last few years of progress have given new life to these old tracks. A few years ago, the section of track from Adams to Lanesborough was converted into the Ashuwillticook Rail Trail, a wide, multi-use walking/running/biking trail that cuts through some beautiful scenery. The trail is mostly flat and was a great chance for us let our three-year-old let out some “early morning wiggles” before the day’s heat kicked in. 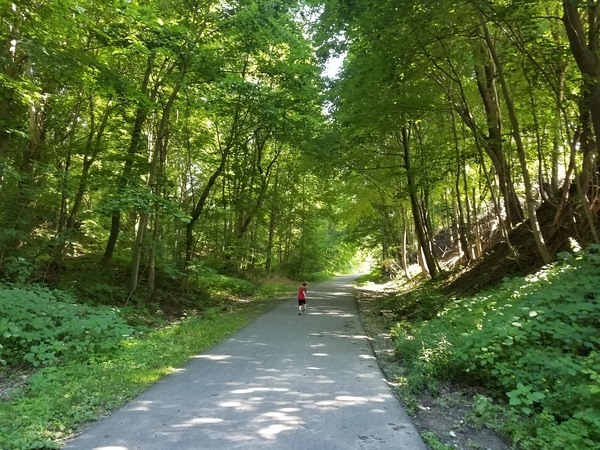 Along the Ashuwillticook Rail Trail in Adams

The rail trail ends in Adams, and at that point the tracks still remain. Those tracks have very recently been restored for seasonal use by a scenic train. We had the pleasure of being some of the first guests on the Hoosac Valley Train Ride, an hour long back-and-forth trip from Adams to North Adams. 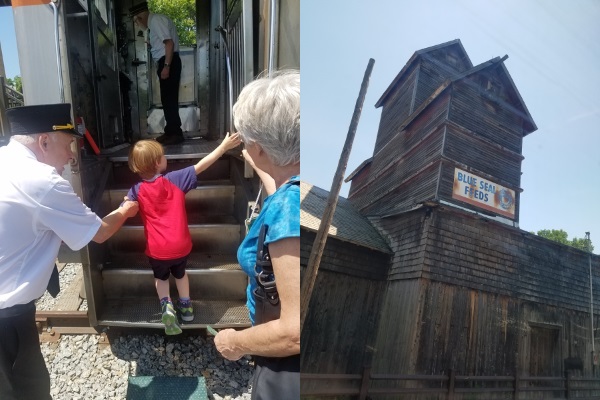 Boarding the train and an old building along the way

The train ride wasn’t super exciting, but the volunteer conductor gave a nice talk along the way about the history of the tracks and the area that gave us some new perspective. And of course, our son loved riding on a train! If you have a child who is train-crazy, you should definitely stop by the Berkshire Scenic Railway Museum which has restored trains on site plus a bunch of exhibits and information. That museum is just a block or two from the previously mentioned Holiday Inn in North Adams.

All the art and history we were seeing was great, but when the summer gets hot we just want to go swimming! There are plenty of options to cool off in one of the lakes, ponds or swimming holes in the area. We headed to an old favorite: Windsor Lake in North Adams, a perfect spot with shady picnic tables, a small sandy beach (with two lifeguards on duty on Saturday) and a playground. There is also a large grassy slope where several kids were playing frisbee, soccer and baseball. 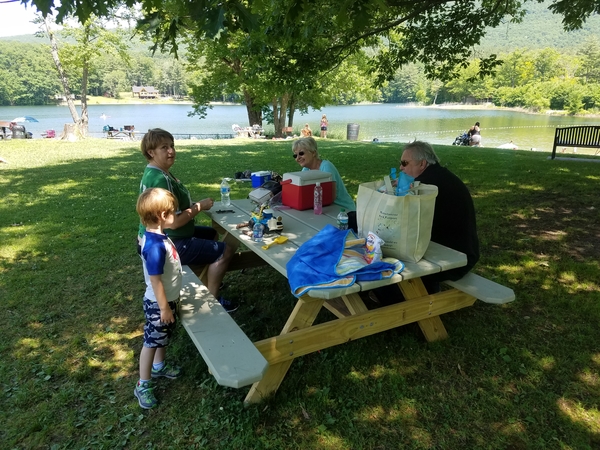 Windsor Lake has restrooms, changing rooms and even a place to buy ice cream. During the summer months, the lake also hosts a variety of concerts.

On our last evening in the Berkshires, we decided to end our trip with a ride (or two) at the new Berkshire Carousel in Pittsfield. 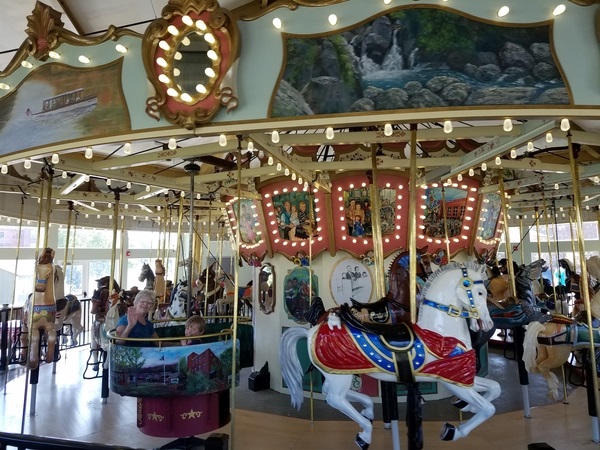 The story of the Berkshire Carousel is quite interesting. It was opened in 2016 after over a decade of development. The idea for the carousel began almost 10 years before that, when the Jim Shulman, creator of the carousel, heard Christopher Reeve give a commencement address at nearby Williams College. Reeve spoke about the importance of having a strong base and community, and on hearing this speech he decided to give something back to his community that had helped him throughout his career. The carousel was funded primarily by grassroots efforts and every one of the horses was carved locally. It is the first classical, wooden carousel carved in Massachusetts in 100 years, and a great example of how the Berkshires are finding inspiration in the past while building toward the future.

Very Good Article. I really appreciate it.
Well researched article. Now you got one regular visitor to your website for new topics. Keep up the Good Work Thanks for always sharing.