29 January, 2019
This post may contain compensated links. Find more info in my disclaimer.

Bryce Canyon National Park was the 2nd stop on our hiking trip through Utah.

After a great time in Zion, we drove on to Bryce Canyon National Park to get close to those otherworldly, orange-tinted hoodoos. 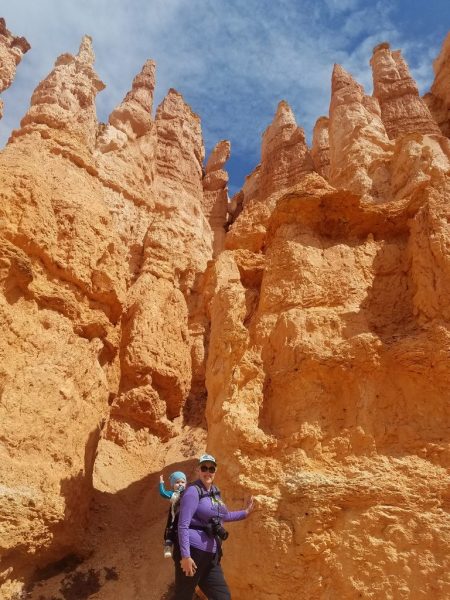 Bryce Canyon has the most beautiful 3 mile hike I’ve ever been on! But before we got to Bryce, we made a quick stop in Cedar City to pick up a family friend (Tori) who joined us for the rest of our Utah trip. We decided to extend our detour to check out the Parowan Gap Petroglyphs before making our way south to Bryce. 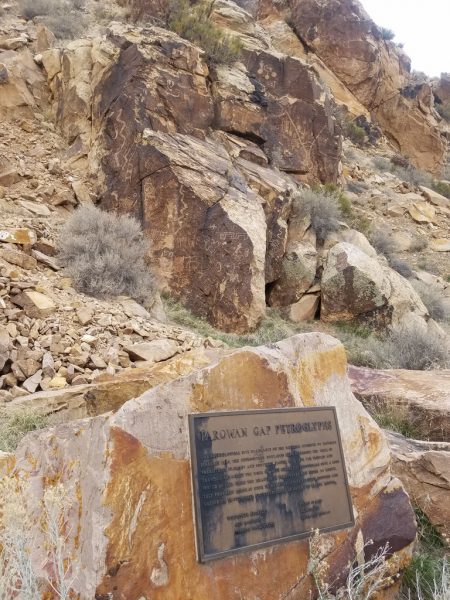 These petroglyphs are definitely a lesser-known sight in Utah, but there are a few things that made them worthwhile. Unlike most historical sites in the U.S., the petroglyphs are completely free to visit and fully accessible to walk through. This gave us and the kids a chance to get up close to any drawing we liked and speculate what it signified and how old it might be. 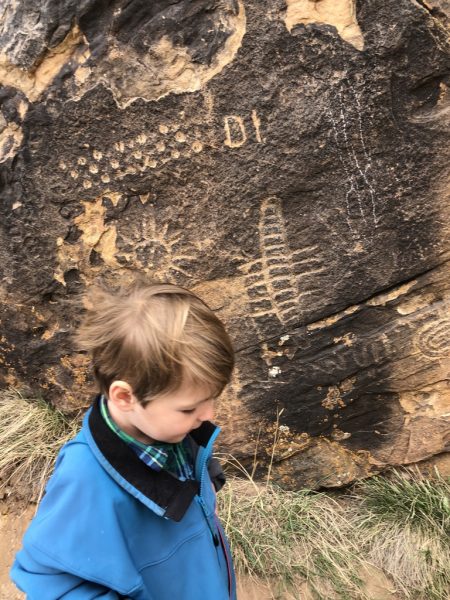 Up close to the petroglyphs – no touching!

The location of the petroglyphs is a large clump of boulders on an otherwise barren landscape. It is easy to imagine how thousands of years ago nomadic people would have been drawn to these boulders as a notable stopping point on their journey, with few other landmarks within sight. Hundreds if not thousands of individual drawings are clearly visible on many of the rocks, probably accumulated over a long period by various people. One other group of tourists came while were there, but for most of our visit the area was ours alone to enjoy.

Unlike Zion, hiking Bryce Canyon was a single stop for us. There is a long road of viewpoints around the outside and some longer hikes through the belly of the canyon, but with kids strapped on us we decided on focus on two hikes: the Rim Trail and the Queens Garden to Navajo Loop.

We arrived early in the morning and it was FREEZING cold at the top of the canyon. We started with the Rim Trail to get an overview of the canyon. 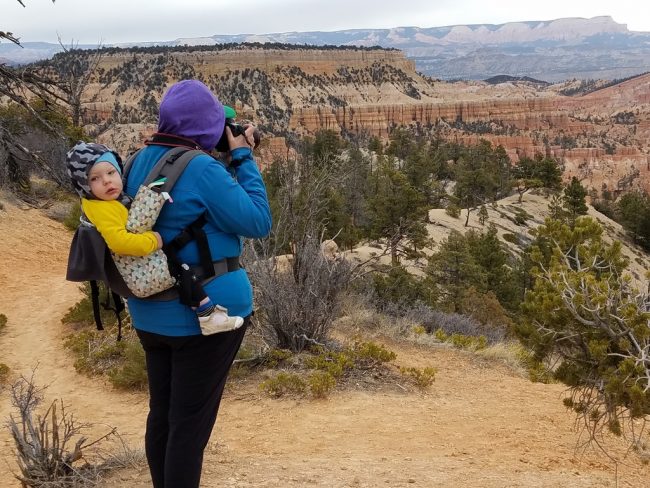 We parked near Sunrise Point and walking north along the rim for a while. Oscar decided he wanted to play in the dirt rather than continue along the rim so we had some morning play on the top of the canyon. 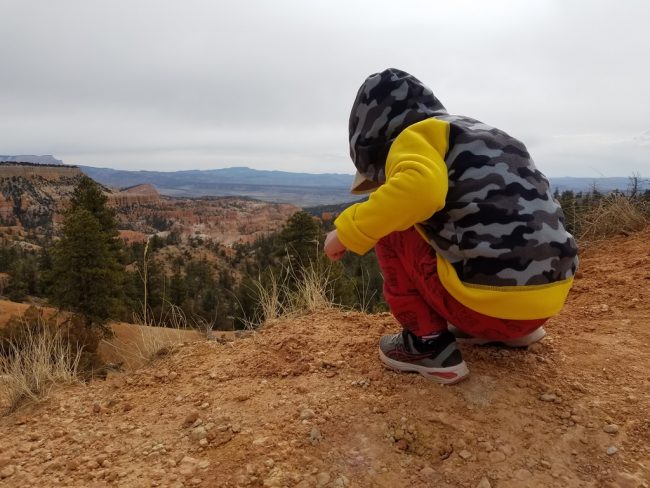 Too cold to hike!

After a point we decided to turn around because we were simply getting further away from the main hike we wanted to do that morning: the Queens Garden Trail. As we approached the start of the trail we noticed a group of horseback riders descending into the canyon. If you have older kids who are comfortable on a horse, this could be an amazing way to see Bryce! 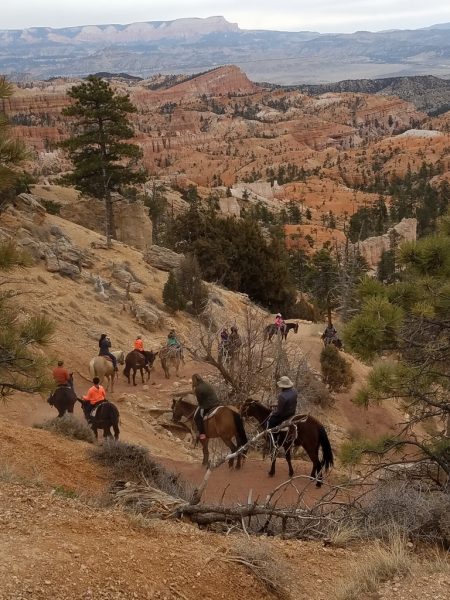 We had made it to the trailhead for Queens Garden but decided to check out the view from Sunrise Point before starting the hike, which is right next to the marked trailhead. 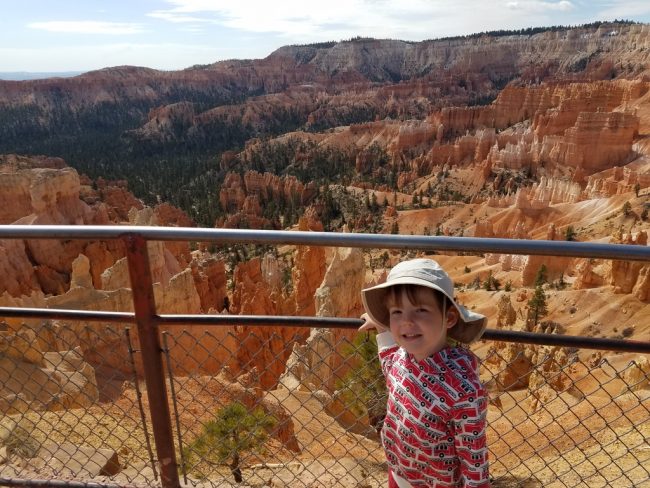 The air was quickly warming and the colors of the canyon grew much more vivid as the sun rose. The gray sky was now a clear and happy blue. Sunrise Point definitely got us ready to see those hoodoos up close!

It is a shame there isn’t an easier name for this hike, because it was my favorite hike of the trip, possible of all time! There are a few different variations possible for this loop trail. I recommend following our path from Sunrise Point down the Queens Garden Trail, switching over to the Navajo Loop (most people do this) then returning up to Sunset Point (preferably through Wall Street, if that trail is open) and finally, walking along the paved portion of the Rim Trail back to Sunrise Point. The reason I recommend this approach is the descent from Sunrise Point is much more scenic than down the Navajo Trail, so you are able to enjoy interesting views in front of you the entire hike down. 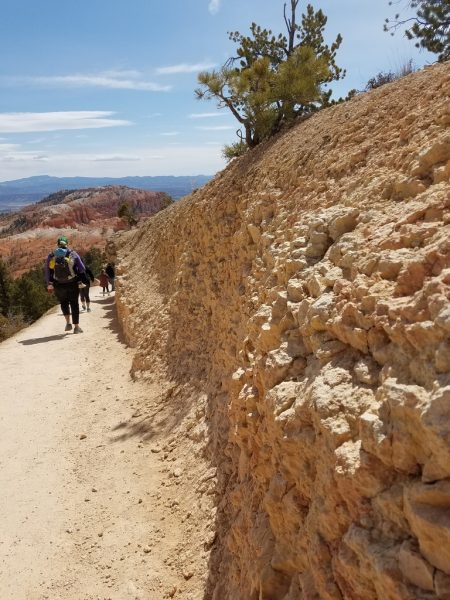 Starting the hike to Queen’s Garden

Before getting to the richly-colored sandstone, we saw this interesting wall of crumbly sand alongside the trail. With all the big views in front of us, it is easy to miss some of the more subtle features of the trail. 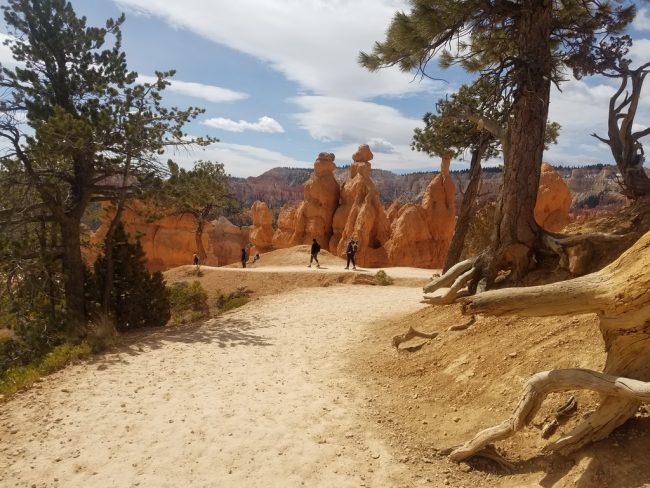 We quickly got up close to the hoodoos as we continued down the trail. The trail curved its path steadily down into the canyon, showcasing panoramic views around every corner. 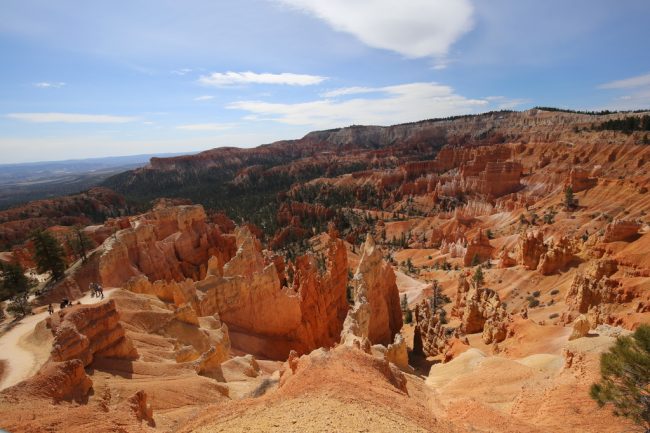 A beautiful panoramic view on the way down

Notice the trail to the left of the photo. It looks a bit treacherous from some photos, but the trail was wide and stable enough for two-way traffic, which was a common occurrence on this busy trail. 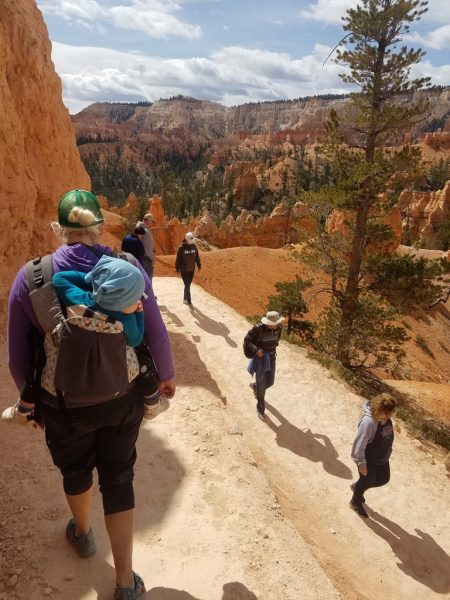 A switchback on the descent

For those concerned about footing, the sandy path was slippery in parts and we saw more than one person fall on their butt as they tried to hurry down the trail. Careful hikers should be fine, but with a baby on my back I wish I had brought a walking stick for insurance. 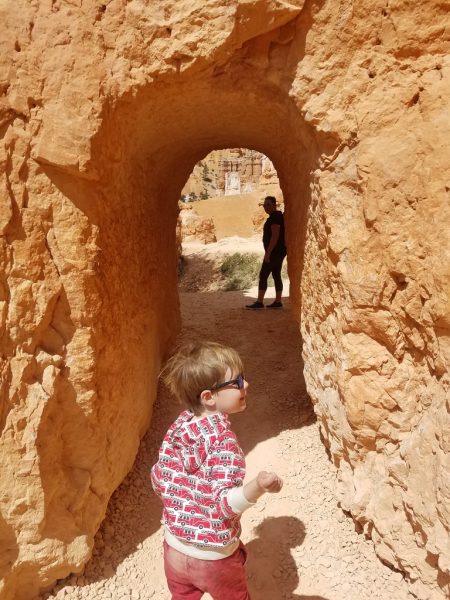 As we approached the canyon floor, we came across some neat features. This tunnel through the sandstone was part of the trail and served as a bit of a bottleneck as people stopped for photos from both directions. 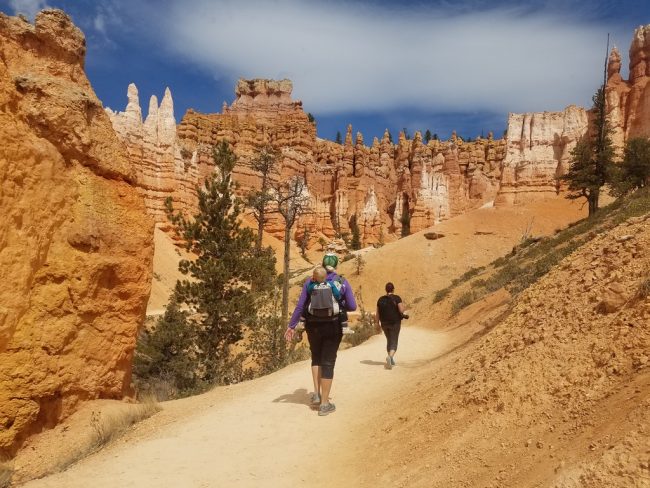 Hiking near the canyon floor 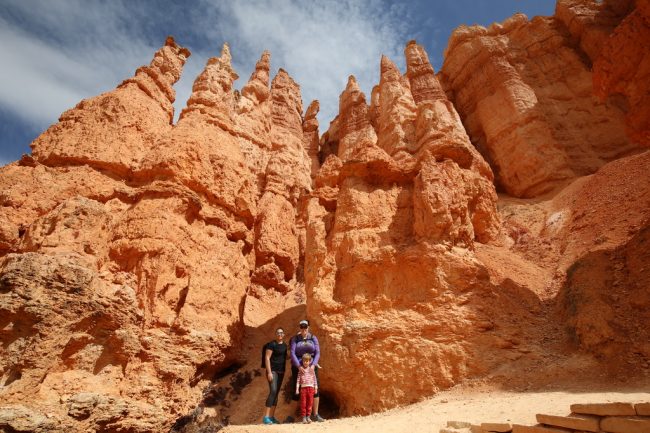 Towering hoodoos, up close and personal!

Some of the best views were available from the canyon floor. We took our time walking around and checking out the trail offshoots to see specific hoodoos. Don’t miss the signed spur trail to see the Queen Victoria hoodoo! 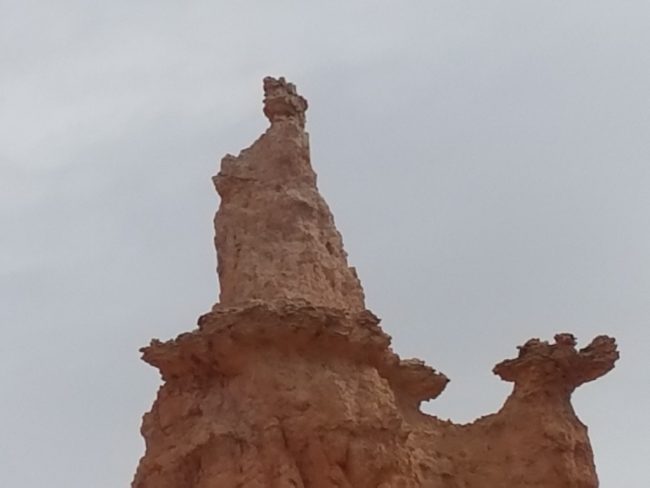 Queen Victoria on her throne

The spot by Queen Victoria had a nice area with some logs to sit on while the kids played in the sand. We stopped there to have lunch before finishing walking through the canyon and beginning our ascent up the Navajo trail. 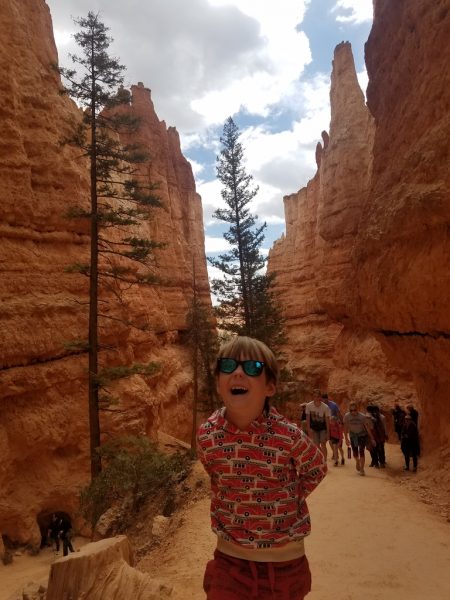 Happy right before our ascent

After a brief walk through some uneventful terrain, we came upon the start of the ascent. Unlike coming down into the canyon, this part of the trail was a series of switchbacks that loomed directly above us. 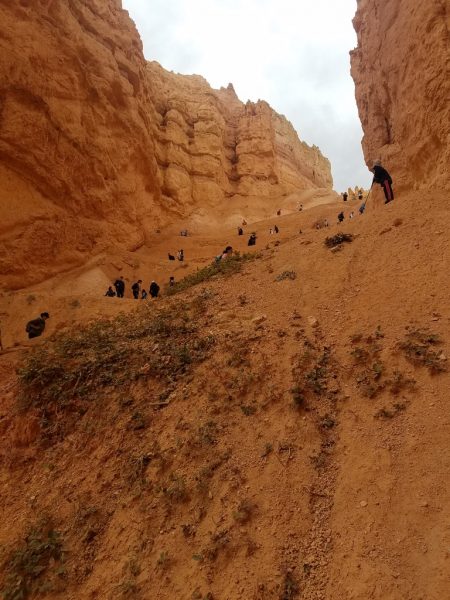 Taking one look at the climb ahead of him, our 3-year-old announced he was too tired to continue and would need to be carried for the rest of the hike. Nooooooo! The afternoon sun was reaching its apex and although the loop isn’t very long (about 3 miles total) the remaining climb was strenuous, especially now carrying an extra 35 pounds of dead weight! It’s also worth noting that Bryce Canyon is at 8,000-9,000 feet elevation, which makes the ascent a bit more challenging. 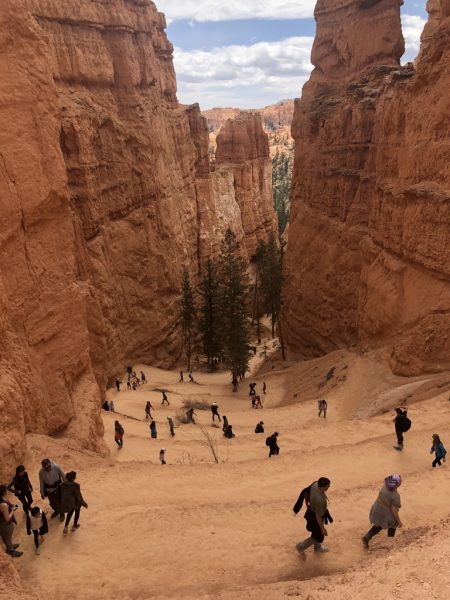 Looking back down the trail

We had almost made it to the top of the canyon and were now fully sweaty. At the top of the switchbacks we were rewarded with another spectacular view. As we continued there was a clear shot of the most photographed hoodoo in the park: Thor’s Hammer. 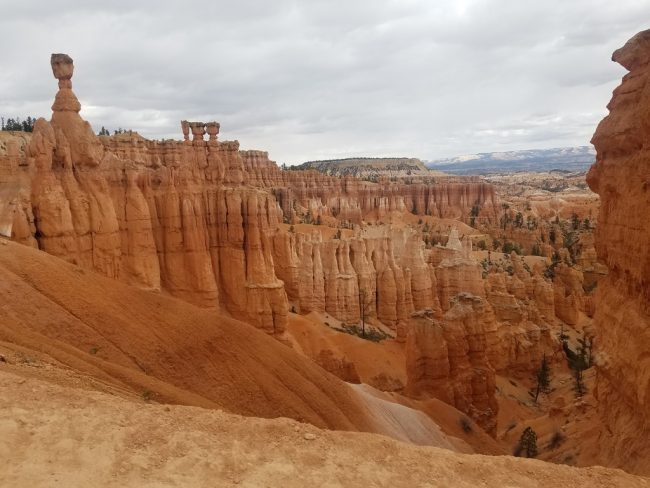 Thor’s Hammer rising on the left

The last bit of the hike does continue to incline, but at least by this point we were off the switchbacks and had a view. Directly ahead and to our left was Sunset Point, which would be our final stop before returning to the trailhead by following the paved portion of the Rim Trail. 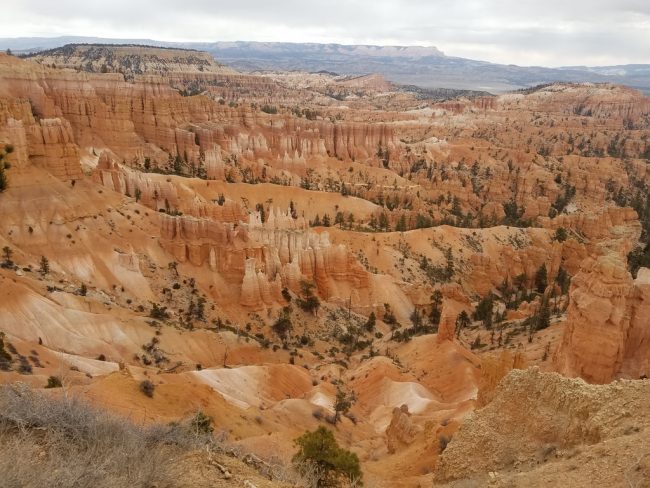 Our final view from Sunset Point

In the end, this hike was an incredible collection of sights and views you won’t find anywhere else in the world. With pleasant walking, strenuous hiking and plenty of opportunity to enjoy nature at your own pace, I think this is a hike that shouldn’t be missed. All in only 3 miles!

We spent the rest of our afternoon driving along the road and checking out other overlooks, but by this point we felt like we had seen the best of Bryce Canyon and most of the hikes we considered were too long or too challenging with the kids. The next morning we headed over to the nearby Kodachrome Basin State Park for something a little different.