One of the problems we faced when planning our Caribbean cruise was how to get from Miami Beach to Port Everglades on public transportation.  Taking a taxi was crazy expensive so this was an important quest for us.  This is our solution!  The following information is also equally valid to travel from Miami Beach to Fort Lauderdale airport.

Why Miami to Port Everglades?

Our Caribbean carnival cruise was departing from Port Everglades in Fort Lauderdale.  Fort Lauderdale is a neighbouring city to Miami and Miami Beach.  It has it’s own airport, but to get from LA to this part of the world,  we needed to fly into Miami.  This was the cheaper, more direct option for us.  It is also the option that interested us more as there are more things to do in Miami.

I have stayed in Fort Lauderdale before.  It is perfectly nice and seems to have a great beach area.  However, it also seemed much like beach areas around the world, and we didn’t come to the US to have experiences that we could have in Queensland.  We were much more interested in exploring South Beach and Miami.  All this means that we had to find a way to get from Miami Beach to Port Everglades.

Initially, this was stressful as I only found information about taxis and shuttle buses which seems to be the normal way that people travel between these places.  At predictions of US$80 for a taxi or US$50 EACH for the shuttle, there was no way that we were going to be able to keep to our budget.  I kept looking.

Thankfully after some more searching, I found that there were bus lines which would get us most of the way from Miami Beach to Port Everglades.  Unfortunately, we couldn’t get all the way on public buses.  We would still need a taxi at the end, but we did manage to save a substantial amount of money by catching two buses most of the way.  These buses took us all the way to Fort Lauderdale airport, so this would also be a great option for people flying in or out of Fort Lauderdale airport who want to go to Miami Beach or Miami.

Take a bus from Miami Beach to Aventura Mall.

This is easy as there is one that travels the whole length of Miami Beach (route 120).  For us, it was a short block away.  We were able to board the bus with our luggage without a problem.  We put the suitcases on a seat as instructed.  It was a easy drive to Aventura Mall.

At Aventura Mall, change to route 1.  This will take you to Fort Lauderdale airport.  This bus leave ten metres from where the other one drops you off and you can’t miss it.  It is s l o w.  It literally seems to stop every couple of hundred meters.  Again, there were no problems with our suitcases.  This bus is for a different county than the previous one, so you can not use the same ticket for both.

From Fort Lauderdale airport, catch a taxi to Port Everglades.  Fort Lauderdale airport is very close to Port Everglades, so it made the sense for us to depart the bus here.  There are plenty of cabs, so we didn’t have to line up long before we got a taxi.  I saw many different prices online for taxis on this route and I soon learned why they vary so much.  The cruise terminal is basically right next to the airport, but there is a document check and then we were stuck in a line before we could be dropped off.  Half of our taxi charge came from this.  You may be able to pay less than what we did if you arrived at a less busy time.

This was a substantial saving from the other methods we found.  It took a bit longer, but it was still reasonably quick.  It was also straight forward, and I would have no hesitations doing it again.

It may sound complicated with kids, but we had no problems.  They love catching different transport, and they didn’t cause us any problems, although it is always slightly stressful getting on and off buses with two little kids and luggage.  We do travel relatively light for a family though, especially a family catching a cruise, so this would have made things a bit smoother for us, but it would still be doable with more luggage. 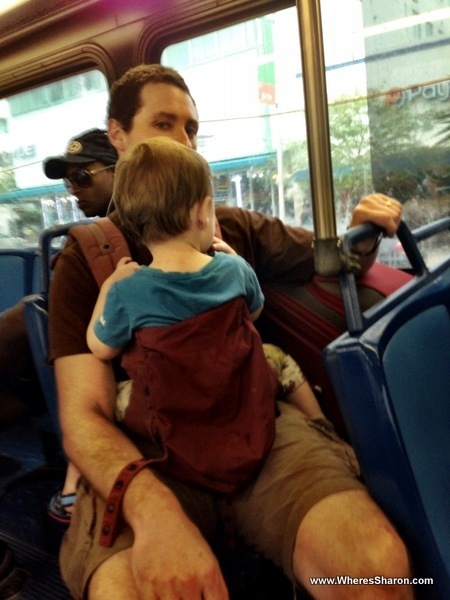 Catching the bus from Miami Beach to Fort Lauderdale Airport

The worst part was probably getting from the bus to the taxis in Fort Lauderdale airport.  This should be a quick walk, but I have never seen crowds like I did in that airport.  People in lines everywhere – it was crazy!  I was very glad that we were not flying in or out of Fort Lauderdale as I think you would wait hours to check in and then the same again to clear security from what I could see.  Yuck.

There is also a train that travels between Miami and Fort Lauderdale.  However, this doesn’t go anywhere near Port Everglades or Miami Beach.  It is handy to Miami airport though, and I caught it last time I went to Fort Lauderdale.  You will still need to take buses if you take this option.

I would love to hear if anyone has any better options for getting to Port Everglades.