Top 10 Things to Do in Bologna!

Bologna. This word used to fill me with the thought of a delicious pasta sauce. Now, it fills me with thoughts of a fabulous city. One that surprised us by being an absolutely fabulous place to visit.

We had just come from Tuscany, an area that was a dream come true to explore. There are so many fabulous places to visit in Tuscany and we had a great time. After that, I did not have high expectations of Bologna. Boy did I have things the wrong way round though – I ended up loving Bologna more than anywhere we went in Tuscany. 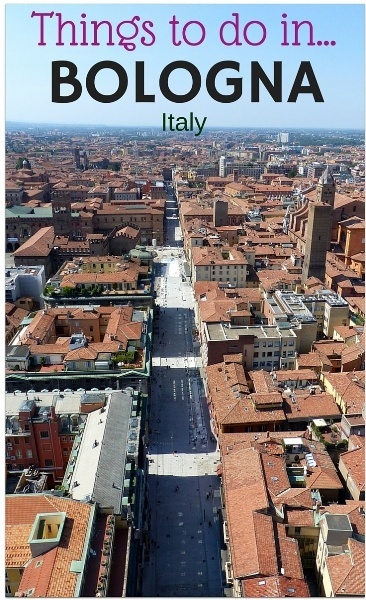 Bologna is a beautiful city. The old town stretches on seemingly forever and it is just so damn nice to walk around. We seemed to keep stumbling upon amazingly decorated building and Bologna felt every bit the university city it is in all the right ways.

Bologna also has a realness to it that I fell in love with. There was no jostling with other tourists. I didn’t realise how much other tourists were getting to me until I was able to walk down the street again without worrying about S walking into a zillion people.

If you are wondering what to do in Bologna then there is actually quite a lot. This was another surprise for me after reading some blog posts about Bologna before we came. They were full of fluff like eat gelato and meet locals. It lead me to believe that there weren’t any actual attractions in Bologna which couldn’t be further from the truth.

To ensure you don’t have the same misapprehension, here’s our list of the 10 best things to do in Bologna as well as some other information to help you enjoy Bologna as much as us!

Top 10 things to do in Bologna

Here’s our list of what to see in Bologna. Another bonus of the best things to do in Bologna is that most are free or close to. You won’t need to much money to explore Bologna. 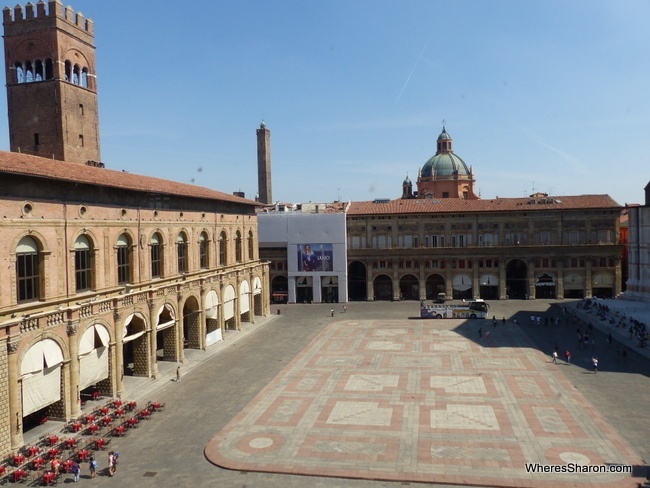 The first thing to do in Bologna should be heading to this main plaza – especially as many roads in Bologna head here. It is huge and a great place to people watch. You can also visit Neptune’s Fountain in the neighbouring Piazza del Nettuno.

There are many Bologna attractions surrounding this square including… 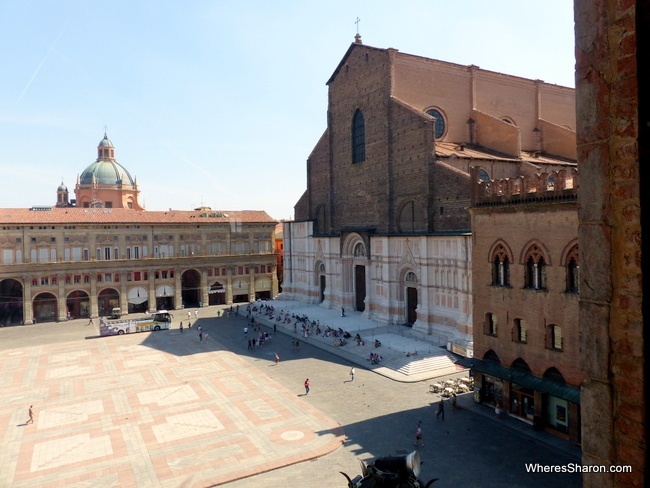 This basilica is actually the world’s 5th largest church and it is massive. It was actually never completed with original plans for it to be bigger than St Peter’s in Rome. 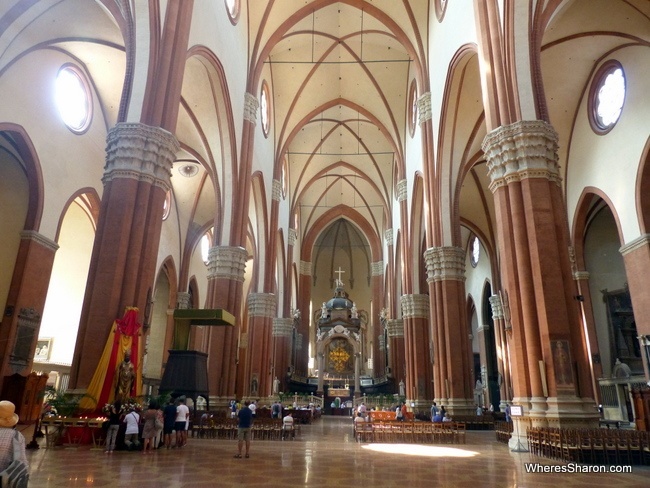 If you want to visit here, I recommend wearing trousers. I was actually asked to leave for wearing shorts! I was a bit annoyed about this as 90% of the people in there were in shorts and short skirts, so I am not sure why I was asked to leave, but keep it in mind.

Entry is free but it costs 2 Euros if you want to use your camera. 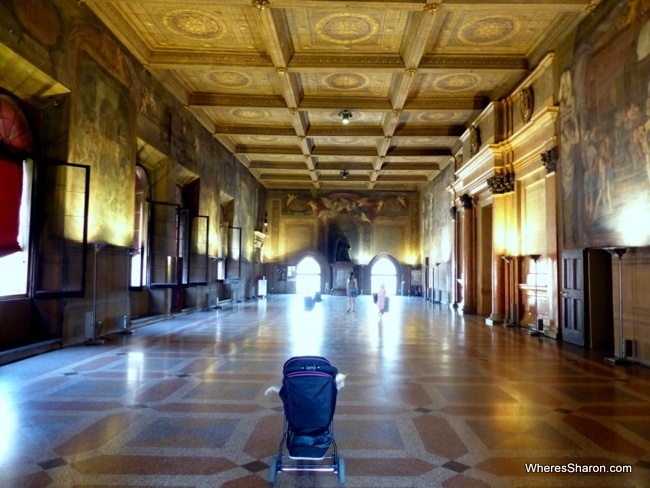 This palace on Piazza Maggiore has been home to Bologna’s city council since 1336! You can walk through and have a look and upstairs there is an art gallery. This has an entry fee for the main galleries but you can check out an amazing entry hall pictured above for free. 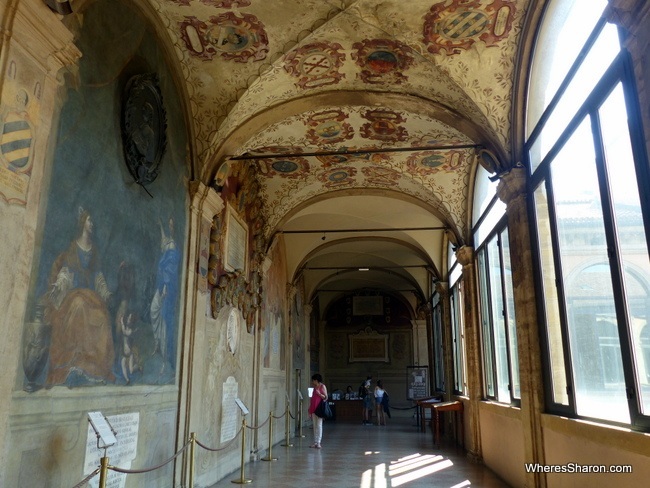 This palace was home to the city’s university from 1563 to 1805 and today is home to a massive library and the Teatro Anatomico – where public dissections used to take place. You can walk into the room and see where the bodies used to lie and surgeons-in-training would watch and learn. 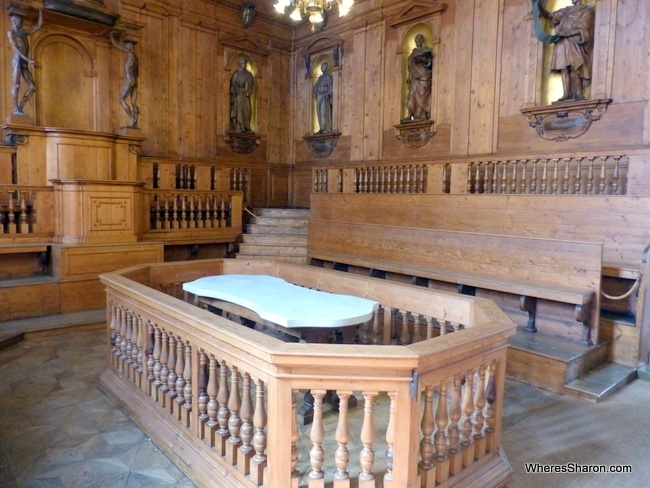 The hallways around the theatre and in the palace courtyard are amazing and worth a look as well.

It costs 3 Euros to enter Teatro Anatomico. It is free for under 18s. You can wonder round some other parts of the building for free. 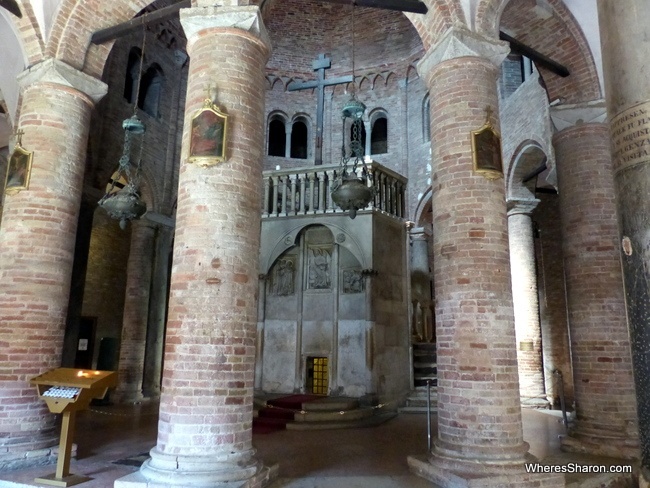 One of the different things to see in Bologna is Abbazia di Santo Stefano. When I first walked in here, I thought I was entering just another church – then I realised this is so much more. It is a medieval religious complex made up of many different churches and religious buildings. 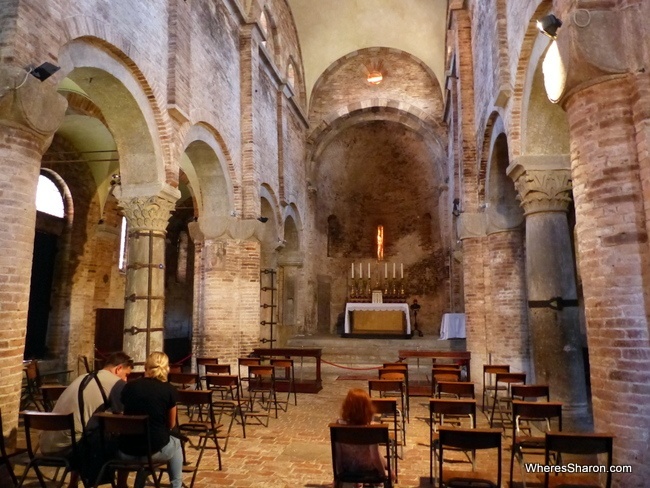 One of the churches is the oldest in the city and there are also tombs of saints. It is unlike any “church” I have entered before and quite interesting.

The Museum of the history of Bologna is top of my list of what to do in Bologna. It is magnificent! It’s modern, interactive and very informative. I walked out of there an expert in Bologna.

There is a funny 3D film, ancient relics and 34 themed rooms. We didn’t take the kids, but I think they would have been entertained by some of it thanks to the interactive nature.

Entry is 10 Euros for adults. 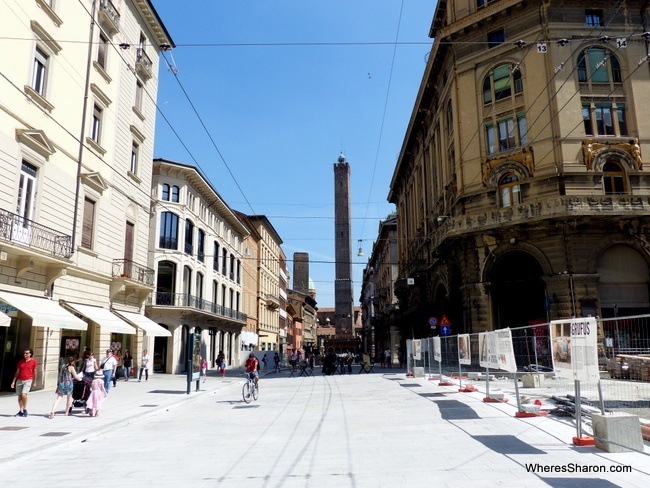 It turns out Pisa isn’t the only place with a leaning tower. One of the top things to do in Bologna has to be visiting these two towers and climbing the Torre degli Asinelli – the tallest one. 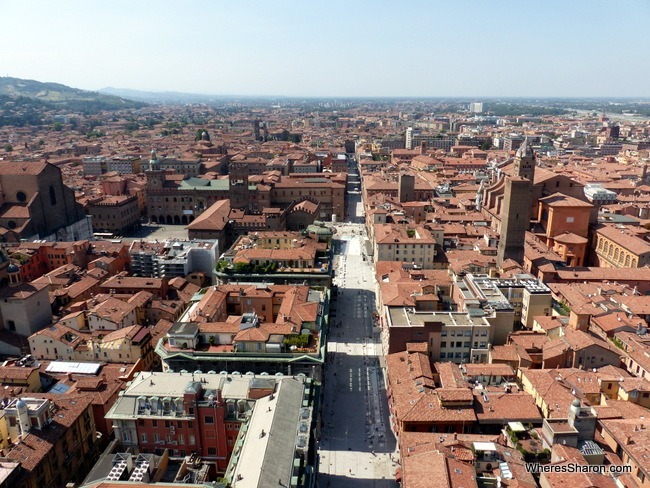 It’s quite a climb at 97.6 metres high! I nearly opted out when I was standing at the bottom and realised just how high it is but actually the walk isn’t that bad. There is a wooden staircase and the stairs are reasonably uniform so it was nowhere near the struggle of some of the towers in Tallin. I’m unfit and walked straight up without a break. I am glad I left the kids at the bottom though.

The best part, obviously, is arriving at the top. There are fabulous views of all of the Bologna things to see and I could look out over seemingly the whole city. It is definitely worth the effort! 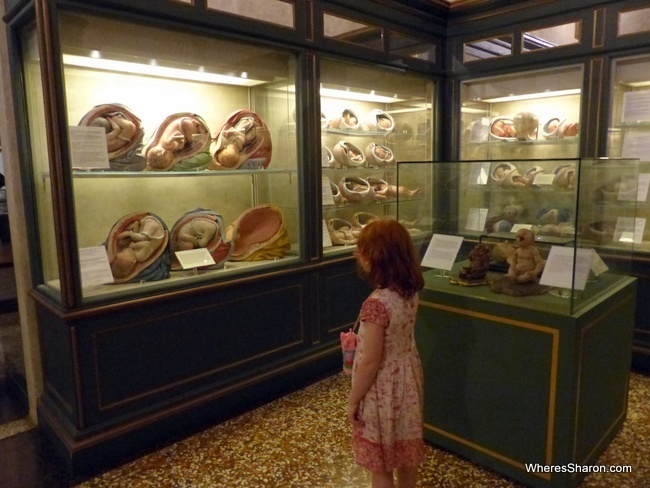 One of our random 10 things to see in Bologna is this museum in the world’s oldest university. It’s quite an ecliptic collection but we enjoyed it a lot. It worked very well for our kids thanks to the collection of animals, many plaster models of different fetal positions and model boats. Miss 5 was fascinated by the obstetrics exhibits and Mr 3 liked the crocodiles and ships. I quite enjoyed it as well

Entry is 5 Euros for adults, 3 Euros for kids, free under 6.

This is another amazing church near the university. There are some well preserved 16th century frescoes by Lorenzo Costa which are worth a look. Unfortunately, photos are not allowed.

There are also many many other churches that are worthwhile places to visit in Bologna. We seemed to keep coming across ones that would be a gem in most other places, but they face stiff competition here to even get a mention. 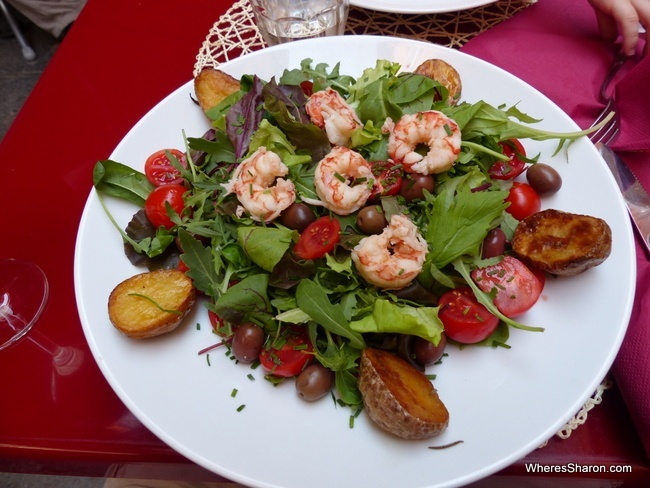 Bologna is known for its food so what choice do you have but to try as much as possible?! Ragu, otherwise known as bolognese sauce, comes from here so you have to at least eat some of that! Well, unless you are vegetarian like me.

There are restaurants everywhere and you will have no problems trying the local dishes although I do recommend trying to go to somewhere that is not touristy – we were disappointed to try the bolognese at one place that was listed on the menu as a traditional dish only for it to come out like it would be served at home.

There are also plenty of local drinks and gelato to help wash down all that food.

We found Bologna a great place to visit with kids, one of the best yet in Italy thanks to less crowds and some random attractions that they enjoyed such as the Palazzo Poggi and S was fascinated by the idea of Teatro Anatomico as well.

Another reason why Bologna for kids worked well for us was our accommodation – it was affordable to get a hotel here with a pool which helped their enjoyment as well! 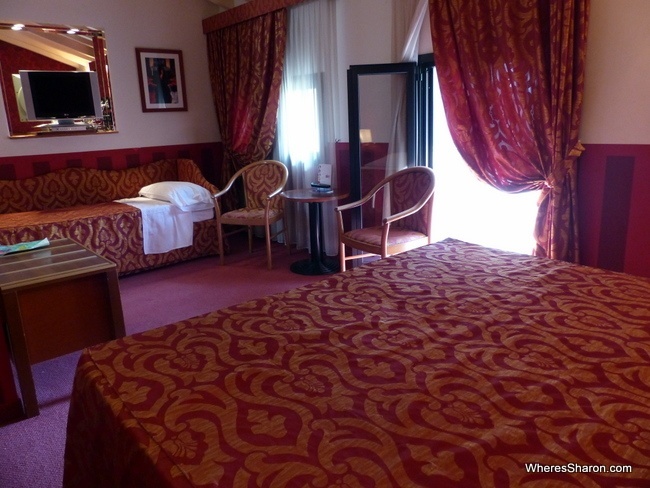 Our triple room at the Savoia Hotel Country House

We visited Bologna as part of our Italy road trip so it was handy for us to stay out of the centre to make parking easier. We found a great hotel for people on a budget.

We stayed at the Savoia Hotel Country House which is a great budget option right next to a bus stop making it easy to get into the centre. It;’s comfortable, quiet and has a great breakfast. What is extra good about this option is that it is next door to its sister hotel, the Savoia Hotel Regency, and you can use the pool at this hotel which is quite a bonus in this price range.

Click here to see the latest prices and more details. 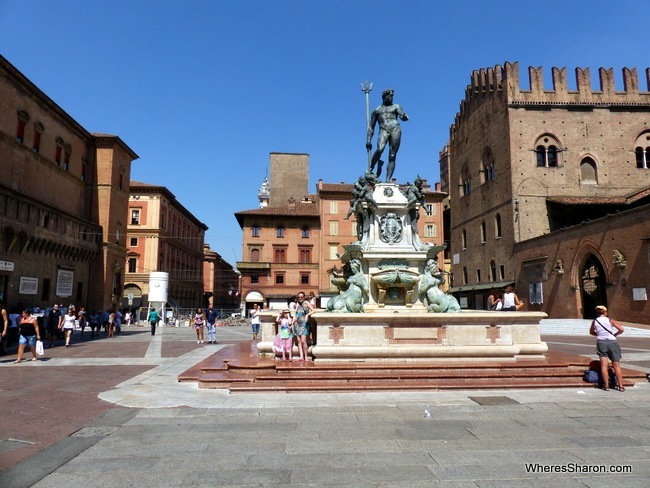 I have actually wanted to come to Bologna since reading a John Grisham novel many years ago that was partly set in Bologna. It sounded like a great place and the seed was planted.

It is just a very nice city. It is nice to hang out and just enjoy! I imagine during term time, it probably has quite a buzz as well thanks to the university. If you can fit it into your Italian itinerary, do it! You won’t be sorry!

You can also read about our onward adventures in Venice and in Tuscany. Our full Italian itinerary and information is here.

Have you been to Bologna? What did you think?