Top 10 Things to Do with Kids in Edinburgh

22 February, 2018
This post may contain compensated links. Find more info in my disclaimer.

The capital of Scotland is on the bucket list of many people.  If you’re travelling as a family then you might be wondering: what are the best things to do with kids in Edinburgh? If so, read on and find plenty of inspiration!

I grew up near Edinburgh and visited quite frequently, but it wasn’t until I travelled with my own kids that I found a side of the city that had more attractions and interesting historical landmarks.  Yes, some attractions may be touristy, but my family enjoyed learning about Edinburgh through its history and museums. 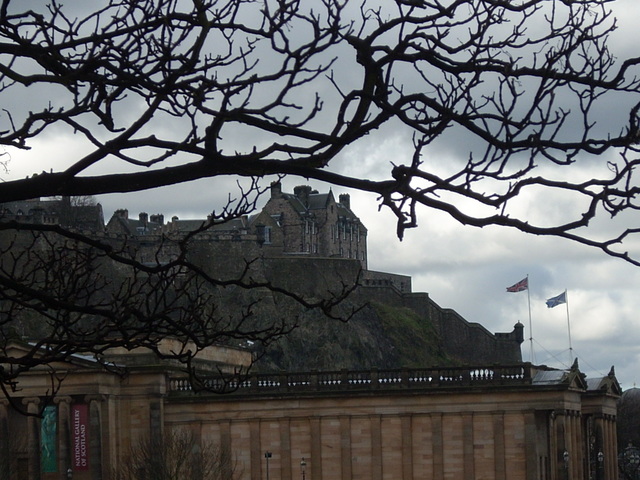 An introduction to Edinburgh

Edinburgh was built on a large, extinct volcano and has played a major role in British and Scottish history for many years.  It is a compact city which is split in to two distinct areas: the old and the new town.  The old town is on a medieval street plan and has windy and narrow streets with tall buildings and, of course, the castle.  The new town is from the Georgian era and is laid out in a more regular pattern with large buildings, parks and a more open feel.  Both areas together make Edinburgh a UNESCO world heritage site.

Scotland is known for its cold and rainy weather and it’s certainly something to bear in mind if you’re visiting Edinburgh with kids.  The best months tend to be the summer and shoulder season – I’d say from May to September – although that does tend to also attract big crowds, too.  Bear in mind that August is festival season with the Edinburgh Fringe Festival (a large arts festival with lots of street performances and shows) and also the Royal Military Tattoo (military bands playing – it’s a big event!) .  This will affect hotel availability and prices and since it’s also the summer holidays for UK children, it’s also busy from that as well.

Winter in Edinburgh shouldn’t be discounted though.  There’s plenty of activities to do that are inside and plenty of coffee shops willing to serve you all hot chocolate to keep warm. Just remember to keep wrapped up as snow is not unheard of – we got some on our trip in April one year! 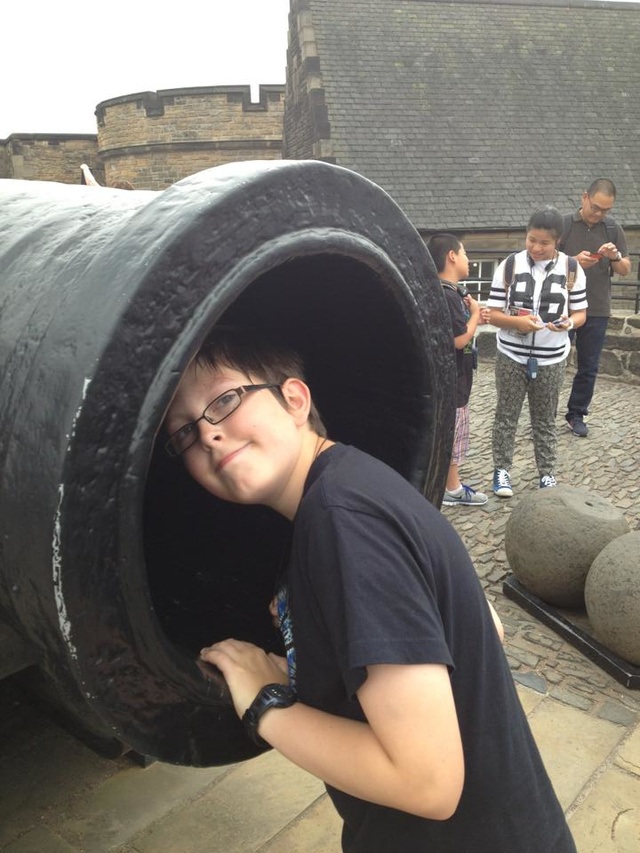 Edinburgh Castle is a “must see” when you’re visiting Edinburgh.  There’s plenty for kids to see and enjoy while there.  We particularly enjoyed looking at all the big cannons (they fire one at 1pm daily – listen for it!) and also the royal jewels.  There are quite a few museum rooms about Scotland at war and its military history.  My son enjoyed these but they didn’t hold my daughter’s attention.

There’s a children’s quiz that you can do which will help keep little minds occupied while visiting the castle. There are plenty of small details to notice. 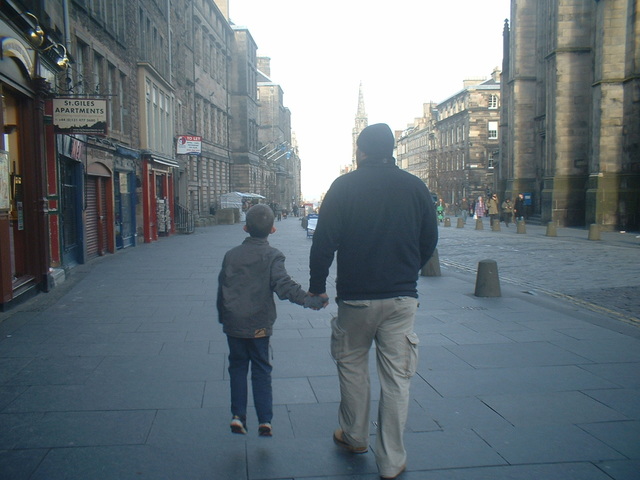 Walking down the Royal Mile

The Royal Mile is the street that leads downhill from the castle to Holyrood Palace and is approximately one mile long.  This is where you’ll find a host of street performers and tourist shops if you’re in to that kind of thing.  There’s an old weaving mill near the castle end that has working looms that produce tartan – it’s basically a tourist shop with some added interesting bits to learn.  It’s free to enter and look around though, so definitely worth checking out.

Halfway down the Royal Mile is a small patch on the ground that has a heart pattern made on it.  It’s called the Heart of Midlothian and when my son found out about it he was desperate to visit.  Apparently it was the site of an old prison (among other things) and people used to spit on it to show their distaste.  Nowadays people spit to bring good luck – my son had to have a go! 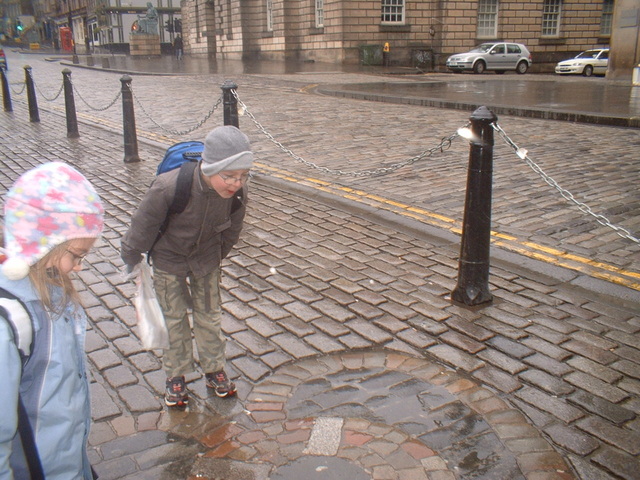 Spitting on the Heart of Midlothian for good luck! I know – nice!

Greyfriars Bobby is a small Skye Terrier that became famous after his master died and he spent the next 14 years guarding his grave.  It’s a lovely story that’s been novelised and made in to a film as well.  We particularly enjoyed a nice picture book about it when my kids were younger and it helped spark a real interest in finding the sites around Edinburgh. 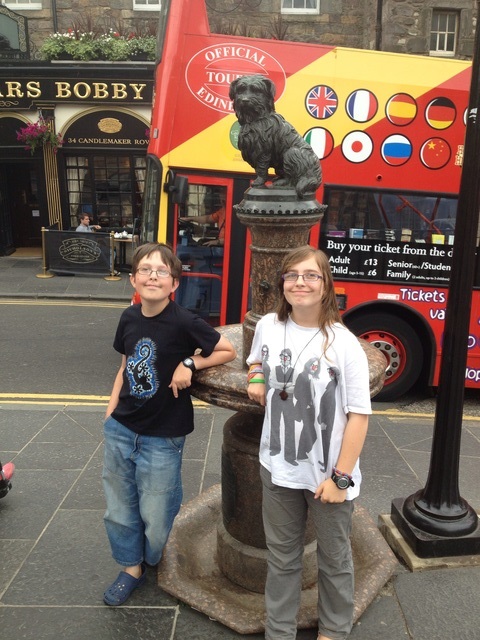 The first thing to find is the statue in the Old Town.  This is near to the Greyfriars Kirkyard which is then then next really interesting place to walk round (unless your kids don’t particularly enjoy graveyards – mine always found them interesting).  The graveyard has the headstone for Bobby and people bring sticks to lay at his grave.

Another excellent free thing to do with kids in Edinburgh is the National Museum of Scotland which is located in the Old Town.  It has all sorts of interesting exhibitions with plenty for adults and older kids to learn about the history of Scotland.

Younger kids will probably enjoy some of the dressing up opportunities and dedicated galleries for them.  It’s a great place to take a packed lunch and if you have some rainy days it’s perfect. 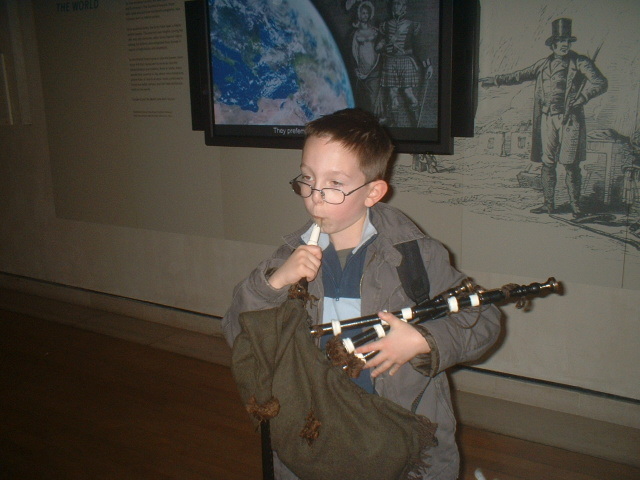 Practicing bagpipes at the Museum of Scotland

Another good museum, and again another free one, is the Museum of Childhood.  Kids love to see what older toys looked like and to have a go as well and adults get to reminisce about toys they used to have.  There’s lots of hands on activities here even though it’s not a huge museum.  It’s situated on the Royal Mile so easy to get to if you’re around that area. 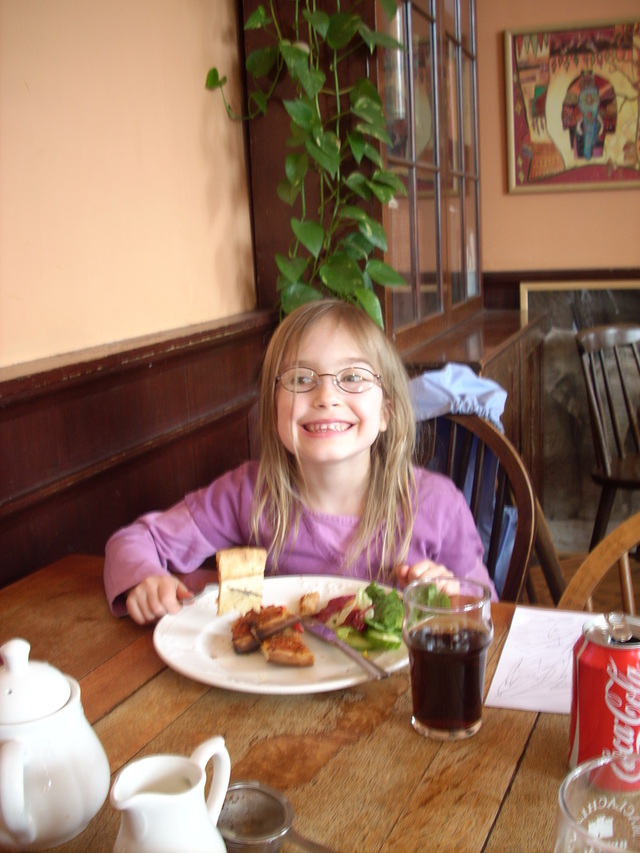 If any of your kids like the Harry Potter books then they may well be interested to visit the cafe where J.K. Rowling wrote much of the early books.  The Elephant House Cafe has a wonderful view of Edinburgh Castle from the back of it – you can definitely see where her inspiration for Hogwarts might have come from!  It can get a little busy inside, but it’s a must for fans and a perfect stop to refuel.

I haven’t done this with my own kids (one is really scared of heights) but I did it myself when I was younger.  The Scott Monument is on Princes Street in the New Town and is the largest monument dedicated to a writer.  It’s dedicated to Sir Walter Scott who wrote books such as Ivanhoe and Rob Roy.

Kids might not know much about the writer but they’ll probably love to see the view of Edinburgh from the top with the bustling streets below and the castle in the distance.  If you need a break afterwards there’s the Princes Street gardens which is a public park where kids can run around.

We don’t often go for the hop on/hop off bus tours because we travel on a really tight budget but for a weekend break where we wanted to make the most of our time there we decided to go for it and it was a great choice.  Great for learning as there’s a special Horrible Histories audio guide for kids to listen to (it’s a British kids book series and TV show that mine love) and there’s some great views from the open top (especially if your kids are scared of heights and didn’t want to do the Scott Monument!).

We used it to travel from the Old Town to the base of Calton Hill and back again.  Edinburgh is quite hilly so little legs can quickly get tired!

If you’ve had enough of the city centre and the crowds then climbing Arthur’s seat will give you much needed space and a spectacular view of the city as well.  Arthur’s Seat is the highest point of Holyrood Park and the whole area is great for getting kids to let off some steam and run around.

It’s not too far from the bottom of the Royal Mile and definitely makes for a slightly different kind of day if you want a change from the more touristy activities. 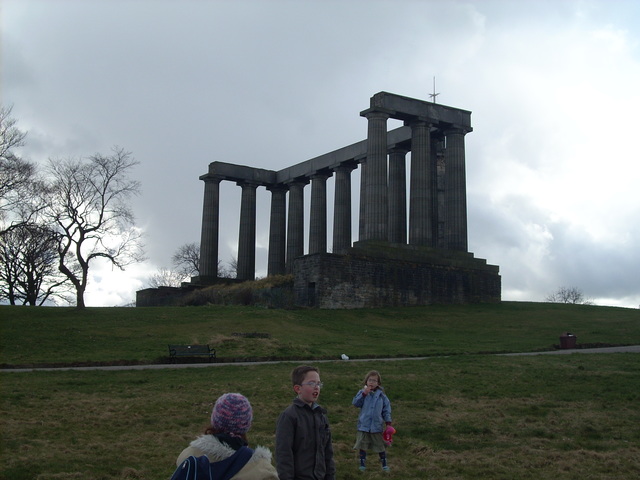 Lastly, we have another option for energetic kids who want to run around – really important on a city visit I think!  Calton Hill is on the east side of Edinburgh and is a place where there’s often shows on during the Fringe festival and it’s also a great place to see Edinburgh from afar.

There’s an intriguing Athenian acropolis at the top which you can see from other areas of Edinburgh too and it’s fun for climbing on.  It was actually never finished – it was a monument to those who died in the Napoleonic wars.

Other things to do in and around Edinburgh with kids

Of course, there’s way more in Edinburgh that kids might enjoy than just these ten!  Here’s a few others that either we’ve done or friends have.

At the base of the Royal Mile is an attraction all about how the earth works and about how nature shapes our planet.  We visited Dynamic Earth quite a few years ago, but my kids really had a fun day out there.

Situated just below the castle and on the Royal Mile, Camera Obscura is a fun place to visit with kids.  It has five floors filled with fun optical illusions, experiences and interactive exhibits as well as a great view from the top.

Museum on the Mound

Another free museum and worth keeping in mind for rainy days is the Museum on the Mound – it’s located in an old bank and it is all about money and how it works.  It’s situated between the castle and Princes Street.

We’ve had so many visits to Edinburgh Zoo over the years and going back to when I was a child, too.  It’s a little bit outside the inner city but it’s easily reached by bus.  Lots of animals to see (we love the penguins!) and it’s one of the better zoos – definitely keep aside a whole day for it.

Ghost Tours in the old town

There’s a lot of history in the old town and you’ll find lots of tours talking about the ghosts and gruesome history of the area.  This is definitely not for the fainthearted or for younger children, but some are actually geared for families like this one. Ghost tours can be a fun way to learn about the place.  Older teens like mine enjoy the regular tours but use your discretion and check with the guides before booking!

Kirsty is one quarter of Barts Go Adventuring, a British family who have spent the last 17 years going on both big and small adventures with their kids in tow.  They love Scotland particularly and have many tales to tell from there.  Their guide to Scotland with kids is worth a read if you’re looking to tour the whole country.  You can follow them on Twitter, Facebook and Pinterest.