Top 10 Things to Do in Dubai with Kids

Dubai is a popular stop when travelling, but for an in-depth guide I turned to Keri from Our Globetrotters. Keri is an Aussie expat mum who has called the UAE home for the past five years. Her family adventures see her travelling around the Middle East and abroad with 3 kids in tow.

I’ve often heard Dubai described like marmite. You love it or you hate it.

For most people, Dubai’s first impression is big, bold and brash. You see rows upon rows of towering skyscrapers, endless shopping malls and bigger-than-life creations between the stunning aqua waters of the Arabian Gulf on one side and vast, untouched desert plains on the other. 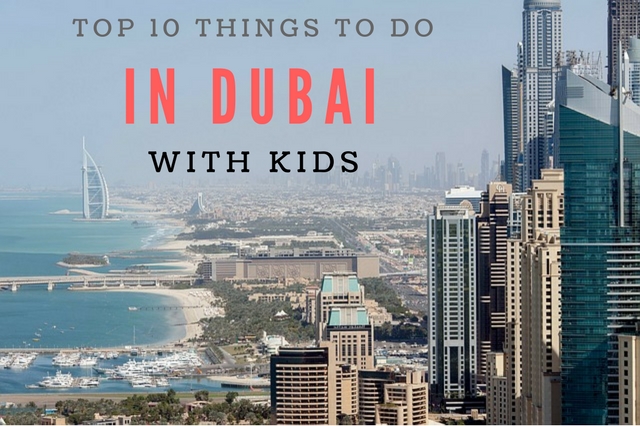 When it comes to family-friendliness though, it’s hard to beat a city like Dubai. It’s literally busting at the seams with indoor and outdoor activities to do with kids. Depending how long you have in the country, your problem might be how to fit them all in!

I’ve pulled together my top 10 picks for making the most of a stopover in Dubai, but the list doesn’t end here! I also recommend making a trip to Abu Dhabi if you’re in the UAE for more than a few days. 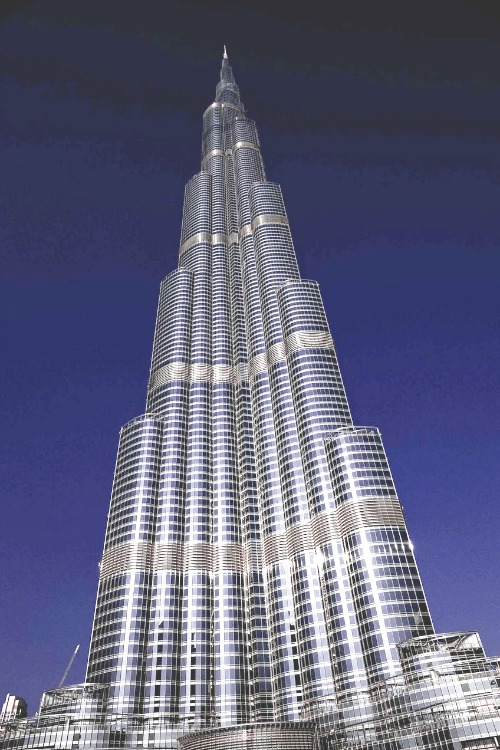 It’s hard to come to Dubai and not mention the world’s tallest tower! The Burj Khalifa at a staggering 830m is currently the tallest in the world and visitors can come to the 124th and 125th floors to see the spectacular views. Be warned though, book tickets in advance as they cost about 4 times as much at the door, so be sure to book ahead of time. Popular sunrise and sunset tickets sell fast. Also expect an awful lot of queuing at peak times – but those views are worth it! 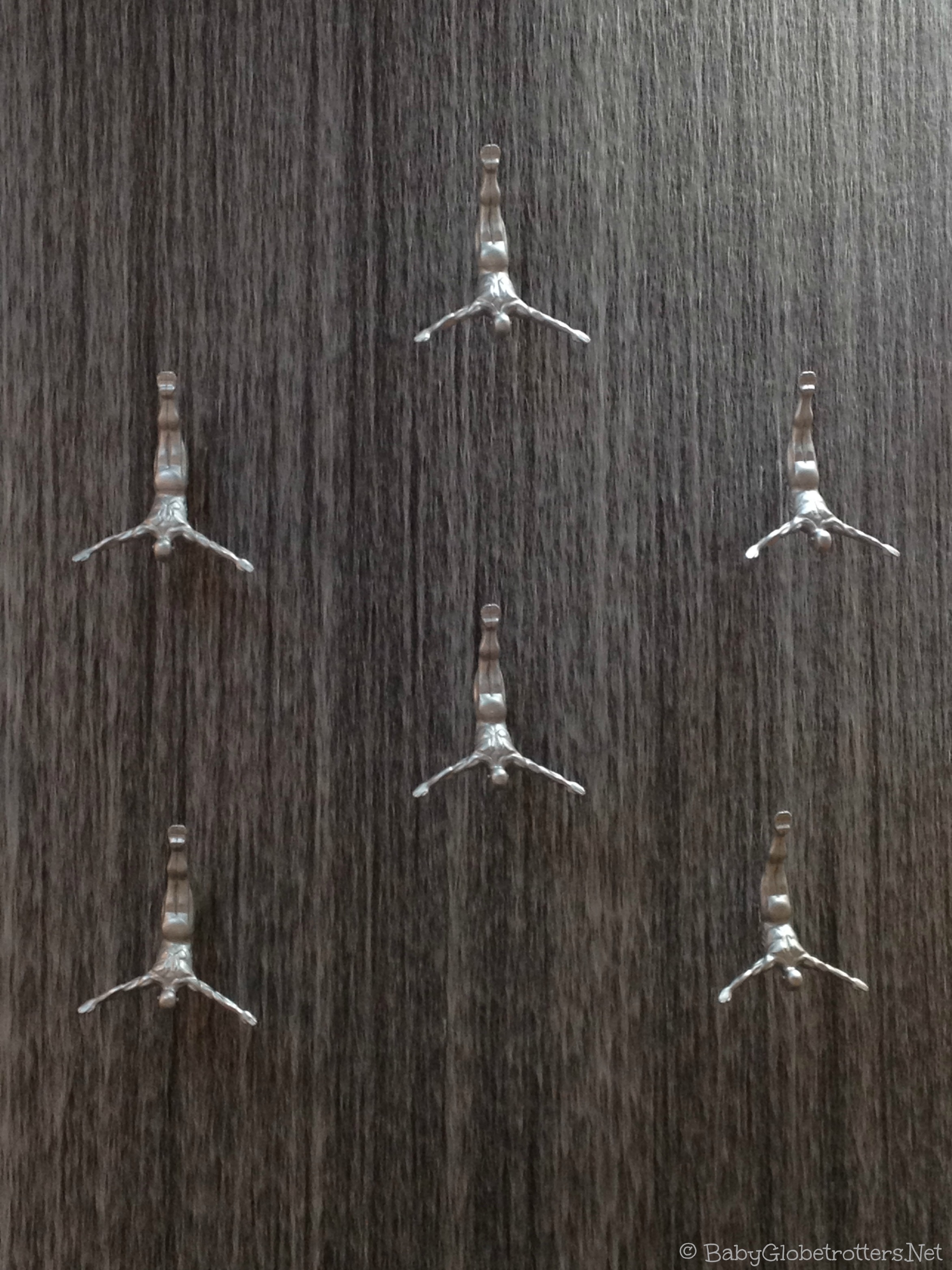 Waterfall divers at the Dubai Mall

How convenient that the world’s largest tower is attached to the world’s largest mall – by square footage at least, if not by shops! There’s a lot more to Dubai Mall than just shopping though. It’s a family entertainment mecca! Catch the spectacular free waterfall inside and the free half hourly water fountain dancing show outside. Browse for gifts in the giant Hamleys and The Toy Store. For-pay activities include the Aquarium, KidZania Dubai, Caboodle and even an Olympic-sized ice skating rink! You can get combined tickets for some of these attractions with Burj Khalifa entry tickets. 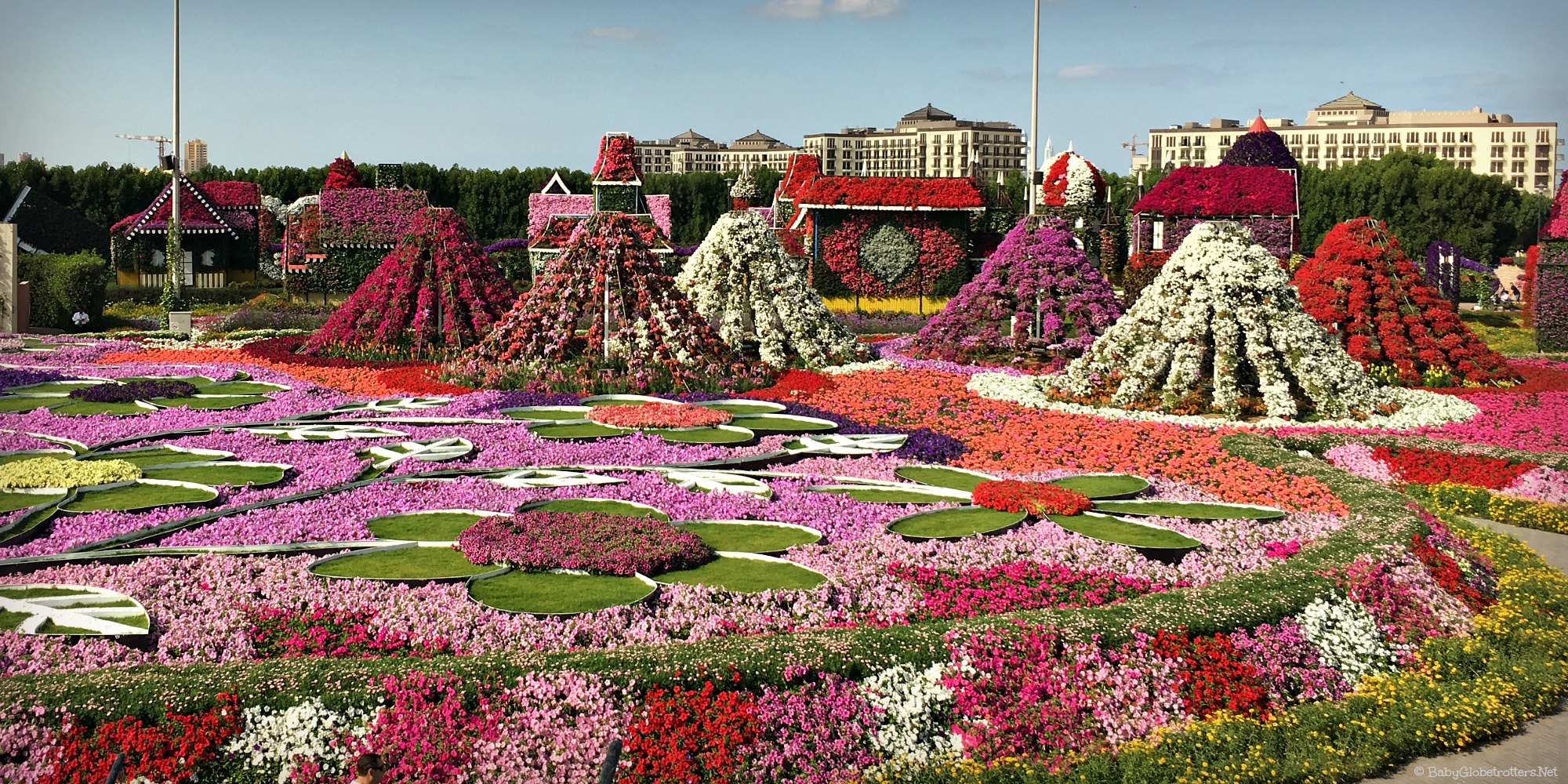 Dubai Miracle Garden is a seasonal spectacular that runs from November to April each year. The creative gardening team works hard throughout the summer to create new floral displays each year to wow the crowds. The park itself isn’t massive but it does claim to have the largest number of blooms (even though they are almost all a single flower type). Last year’s center stage was a life-size Emirates A380 aircraft – made entirely of flowers, of course! Next door you can find an impressive butterfly garden if you want to fill a day this corner of the city. Go early to avoid crowds.

Opening its doors in 2016, IMG Worlds of Adventure surpassed Ferrari World in Abu Dhabi to become the world’s largest entirely indoor theme park. Aimed at older children and thrill-seekers, there are four zones to explore including Cartoon Network, Marvel, IMG Boulevard and Lost World. It’s the perfect place to visit mid-summer to escape the heat.

It’s hard to believe this spectacle really exists, but yes, a man-made palm-shaped sand archipelago has been built off the coast of Jumeirah: the Palm Jumeirah. Accessible by road or monorail it is packed full of luxury apartments, villas and hotels.  Most come out here to see its crowning glory, Atlantis the Palm with its water park, giant aquarium and Dolphin Bay. A brand-new attraction has recently opened, the 11km Palm Jumeriah Boardwalk built over the breakwater on the palms outer crescent. Expect new food trucks, cafes and piers to open there soon – perfect for a family stroll. 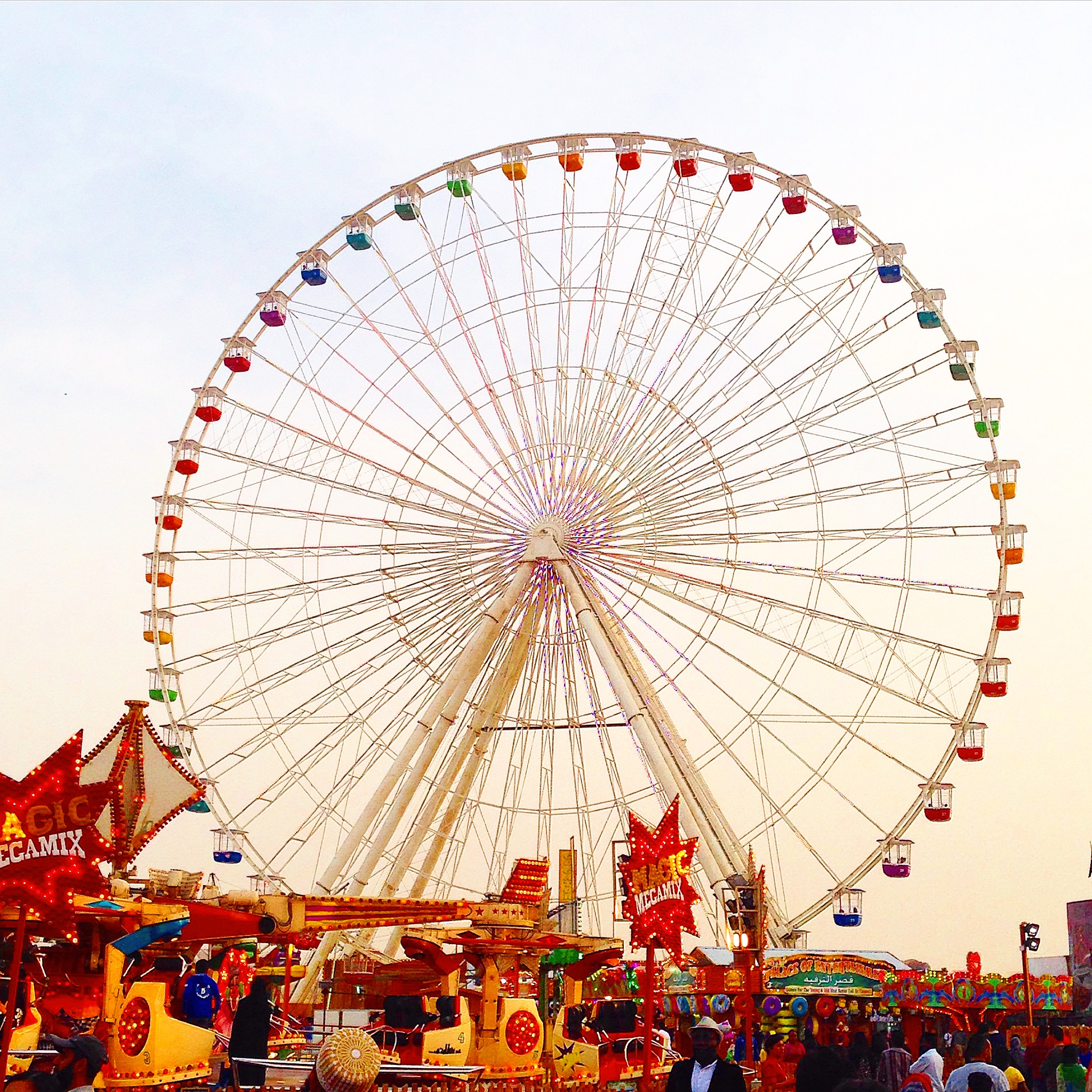 Global Village Dubai really needs to be seen to be believed! At the outskirts of the city, this seasonal extravaganza is open every November to April. The best way to describe it is like a giant fairground. Over 70 countries are represented with pavilions to showcase their crafts, food and culture. Set in the middle is a giant show stage, with a canal for boat rides and a huge range of carnival-type rides. The Global Village is worth it for the people-watching alone. But be warned: the weekends (as well as Thursday and Friday nights) can be intensely busy. Entry is quite cheap but the rides can be costly. 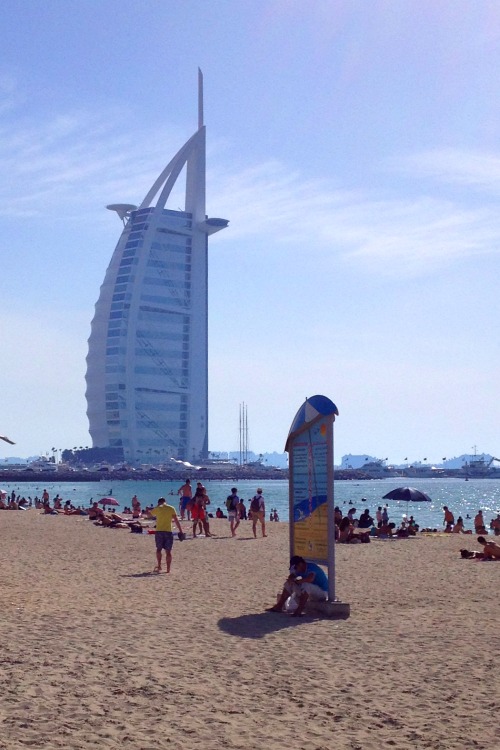 We have to mention the beaches in Dubai, right? Despite all of the “world’s largest” attractions, the crystal blue waters really are Dubai’s crowning glory. There are several spots to choose from including the ever popular Umm Suqeim Beach, also known as Sunset Beach – you know, to take THAT photo of the stunningly iconic Burj Al Arab. A great location for families is The Beach at JBR, crammed full of family-friendly facilities and even a splash park! Another favourite with expat families and sport enthusiasts is Kite Beach. Note: Be sure to research beach information by day of the week because some park beaches have ladies-only days. As for attire, some beaches require you to be nearly covered up while others allow anything short of going topless. 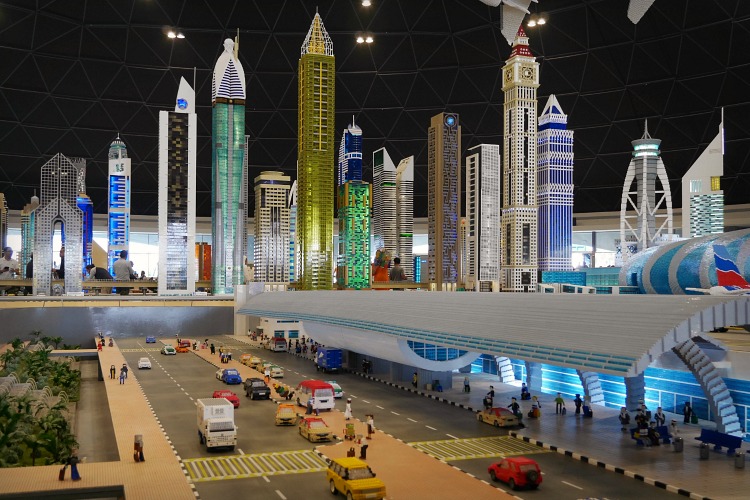 The latest larger-than-life spectacle is Dubai Parks & Resorts.  The first stage of this new development is slightly out of town in an area called Jebel Ali. The attraction includes 3 theme parks (Legoland, Dubai, Bollywood and Motiongate), a Legoland water park and the Polynesian-themed Lapita Resort. These properties are interconnected by Riverland, a beautiful entertainment precinct made to look like a French village. This has definitely become one of my favourites (see what I thought of the opening of Legoland Dubai), though if I’m honest I think Motiongate was the family favourite, with rides from movies like Dragons, Shrek, Kung Fu Panda and Ghostbusters!

Take in some culture

Options are improving beyond the normal guide book advice to “see the Dubai Museum & Al Fahidi Fort, wander the streets of Bastakiya, take a dhow over Dubai Creek to Deira to see the gold and spice souks.” Of course, you should do these cultural activities if time/energy permits, but they won’t necessarily enthrall children!

The UAE is still a very young country and the transition of Dubai from a humble fishing village to mega-city has been rapid. Arrange a trip to the newly opened Etihad Museum to see and hear the story of the birth of the nation. For a full guide to finding cultural events across the Emirates, read Our Globetrotters’ article on finding culture in the UAE. 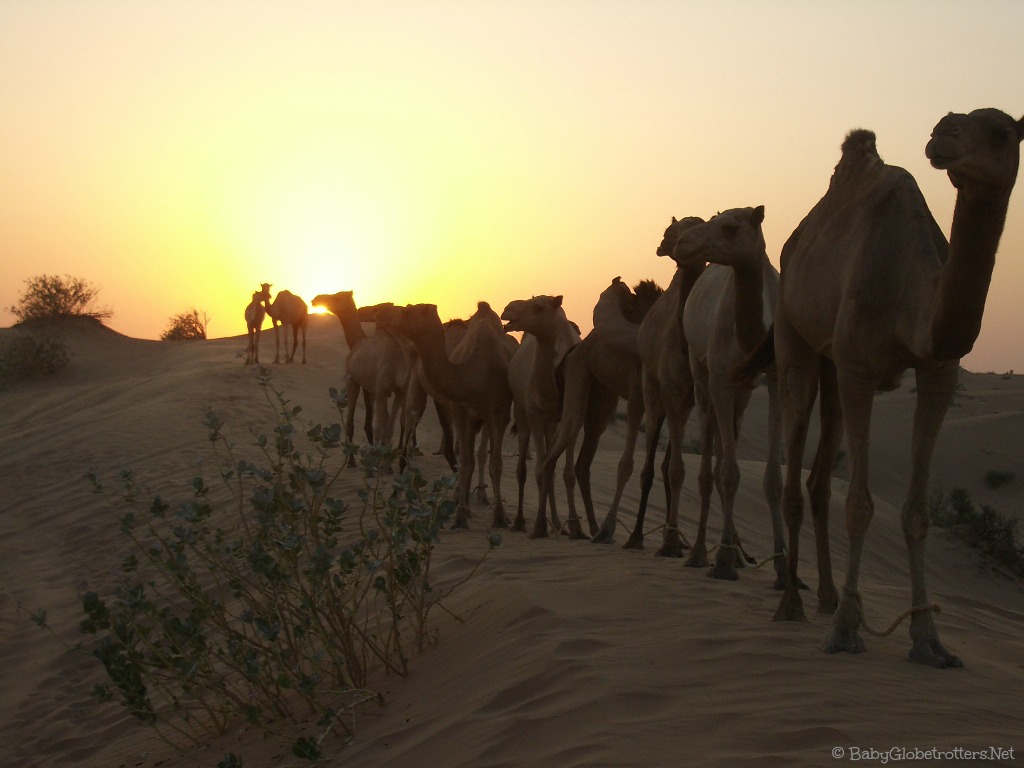 Camels in the Dubai desert

The biggest mistake you can make on your first trip to Dubai is to not go out and see the desert! If you leave Dubai having only seen skyscrapers, you are missing the true essence of the country. There are a number of companies that offer afternoon and evening safaris, but to be honest most are gimmicky and touristy. We prefer tours run to the Dubai Conservation Reserve, but there are many options. Look for a tour that will pick you up directly from your hotel door. Once in the desert you’ll be presented with a few motor sports like dune bashing, quad biking, sand boarding and even camel riding. These activities are normally followed by a traditional tented dinner and evening entertainment, including henna painting and belly dancing (not a UAE tradition, I know!).

There are several districts that are appropriate for families, depending on how long you are staying and what you wish to to squeeze into your adventure. Some favourites hotels, due to their close proximity to water parks, are Jumeirah Beach Resort and Atlantis the Palm.

If you’re planning a slightly longer stay, hotel apartments around Dubai Marina are another popular choice for their proximity to The Beach and the Walk. These also allow you the flexibility to have a little extra space and a kitchen.

However, if you’re only on a short stopover in Dubai, base yourself around downtown and the Dubai Mall – if you want a real splurge, try the Address with its infinity pool and unrivaled views of Burj Khalifa. Or why not actually stay in the Burj, at the Armani Hotel!

For more details and links, read our complete guide to the best family hotels in Dubai. 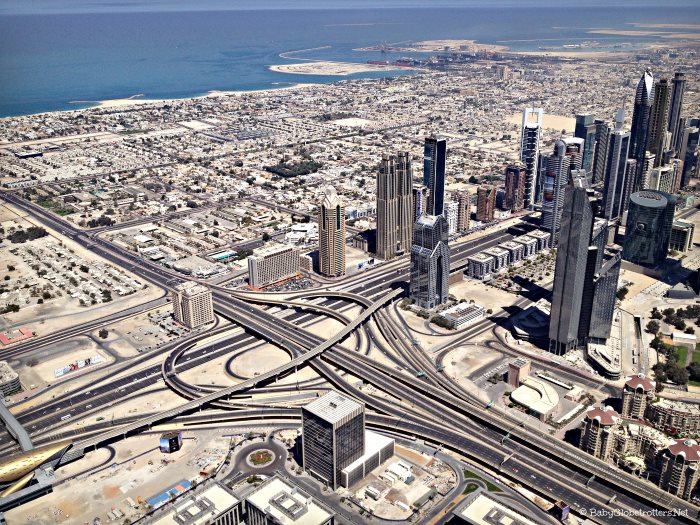 View from the Armani Hotel in Burj Khalifa

Dubai has become quite a large city, one that is starting to groan under its own weight. It used to be easy to get from point A to B. While it’s still very easy to catch a cab, don’t be surprised if you end up stuck in traffic! The main arterial road through the city Sheikh Zayed Road can turn into a car park during rush hour.

Relative to the rest of the world, though, taxis are quite cheap and easy to come by. The Metro is also efficient and cheap, but won’t necessarily take you directly to the places listed here.

Car service Careem is popular with families as it offers car seats (new laws now make it compulsory to have car seats for under 4-year-olds, though I’ve yet to see it enforced).  All taxis from Dubai International Airport should be able to fit borrowed car seats from the airport, but given the way people drive I’d recommend taking along your own fold-out booster or car seat if possible. 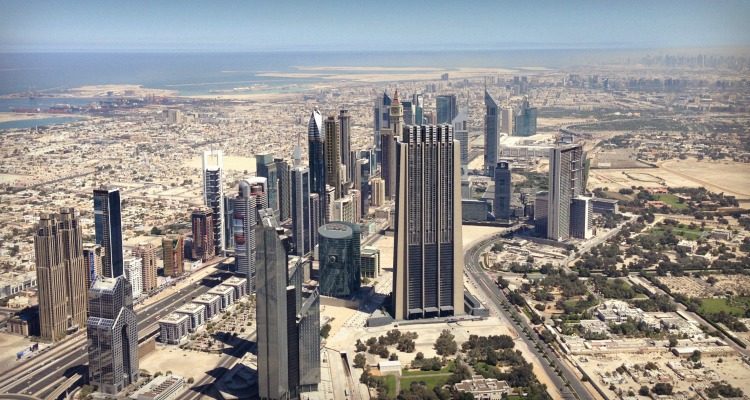 Other things to know before visiting Dubai

It should go without saying, but Dubai is in the middle of a desert and temperatures can get HOT. Expect daytime temperatures in the summer (July-August) upwards of 45c/113F. On the plus side, this means a lot of hotels massively discount their prices at these times so look for a great deal! Just be mindful that it is too hot to be at the pool/beachside during the middle of the day and life moves indoors and to the evenings (Dubai has a “stay up late” culture year-round). The best time to visit is late October through to April when most of the seasonal and outdoor events are on.

UAE is also a Muslim country. Although in recent years I’ve seen the standard of dress in public slipping, always be mindful and respectful to avoid problems. I’d suggest covering shoulders and knees in public for adults and avoid public displays of affection. We have a detailed guide on etiquette and what to expect culturally – especially important during the Holy month of Ramadan.